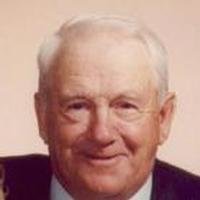 Jacob D. Letkeman Tuesday, Aug 1, 2006, Jacob David Letkeman of Steinbach, age 92 passed away at the Rest Haven Nursing Home to go home to spend eternity with his Lord and Saviour. Dad was born on September 17, 1913 in Michaelsburg, Fuerstenland in Russia, to David Jacob and Helena (Leppke) Letkeman. Dad was baptized upon the confession of his faith on March 10, 1935 by Rev. Johann P. Klassen into the Schoenwiese Church. Dad first met his future bride Anne Neudorf in Foxwarren, MB and on Easter Monday, April 22, 1935 the two were married. After the wedding they returned to Beulah where Dad was farming. Dad and Mom’s four oldest children were born while they lived in Beulah. In 1952 they made a move to a farm in the La Broquerie area, where the youngest three daughters were born. It was also at that time that they joined the Steinbach Mennonite Church. In 1969 they sold their farm and moved to Steinbach where mother passed away in 1984. He leaves to mourn his passing three sons: David (Mary) of Medicine Hat, AB, Jack (Irene) of La Broquerie, Jerry (June) of Plum Coulee and three daughters: Mary Jane (Walter) Esau of Abbotsford, BC, Chris (George) Wiens of Steinbach, Linda (Ron) Buhler of Mitchell, 24 grandchildren, 26 great grandchildren and five great great grandchildren. He is predeceased by his parents in 1919 and his brothers David (1925), George (1972), first wife Anne (1984) and second wife Mina (2002) and infant daughter Linda in 1956. The funeral service will be held Friday, Aug 4, 2006 at 2 p.m. at Birchwood Funeral Chapel, with interment to follow at Memorial Cemetery. The family would like to thank the caring staff at Rest Haven Nursing Home for their tender love, compassion, and care that they extended to Dad and to us, the family. “Schloap schein, Dad, schloap schein”