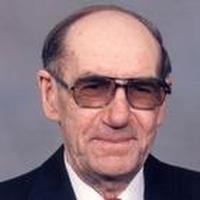 John P. Froese On August 8, 2006, John P. Froese passed away peacefully at the Bethesda Hospital in Steinbach. He reached the age of 88. He leaves to cherish his memories, one daughter Caroline Hiebert of Blumenort, three sons Pete (Linda) of Mitchell, Harold of Blumenort and Dennis (Michele) of Grand Forks, BC, nine grandchildren, 14 great grandchildren, four foster great grandchildren, one great great grandchild, three sisters and two brothers. He was predeceased by his wife Gertrude (Nikkel) Froese October 10, 1992, grandson Ron Froese June 7, 1993, granddaughter Phyllis (Hiebert) Harder May 11, 1998, his parents Peter J. Froese November 11, 1985 and Barbara (Dueck) Froese May 27, 1964, four sisters and one brother. The funeral service will be held Sun, Aug 13 at 2 p.m. at the Mitchell Chortitzer Mennonite Church with interment at the church cemetery. Viewing will be held at Birchwood Funeral Chapel on Sat, Aug 12 at 7 p.m. with a devotional at 7:30 p.m. and at the church prior to the service.