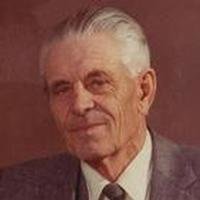 JOHN VOTH 1911-2006 John Voth of Steinbach, MB died peacefully on Friday, November 24, 2006 at the personal care home in St. Adolphe. He was 94 years old. He leaves to mourn his passing one daughter Edith, one son John and his wife Frances, grandchildren Neill & Aynsley Strocen, Erin Strocen, Steven Voth, Morgan Voth, Gillian Voth and one great-granddaughter, Allie Cornelia Strocen. John is survived by one sister Alice (John) Dueck of St. Anne's and one sister-in-law Katherine Berg of Winnipeg and many nieces and nephews. He was predeceased by his wife Cornelia (Nellie) in 1999, his parents, five sisters and one brother. John Voth was born on December 11, 1911 in Sagradowka, Russia. He was the oldest of eight children born to Johann and Anna (nee Nickel) Voth. He emigrated to Canada with his family in 1927, living first at St. Elizabeth, Manitoba, then on the farm near Landmark. He married Cornelia Hildebrand in 1947. Together they farmed until 1981, when they moved to Steinbach for their retirement years. John was a hardworking and devoted husband, father and grandfather. He enjoyed talking to people, telling stories, playing dominoes and watching hockey games. He loved having company and found great joy in his grandchildren. John was a member of the Steinbach Mennonite Church and spent his last years living at Woodhaven in Steinbach. Our thanks to the staff at Steinbach Bethesda Hospital and the staff at the St. Adophe Personal Care Home for the care and attention they gave to our father. Public viewing will be held at Birchwood Funeral Chapel on Monday, November 27, 2006 at 7:00 PM with a devotional at 7:30. The funeral service will be held Tuesday, November 28 at 2:00 PM at the Steinbach Mennonite Church, 345 Loewen Blvd, Steinbach, with interment at the Heritage Cemetery.