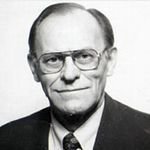 REV. HUGO W. JANTZ slipped quietly out of this life at the Riverview Hospital on August 12, 2006. He was born to Henry and Lena Jantz on March 5, 1930 in Laird, SK to immigrant parents from Soviet Russia. Blessed with a cheerful, outgoing nature, he enjoyed a happy childhood in a growing family where work and play, and church and school, held integral roles. His mother by her loving openness and story-telling and his father by his integrity and practical example prepared him for a Christian faith pilgrimage that continued all his life. The Mennonite Brethren Church in which he grew up became his spiritual home with baptism at the age of 14. He enjoyed school and began a lifelong practice of wide reading. He went to the high school of Prairie Bible Institute in Alberta to take his final three years there. The family moved to Ontario in 1947. A courtship that spanned a half dozen years and was sustained by hundreds of letters while he took Bible school and Bible college studies and then accepted a Bible school teaching position in the Fraser Valley, led to his marriage to Katherine Goerzen in 1954. Since those early years, his life in one way or another has involved public ministry. In 1956, the young couple moved to Quito, Ecuador to join the German department of a missionary short-wave radio station, HCJB, the Voice of the Andes. After further studies, they were asked in 1961 to assume pastoral work in Neuwied, Germany, among refugees from Russia, Poland and Prussia. These were years of spiritual and intellectual growth. They stayed for five years. Then followed eight years of teaching at Columbia Bible Institute in Clearbrook, BC, during which the last of seven childrensix daughters and a sonwere born. He was also assistant pastor in two churches and began graduate studies. In 1974 the family moved to Winnipeg to the pastorate of the Fort Garry Mennonite Brethren Church and in the years that followed he first pastored, then worked for the Mennonite Brethren Bible College and then Mennonite Brethren Missions/Services in church relations. During those years he also began a ten-year role on the board and executive committee of MCC Canada and MCC International, several of those as chair and vice-chair. In 1985, he and his wife began the first of three stints of pastoral service in Europe, as well as five years as director of MCC's European programs, aimed particularly to eastern Europe. A brief time of interim pastoral work at the Maples MB Church and a longer term as pastor of Douglas Mennonite Church completed his formal ministry, with retirement in 1996. Since that time he has spent many hours in volunteer work, with children and grandchildren, and doing occasional preaching. He and Katherine were privileged to celebrate their golden wedding anniversary in 2004. He suffered a lengthy illness that ended early Saturday. Despite much pain, he enjoyed many visitors and especially the presence of family. A highlight was a blessing service in May at which each could share their appreciation with him. He is survived by his wife Katherine, six daughters, Janet and Tim Kroeker, with Thomas, Ellen, Lauren and Annika; Eliana (Bob Davidson) Jantz, with Levi and Sara; Carol Jantz, with Julian, Alison and Natasha; Angelika Jantz and Walter Nikkel, with Jacob and Adam; Marianne Jantz and Floyd Olson, and Sonya Jantz and Matthew Lawrence, with Madeline, Joseph and Sunny; and son, Robert (Cindy Mann), with Kate and Jenna. Funeral services will be from the Sargent Avenue Mennonite Church, Wednesday, August 16 at 10:30 a.m. with a viewing Tuesday evening from 7:00 to 8:00 p.m. at the church, with a devotional at 7:30 p.m. In lieu of flowers, donations may be made to Mennonite Central Committee.