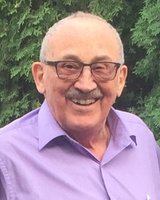 He was predeceased by his first wife, Rita Martens (nee Peters) in 1983 and his brother Henry Martens, earlier this year.

He is survived by his wife, Linda Martens (nee Schinkel) and his two daughters:

Daughter Karen, married to Ernie Klassen with their 3 children:

Brent, married to Carrie with children Gavin, Grace and Liliana

Sheldon, married to Janelle with children Easton, Emma and Bryton

Daughter Brenda, married to Reg Judd with their 7 children:

Tyler, engaged to Tiffany with children Danika and Christian

Abe was born into a farming family located in Starbuck, Manitoba.  When he was in the eighth grade, the family relocated to a farm in the Chortitz (Randolph) area to be near a Mennonite community.  Abe was baptized at the Steinbach Mennonite Church in his late teens.  Abe and Rita met at the church and attended youth group together.  They were married on April 9, 1961 and lived in Steinbach where they were blessed with two daughters.

In 1969, they accepted an opportunity to move to Brandon where he was a sales rep. in a new area for Loewen Windows.  They enjoyed many years in Brandon but decided to relocate to the family dairy farm, Herbsigwil, in 1975.  The farming lifestyle was very different from his time in sales and they decided he would go back to work for Loewen's.  This meant a move to Calgary, Alberta in 1978.  Abe started in sales again and worked his way up to be the branch manager.  In 1982, Rita was diagnosed with cancer and passed away in July of 1983.  Abe was not the type of person to enjoy living alone.  He met Linda and they were married on March 10, 1984.  In 1988, Abe decided it was time for a new adventure and Loewen's sent him to Sudbury, Ontario to open a new franchise.  After nine months the project was complete, and the decision was made to leave Loewen’s and move to Steinbach.  Here, Abe entertained himself by building a home and barn on an acreage and spending five years selling real estate.  In 1989, Abe and Linda spent a year in Mexico in mission work.  His retirement years were spent by working in summer at Farmyard Supply and at the Mennonite Heritage Village Museum and enjoying winters in Arizona, 22 years in a row.  Abe passed away peacefully on Saturday, July 18, 2020 at the St. Boniface Hospital in Winnipeg with his two daughters at his side.

This is not goodbye, just goodbye for now.

The private family funeral service will be available to view via livestream on Thursday, July 23, 2020 at 2:00 p.m.