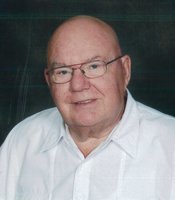 Yves Lafrenière, age 79 of La Broquerie, passed away peacefully on February 26, 2021 at the Bethesda Regional Health Centre in Steinbach, MB.

In 1961, Yves married Denise in Notre Dame de Lourdes and began his Co-op career. He then spent 6 years in St Joseph before he moved the family to La Broquerie in 1970. Yves was the General Manager of the local Co-op until his retirement in 2009. He achieved 47 Years of Service for the Co-op.

Yves was the president of the Arena Board for many years and volunteered his time to the Club Sportif canteen. He dedicated his evenings as president of the HTHL and HTJHL, both at the same time, for several years. Yves was the chairman of the town for over 20 years. The growth and development of the Community was very important to him.

Yves loved all sports, but most of all, hockey was his passion. He was a dedicated La Broquerie HABS fan and supported all the teams from Minor Hockey to the Seniors. Baseball was also a game he truly loved. In the 1980’s, Yves and Denise would drive to Florida to watch the spring training of the Montreal Expos.  At home, he would sit in the bleachers and cheer on our local baseball teams at all levels.

Golf and travelling were other interests he shared with his family. He was adventurous and tried anything once. The life lessons he exemplified were hard work, hard play and the value of financial stability.

Yves was a very proud man. He was especially proud to see his children and grandchildren succeed in whatever they attempted. He was a very sensitive and giving man. A devoted husband, father, grandfather and great grandfather. He will be missed.

Cremation has taken place and a private family “Celebration of Life” will take place at a later date.

In lieu of flowers, donations in memory of Yves Lafrenière may be made to the Heart and Stroke Foundation and the Canadian Diabetes Association.

Special thanks to the doctors and nurses that provided comfort care for Dad at the Bethesda Hospital.