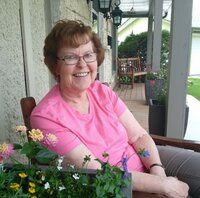 It is with deep sadness we announce the passing of Marlyn, a beloved wife, mother and grandmother.

Left to cherish her memory are her husband Harold, children Sherry (John) and Glenn (Tiffany), and her granddaughters Ashley (Matthew) and Taylor (Travis). She is also survived by two sisters (Anne, Cathy) and three brothers (Jack, Abe, Harry). She will also be lovingly remembered by her nieces, nephews and numerous friends that were thought of as family.

Marlyn was predeceased by her parents, Tina and Abe Fehr, her in-laws, Maria and Abe Lepp, her sister-in-law, Hilda Lepp, her brother-in-law, Henry Martens, her nephew, Kerry Lepp, and her niece, Jacqueline Cannizzaro.

Marlyn was born in Carman, Manitoba to Tina and Abe Fehr. She lived on the family farm in the Wingham area, near Elm Creek, for most of her childhood where she also attended school. When Marlyn was in Grade 5 the family moved to Winnipeg but only for one year as they quickly realized home was on the farm. At the age of 16 Marlyn moved in with her grandma in Morden to work at a sewing factory. Continuing with her love of sewing, she moved to Winnipeg to live with her sister Anne where she got a job in another sewing factory.

Lucky for Marlyn, Anne got married in 1964 because it was there that she met Harold as they were both in the wedding party. Now needing another roommate, Marlyn’s sister Cathy moved in with her. Looking out for her little sister, Marlyn got Cathy a job at the same sewing factory.

Marlyn and Harold were married October 2, 1965. They lived on a farm in the Steinbach area, one year later moving to Winnipeg.

In October of 1967 they began their family and Sherry was born on their second wedding anniversary. Each year Sherry reminded them how lucky they were to have her instead of the Chinese food they had planned.

Two years later, on March 2, 1969, they welcomed their son, Glenn. Glenn kept Marlyn on her toes his entire life as his love for speed when it came to snowmobiling or motorcycles constantly had her worried about him.

Soon after the kids were born, they moved the family out to Oak Bluff where they lived until 1985.

They first moved to a property 2 miles out of Oak Bluff, then in 1977 they built their own home in a new development in town. They lived there for 4 years and got the itch to build again, so in 1981 they finished and moved into their second new home. In those 8 years many great memories were made as her brothers, Jack and Abe, both built houses in the development. Lucky for the two boys their youngest brother, Harry, didn’t build too as Marlyn has always believed he could do no wrong.

In 1985 the family moved back to Winnipeg to St. Vital where they lived to this day.

In 1995 Ashley was born and Marlyn took on her proudest role in life as Grandma.

Two years later in the summer of 1997 Marlyn was diagnosed with acute myeloid leukemia. She battled for 6 months, ending with a bone marrow transplant and she was once again ready to take on life again.

Taylor was born in 1999, and Marlyn was overjoyed to have another granddaughter to spoil, teach and love.

In 2010, Marlyn had what was going to be the first of many strokes. Although each one presented her with a new set of challenges, her drive, determination and pure stubbornness kept her going.

Anyone that knows Marlyn knows her for her love of cooking and baking. She showed her love through her food and could be found many evenings driving around with Harold delivering the latest goods she had made to her family. It would be safe to say that almost everyone in her life has tasted her famous potato salad (which she would never give out the recipe for), her cinnamon buns, jams, soups, bread, or various other creations… the list could go on and on. Never ask for a recipe though, as Marlyn’s reply would be “oh a little bit of this and a little bit of that”.

Marlyn was a skilled seamstress, sewing everything from baby clothes for the kids, ringette uniforms for the Oak Bluff team to bridesmaid dresses. Marlyn was disappointed when the kids didn’t want to wear homemade clothes anymore.

Marlyn loved dogs. The family had several over the years growing up, but it was her final dog, Miko, that held the most special place in her heart. When Miko’s time had come, she stepped up in her role as “grandma” to Rudy and Julie next door at Jayne’s place.

Marlyn was a social butterfly, she always wanted to be out and about or surrounded by people in her home. Marlyn had many special friends, who know who they are, and she always cherished the time spent with them. One in particular, started out as a new neighbour 15 years ago, but turned into a friendship neither could have foreseen. Marlyn and Jayne spent many hours together having morning coffee on the front step, walking the dogs and causing trouble.

Marlyn’s love for her kids and grandkids could be recognized by anyone who would listen to her. She passed on her love of sewing and baking to her granddaughters. They have big shoes to fill but she has prepared them well. Her love for the girls continued on the softball diamonds and volleyball courts, with Marlyn and Harold always there to cheer them on. Her relationship with her son-in-law, John, would make anyone laugh as the two of them could go at it with each other for hours. They had a common love of Sudokus, and she would drive John crazy at their weekly puzzle night as they were both sure their way was the only right way to do a puzzle. Sherry and Glenn could always make Marlyn laugh when they went back and forth with each other arguing who was the favored child.  Marlyn was overjoyed to celebrate with family and friends at Ashley and Matthew’s wedding just 6 weeks ago.

Marlyn’s spunk, quick wit, stubbornness and sense of humour will be missed by many, especially her nieces and nephews.

According to her wishes, cremation has taken place.

There will be a Celebration of Life on Wednesday, September 7, 2022, at 1:00 p.m. at the Winnipeg Evangelical Free Church, 500 Lagimodiere Blvd, Winnipeg, MB. To join the family via livestream please click HERE shortly before the time of the service.

Those who wish to honour Marlyn may donate to Heart and Stroke Foundation of Canada or Canadian Cancer Society.