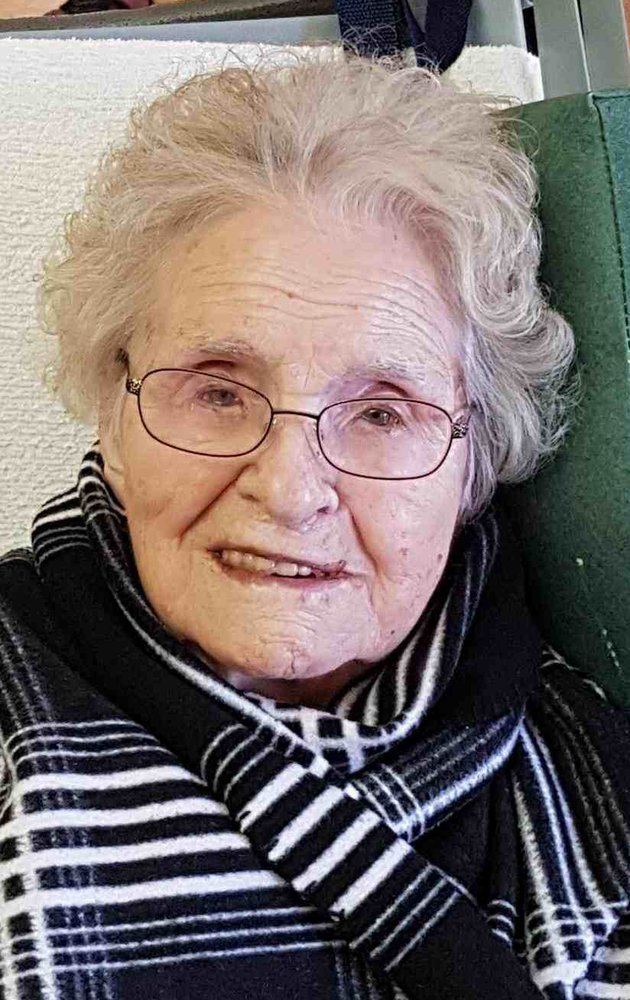 Adela Freund Schmidtke was born at home in Friedensfeld on May 20, 1917. She died on December 4, 2019 in Bethesda Place. She was 102. Her son Glen and granddaughter Barilee were at her side. She was the 5th of 10 surviving children born to Adolf and Juliana Freund.

In her early years she was called Dela, later she preferred Adele, but most of all, she loved being called Mom, Grandma or Auntie Dela. She was mother to two sons: Elvin (Mabel) and Glen (Carol). She was grandmother to three grandchildren: Karla, Barilee and Erich. She was great- grandma to Zander, Mira, Dax, Emerson and Ava. She regretted that her adult children, and their offspring all lived far away from Steinbach. Until 2013, she made yearly visits, by bus or plane, to see both sons and their families.

Dela was predeceased by her parents, all of her siblings, and her daughter-in-law Debra.

She was known by family and friends for her homemaking skills: sewing, baking, cooking, gardening and preserving. She claimed her mother was even better in all these tasks than she was. Those of us who enjoyed her food, toured her garden, or received one of her quilts doubt this could have been the case.

Dela would consider her best decision to be marrying Rudolf Schmitke in 1938. They were dedicated to each other until Rudolf’s sudden death in 1978. This rocked Della’s world. The hard, early years on their farm were nothing compared to living without the man she dearly loved. But Dela persevered and flourished. She maintained her home to a high standard, travelled and managed her finances. At the age of 93, Dela sold her home to move into Fernwood. She enjoyed the companionship, but missed her garden. At the age of 95 she experienced a fall that left her unable to live unassisted. When she moved to Bethesda Place, this ultimate hostess had two regrets: that she could not cook for visitors and the size of her room prevented overnight guests! However, she always professed, “They treat me so good here!”

In the ’70’s, Rudolf and Dela travelled to Australia and other South Pacific destinations. They also travelled to The Holy Land. They had plans for a trip to Germany, but Dela made that journey with friends instead after Rudolf’s death.

Dela was a woman of faith. She lived and modelled it daily. She enjoyed daily devotions and prayer, and attended weekly bible studies at St Paul’s Lutheran Church in Steinbach. When she was unable to attend on her own, her nephew Elmer Freund took her to Bible studies, and Albert and Marieanne Schwarz drove her to Sunday services.

The family wishes to acknowledge and express publicly, our gratitude for all the ways Dela was loved, assisted and supported by dear friend Susan Snead, nephew Gordon Pachal (Lorraine), niece Janice Beckman (Rodney), and nephew Lloyd Pachal (Cathy). We are also grateful for the many visits, communion and prayers by Pastor Terry Gudmundson. The staff of Bethesda Place were perceptive from the beginning, to Della’s individual needs for company and desire to stay up late. The staff kept her sons informed of changes in her health and needs. Della felt comfortable in your care. Thanks to everyone.

The funeral for Adele Schmitke will be held on Monday December 9th, at 2:00 PM, at St Paul’s Lutheran Church in Steinbach. Interment will follow immediately at St Paul’s Cemetery on #12 Highway.

In lieu of flowers, donations may be made to St Paul’s Lutheran Church, 465 Henry Street, Steinbach, MB.