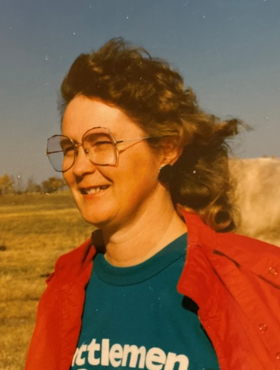 In the early morning of Thursday, February 13, 2020, at home with family around her, Carol Anne Zarn passed away; Heaven received another angel.

Carol was born and raised in Melita, MB, a small town in South Western Manitoba.  She was the oldest of three children born to Richard and Dorothy Williams.  She met the love of her life in her high school years; a farm boy from Reston named Robert Zarn.  She started her career working as a teller at the Royal Bank in Winnipeg, located at the corner of Corydon & Renfrew (coincidently where her daughter’s accounting firm is located today).  In 1967, she left Royal Bank of Canada to work at the Bank of Montreal in Reston.  Bob & Carol were married on November 18, 1967 and made their home on a cattle farm North of Sinclair, MB.  It was here that they raised 4 children, 3 sons and a daughter until moving to another small town farm in Piney, Manitoba in November 1989.

Carol worked as a fire spotter in the RM of Piney, climbing the towers located at Menisino and Badger; she was also a teller at the Sprague Community Credit Union for many years before being diagnosed with dermatomyositis in 1995, which forced her to quit working.  She was later diagnosed with Non-Hodgkin’s Lymphoma in 1997 but beat both diseases and had been in remission for roughly 20 years before being diagnosed in early 2019 with stage 4 tongue cancer.

Carol loved to tend her garden, was an avid golfer, bowler, curler and card player.  No matter what her health, she never missed walking in the annual Terry Fox Run held in Vassar every September around her birthday.  She could always be found cheering on her children and grandchildren at any sporting event they were involved in and loved nothing more than being close to all of them.

Share Your Memory of
Carol
Upload Your Memory View All Memories
Be the first to upload a memory!