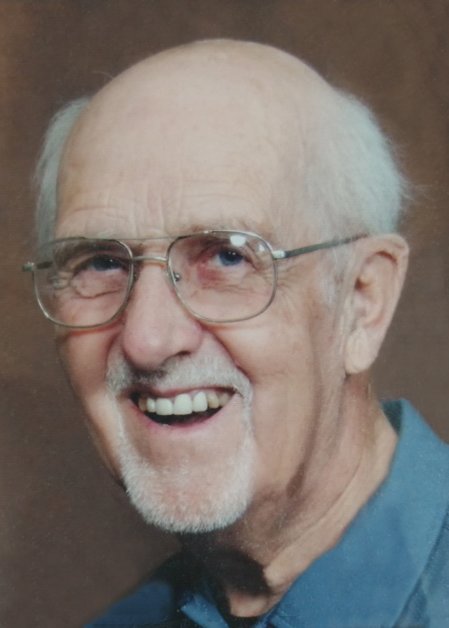 With sad hearts we announce the passing of Jake Goertzen (92) on June 18, 2020.  We mourn the loss of the beloved husband to Adina and dear father to Judi (Gerald Froese), Kathleen (Bob Boschman), Joni (Ernie Block), Gloria (Ellery Erb), Cheryl (Rod Staff, dec. Mar. 2001), Barry (Brenda), and Gerry (Dayle).  He will also be deeply missed by many grandchildren and great grandchildren whom he treasured.

He is also mourned by his siblings and extended family as well as many friends.  He has reunited with many friends and family already in Heaven, including his parents, 3 brothers, 4 sisters, and one son-in-law.

Due to restrictions caused by the Covid 19 virus, a celebration of Jake’s life is being planned for a future date, possibly towards the end of summer.

Jake was born on February 26, 1928, the eldest son of 12 children, to Jacob and Helen Goertzen. He grew up and worked hard on their farm.  As a young man, he attended and graduated from Prairie Bible Institute, and on June 23, 1951, married his childhood sweetheart, Adina Plett.  They were happily married for almost 69 years, and raised 7 children.  He was passionate about his family, and any time together was precious.  He especially found great joy in any activity that included his numerous grandchildren and great grandchildren.

His life had many accomplishments, always achieved with the highest integrity.  His first adult ministry was 2 years as a Pastor in Saskatchewan.  The next 15 years were spent planting 2 churches in Manitoba; at Hodgson and Dallas, as well as building and running the Fisher Bay Bible Camp on Lake Winnipeg.

He then moved to Saskatoon and took over travel and accounting responsibilities for the Canadian Office of the Gospel Missionary Union (now Avant Ministries). Moving back to Winnipeg, he continued his work for the Mission Office and after his initial retirement, took on District Superintendency for the Evangelical Free Church.

Jake loved his jobs and took all his responsibilities as a challenge to learn and give his best.  He was also gifted in other ways.  He was always making something new, building things in his workshop like making wooden clocks and side tables for his family, restoring an old truck, and numerous other creative projects.

He had a big, loving heart, and will be greatly missed by his family who knew him well and loved him, and by all his friends and acquaintances who admired and respected him.

If you would like to make a donation in Jake’s memory, please consider giving to the “Legacy Fund” of the Fisher Bay Bible Camp, 903-325 6th Street, Winkler, MB.  R6W 1G5