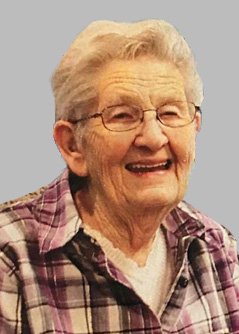 At 6:11 p.m. on Wednesday, July 29, 2020, Susanna Driedger, (nee Friesen) with her daughters Judi and Helen and son-in-law Don at her side, traded her earthly body for a heavenly one as she met her Lord and Saviour in that eternal home prepared for her.

Susanna was born in the little village of Blumenthal, Manitoba to Bernhard and Anna Friesen (nee Stoesz) on January 18, 1933. Her friends called her Susan; we called her Mom.

Mom loved going to school and was a keen learner.  Somewhere in her early teens she acquired a guitar and set about learning to play.  Grandma Stoesz who was living with them at the time is known to have encouraged the lessons to take place behind the manure pile.  However, not long after, this same Grandma would sometimes beg her to “play me a song before I lay down for a nap”.  In her late teens, she met Frank Driedger and their dates often consisted of making music while sitting on the kitchen steps; Susan on the guitar and Frank on the harmonica.  Somewhere, Mom has scribblers full of song lyrics written out in her meticulous handwriting.  Recorded alongside them were poems she wrote; mostly about her faith and her Saviour.

Mom was baptized on the confession of her faith in 1952 and on July 6 of the same year, she married Frank Driedger.

In November of 1953, Frank and Susan along with their very young daughter Eva, left Mexico and moved to Gnadenthal, Manitoba where they began their farming career.

In Spring of 1965, they moved their family which now numbered six, to MacGregor, MB where them farmed until 1982. While living there, two more daughters were born to them.

With eight children to raise on a busy farm, there was time for little else than work.  A frequent phrase heard to escape Mom’s lips when the children became too rambunctious was “Oba majalles or “Oba junges”.  Mom’s favorite things about farm life were gardening and turning the cucumbers into pickles.  “Fun” things also included picking raspberries, choke cherries and saskatoons in the bushes surrounding their farm.  Winter evenings or Sunday afternoon were often spent playing games like Dutch Blitz, Monopoly or scrabble with her children.  Church and Bible Study were also an important part of life.

An especially sad and trying time for the family during this time was the untimely accidental death of son Frank on October 31, 1974.

Life on the farm came to a close in 1982 when the move was made to Steinbach.  At this time Mom and Dad became passionately involved in Prison Ministry.  Mom also enjoyed her volunteer work at MCC.

In 2007, Mom and Dad retired in Mitchell, MB where they enjoyed a slower pace for the next ten years.  In 2009, Mom again experienced the sadness of having a child predecease her.  Son, Menno died of a heart attack at the age of 49.

In 2016, Mom and Dad settled into their condo at Bridgepark Manor.  After Dad passed in 2017, Mom continued to live there for about a year.  In December of 2018, she was moved to Bethesda Hospital where she waited for a room at the care home.  While there, she continued her support of MCC by crocheting many a dish cloth.  Idle hands were not her thing.

Many, many more things could be said about our Mother.  She was a kind woman and loved deeply and was always empathetic toward those who were hurting.  Her Bible and Daily Bread were always within reach. She loved to make cookies and always had an abundance to send home after family gatherings; especially to those who were missing from that gathering.  It was her way of saying “your presence was missed” and “I love you”.

We will miss you, Mom.  Until we meet again.

The family would like to extend a huge thank you to the health care staff at Bethesda Place.

A private family funeral by invitation only will be held on Sunday, August 2, 2020 at 2:00 p.m. at Birchwood Funeral Chapel, Steinbach, MB.

To join the family via livestream please log on to the following link 15 minutes prior to the service.

In lieu of flowers, donations in honour of Susan may be made to a charity of one’s choice.