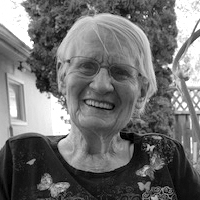 Dorothy was born on the family farm in the Heabert School District near Lowe Farm, Manitoba.

She attended Heabert School to grade 8 and attended the sewing school in Steinbach where she learned sewing skills that she used until she was almost 90. As a teenager she was baptized in the Bergthaler Church.

In August 1947, Dorothy married David Wiebe in a tent on her father's farm and a week later accompanied him to his first teaching job at Eigenhof near Altona. As Dad taught in various country schools, Mom supported him behind the scenes by serving with industry and creativity, both at home and in the community. All her children were born in the Altona hospital, except for Howard, who was born in Winkler. Sadly, Howard died at the age of 8. Tragedy happened again when her husband died leaving her a widow at 52, just after all her children had left home. However, Mom rallied and at age 57, after volunteering there, she obtained her first wage job as a housekeeper at Eden Mental Health Centre, a job she held until she retired.

After retirement, she moved to Winnipeg, where she volunteered in the MCC Thrift Store, and upon learning of the MCC gift bag program, she saw an opportunity to fill a need and for many years sewed 1000 drawstring bags a year for MCC relief programs.  As children we would watch Mom study an item of clothing in the Eaton's catalogue and then create a similar item on her Singer. Besides sewing, Mom exercised her enterprising spirit with gardening, raising roosters in a joint project with her father, and selling vitamins. She was an ambassador for aloe vera, the healing plant.

Dorothy loved hosting her grandchildren, reading, and listening to the radio and during her Winnipeg years was a loyal member of Home Street Mennonite Church.

Dorothy's family thanks the management and staff of Bethania Personal Care Home for their compassionate care of Dorothy. Special thanks to the nurses in the Covid Unit, especially Victor, Cherise, and Earl.

A come and go viewing for 5 people at time will be held on Sunday, January 17, 2021 from 1:00 - 4:00 p.m., please remain in your vehicle until directed inside. Face masks and social distancing measures will be in effect.

A private family interment will be held at a later date.