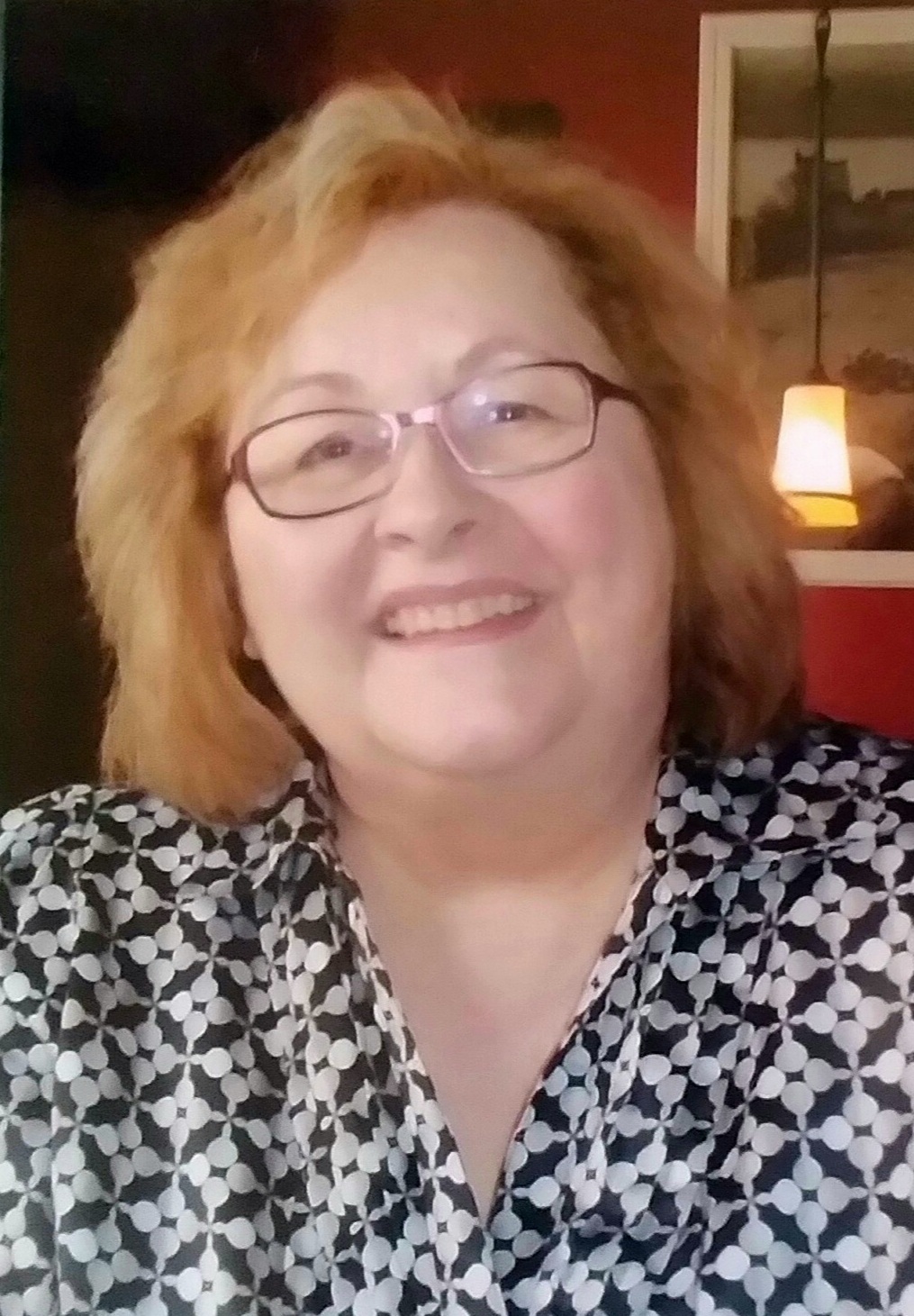 Marilyn Hawrysh, age 74, of Steinbach, passed away peacefully on January 27, 2021, at River Park Gardens personal care home.  She is survived by her beloved husband Ernie and their daughters Leanne and Lynette, son-in-law Ryan, grandchildren Katrina and Dean, and sister Bernice.  She was predeceased by her parents, William and Stella Brodoway of Vita, Manitoba.

Marilyn was born on February 15, 1946, in Vita.  Her mother and father had a small farm a few miles southwest of Vita.  Marilyn had many good memories of life on the farm, from milking cows, looking after the chickens and picking morel mushrooms in the spring.  Marilyn especially liked harvest season when everyone pitched in to get the threshing and haying done.  She would run food and water out to her father while he was working in the fields.  Other sources of excitement living in the country included sightings of wildlife, such as reports of bears in the neighbourhood and the time Marilyn encountered a cougar on her way home.

The Gransch and Popko families often came to Vita for visits, bringing treats from the big city.  Marilyn enjoyed joking with her cousins and being teased by Leonard and Alan.  She acquired the nickname “Mickey” from one of her uncles, a nickname she cherished for many years.

After graduating from high school, Marilyn moved to Winnipeg in 1964 and worked for the RCMP D Division for nine years, making many friends there.

Marilyn had a close relationship with her parents and sister, coming home on weekends to visit with her family.  Those weekend visits included watching late-night scary movies with her sister, like Chiller Thriller and then being too scared to venture outside at night.  In later years, she and her daughters continued with this tradition, watching many spooky episodes of Unsolved Mysteries, Dateline and 48 Hours Mystery.

In the spring of 1968, Marilyn was visiting and went into town with her sister to get a Coke.  Ernie happened to be working in Vita and saw Marilyn at the grocery store.  After asking the locals who she was, Ernie later called Marilyn and asked her to go on a date.  They were married the following year, on October 25, 1969.  Fun fact – Ernie had to pass a background check by the RCMP to get approval to marry Marilyn.  They lived in Winnipeg for several years before moving to Steinbach in 1975.  Marilyn worked in Steinbach at the Met and the downtown grocery store.

In 1974, their daughter Leanne was born, followed by Lynette in 1977.  Her daughters have fond memories of the special little things that Marilyn used to do for them.  In winter, she would warm their socks on the heat register before waking them up to go to school.  Birthdays were always an occasion, with specially decorated cakes and themed parties.  At Christmas, the house was decorated beautifully, and she spent hours baking special treats for everyone to enjoy.

Marilyn had temporarily left the workplace to focus on raising her daughters.  In 1986, she returned to work, this time at Bethesda Hospital, a short commute from her home on Ash Avenue.  Marilyn had always had an interest in the medical profession and enjoyed her job at Bethesda Hospital.  She made several close friends and always looked forward to getting together with the gals.

Marilyn enjoyed gardening; their home in Steinbach had beautiful garden beds filled with flowers.  Every Mother’s Day she looked forward to touring the greenhouses in Steinbach to get the best flowers.  Often, we would have to stop off at the house to unload before moving onto the next greenhouse.

Marilyn and family enjoyed shopping; those early years with the kids were marked with trips to Winnipeg nearly every weekend to check out not just one mall, but several.  In the 80’s, when the Cabbage Patch Kids craze was in full swing, Marilyn was at Eaton’s to get those dolls for her girls.  Shopping trips to the States were also a fun occasion for the family; day trips to Grand Forks or long weekend stays in Fargo, checking out the stores and dining out together.

Marilyn and Ernie did a lot of travelling together, including a camping trip out West.  This first camping trip together had some hiccups, as fear of the local bears drove them to spend a few nights in the car instead of the tent.  Other memorable camping trips included going across the border to Thief River Falls joint-family camping trips to Falcon Lake.

Over the years, more trips across Canada were taken; a memorable trip to B.C. for Expo 86 and trips to visit family and friends in Ontario.  Road trips to the States covered the Midwest and some of the southern states.  The 80’s also included a trip to Wisconsin Dells and the famous waterparks.  Later years brought trips to Florida with the family and grandkids to experience Disney World.

Marilyn enjoyed country music; trips to Winnipeg and Vita were accompanied by a soundtrack of Kenny Rogers, Don Williams, Crystal Gayle, Ann Murray, and Charley Pride.  Marilyn and Ernie attended many Charley Pride concerts and even got to meet him.

Marilyn was a kind, generous woman with a big heart and had the sweetest smile. She was a great listener and a loyal friend. When her father William was no longer able to live on his own, Marilyn and Ernie welcomed him into their home and cared for him.

Mom loved to entertain and try new recipes, she clipped many recipes from magazines and newspapers.  Joining the Hawrysh clan meant there were many occasions to try out and share recipes with her new sisters-in-law; many of those recipes have been passed down to the next generation.

Being Ukrainian, we must, of course, talk about food.  Perogies of every variety graced our table; at Christmas, there were cheddar and potato, sauerkraut, and prune perogies.  Late summertime meant plum perogies; happy days had arrived when the prune plums were spotted in the grocery store.  A special treat for Leanne were the cottage cheese perogies that Marilyn made when she came home to visit.

Cabbage rolls, beet leaf buns and nalysnyky were also in regular rotation.  When one thinks about how many cabbage rolls and perogies were made over the years, the stats are likely in the thousands.  Marilyn, being a good cook, was sometimes reluctant to share all her secrets.  She’d say “I just follow the recipe”, but when she was pressed for details, her daughters and sister found out that it was actually more like “I just follow the recipe, but…I don’t add that, or I add a bit more/less of this.”  The secret of her perogy dough was not revealed until her daughters came of age and Marilyn was willing to pass down the title of Perogy Queen to Lynette.

When her future son-in-law Ryan came to meet the family in 2006, Marilyn wanted to make him feel welcome and pulled out all the stops – delicious food, fancy tablecloth and dishes.  However, an unfortunate issue with the contents of a pepper shaker and some extra-aged pepperoni contrived to cause Marilyn some embarrassment but the shared laughter broke the ice.

Ryan was also introduced to Marilyn’s exacting standards and attention to detail, especially when it came to serving dainties. Ladies of the Hawrysh family can attest to this; per Marilyn, dainties must be cut to measure exactly 1 square inch.  A ruler or measuring tape was strongly recommended.  Ryan was unaware of this rule and innocently tried to help by cutting the pan of coconut squares - without measuring - much to Marilyn’s horror.  Those of us who witnessed that interaction still laugh about it to this day.  To both Marilyn and Ryan’s credit, they handled that minor misunderstanding with good grace.

In 2010, Marilyn and Ernie’s first grandchild was born – Katrina Rose.  She was followed by Dean Michael in 2013.  Marilyn relished the role of “Ba-Ba”, enjoying nothing better than spending time with her grandchildren.  She and Ernie would come into the city once a week to pick the kids up from daycare and spend afternoons with them.  The kids soon learned that Ba-Ba always had treats in her purse for them. It made her day seeing the grandkids’ excitement as they found little treasures in Ba-Ba’s purse.

When Marilyn’s health declined to the point where she was no longer able to go the stores, she still found a way to get her Christmas shopping done, as she demonstrated this past Christmas. By looking through the flyers, she picked out gifts for the entire family and dispatched her personal shoppers to collect her items.  Ernie, her daughters, and sister got many calls that started with “I have a list, I need you to go to shopping”.

Marilyn was always interested in what her family and friends were doing, be it painting the house, planting a garden, home reno projects and work.  She would clip articles and recipes from the newspaper related to their interests and pass them along.  Marilyn was the family’s news source; she’d read the paper every day and was the first one spot an article with a picture of Ryan in the Winnipeg Free Press, much to everyone else’s surprise.

Being separated from her family was hard for Marilyn, especially after the COVID restrictions were implemented.  She was determined however, and figured out how to stay connected, teaching herself how to use Duo and surprising her daughter Lynette with that first video call.  Many video calls followed that first one and were a lifeline for all of us.

Marilyn and Ernie had a special bond.  Despite being miles apart the past few years, they spoke daily, and Marilyn always looked forward to talking to Ernie.  Ernie took incredible care of Marilyn, taking her to appointments to ensure she always had the best care.

A livestreamed memorial service will be held on Wednesday, February 3, 2021, at 2:00 p.m. at Birchwood Funeral Chapel, Steinbach, MB. To join the service please visit the following link shortly before the service.

Special thanks to Dr. Grobler for the many years he managed Marilyn’s health care needs.  The family would also like to thank Victoria and all the staff (nurses, aides, maintenance, and housekeeping) at River Park Gardens for their excellent care of Marilyn during her stay there, treating her with respect and dignity.  Marilyn and her family especially appreciated all the little things they did for her, such as putting her drink in the freezer before supper so that it would be ice-cold (Bobby), chatting with her and making her feel welcome.