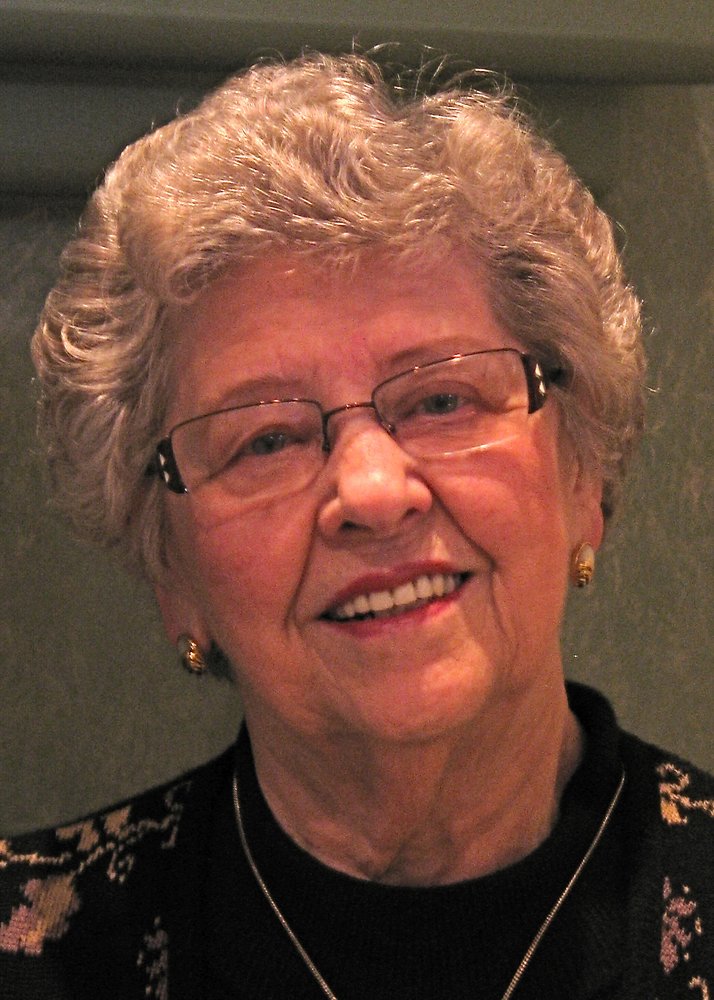 Ruth Sapinsky (nee Redekop) passed away peacefully in Steinbach Manitoba on Thursday,  March 4, 2021 at the age of 97.Ruth Louise Redekop was born November 2, 1923 in Herbert, Saskatchewan, the eldest of 5 children born to Benjamin and Anna Redekop. Her father was a businessman (John Deere Dealer) and farmer, and her mother was a homemaker.

Ruth dropped out of High School just before she was to go into grade 11 to look after her siblings to allow her parents to visit her grandparents in California. She would then spend the rest of the year in the Herbert Bible School before completing her high school education and graduating in 1942. Subsequent to graduation from High School she studied to be a Permit teacher and after six weeks in Normal School In Moose Jaw she was sent out as a teacher to Fossmore School in Vesper south of Swift Current Saskatchewan.

On April 4, 1945, Ruth was married in Herbert to Hans J Sapinsky. They had a wonderful, loving relationship for 57 years. Together they had 3 children, Richard, Gerald and Julia. She and Hans loved to travel and took their family to British Columbia multiple times to visit relatives. They took a trip to South America to visit her sister Helen and family in 1979 and another trip to Europe with her sister Lois and her husband John Dyck. This adventuresome spirit saw them travelling up the Dempster Highway with Julie and Ken to Inuvik. Visiting with family was very important to them as they made numerous trips to Manitoba, Alberta and British Columbia to spend time with their children and grandchildren.

In 1955 the Herbert School Board was having difficulty in filling the position of teacher in the Rockside School nine miles northwest of Herbert and Ruth was convinced to take on this challenge. Although there was a teacherage at the school the decision was taken to maintain the family residence in Herbert so that her mother could look after Gerald and Julia while Richard attended school in Rockside. This meant driving back and forth each school day.  Ruth being a cautious driver, drove very slowly on the extreme right side of the road. One morning her caution caused the loose gravel on the road to capture the front wheel of the car which resulted in a slow rollover into the deep ditch. The car, a 1952 Ford, landed on the roof but the maneuver was performed so gently that none of the eggs in the back seat were broken and even the bottle of milk was not spilled. 1955 was the year of the big blizzard. The school children, all 13 of them, were marooned with Ruth and Hans and very few provisions. All were moved to the teacherage and the horse blankets were retrieved from the barn. Ruth and Hans played games with the children till the wee hours of the morning. After 3 days the parents began showing up on bobsleds and sleighs bearing loads of food for all.

In 1959 Ruth, with the family, moved to Regina for a year to upgrade her teaching credentials at the Saskatchewan Teacher’s College. Subsequent to this education upgrade, the family returned to Herbert where Ruth took a teaching position in the elementary school. She taught there till her retirement in 1983.

In 1986, after the passing of Dorothy Martens (a close neighbour), Ruth and Hans assisted Kent with the raising of his young family of five for several years.  The children still refer to Ruth as “Mother Ruth”.

In 2011, Ruth moved from Herbert to Bridgepark Manor in Steinbach Manitoba and shortly after she moved there, her brother Bill and his wife Loreen joined her in the same apartment building. Ruth and Bill remained very close and visited each other daily even through the Covid-19 lockdown.

Throughout her life, Ruth devoted much of her time to the community and to the church. Ruth spent years teaching Sunday School, singing in the church choir and being a leader in Pioneer Girls. She and Hans frequently sang duets together in church and at other functions. In the community she held numerous positions on various committees including the New Horizons Association and the Heritage Committee. Her work with New Horizons helped to create a meeting place for the seniors of the community and her work with the Heritage Committee involved the Herbert Museum and the railway exhibit.

In 1985, Ruth was commissioned with two co-authors, June Buhr and Bettie Hall, to compile and author a book detailing the history of the Herbert community. This resulted in the 1987 publication of a 1006-page book entitled “Bittersweet Years, The Herbert Story”.

Ruth is cherished and mourned by her sons Richard (Rowenna) and Gerald (Georgia) and son-in-law- Kenneth Browne (Brenda) and by seven grandchildren and five great-grandchildren. She will also be missed tremendously by her brother Bill Redekop, sisters Lois Dyck and Helen Dueck, sisters-in-law Chris Redekop, Elizabeth Knecht plus many nieces and nephews.

Ruth was pre-deceased by her husband Hans, daughter Julia, and brother Walter.

The family wishes to thank the staff and residents at the Bridgepark Manor and the nursing staff at Steinbach Bethesda Regional Health Centre for their compassionate and excellent care.

In lieu of flowers, if friends so desire, donations in memory of Ruth may be made to Mennonite Central Committee or the Gideons.