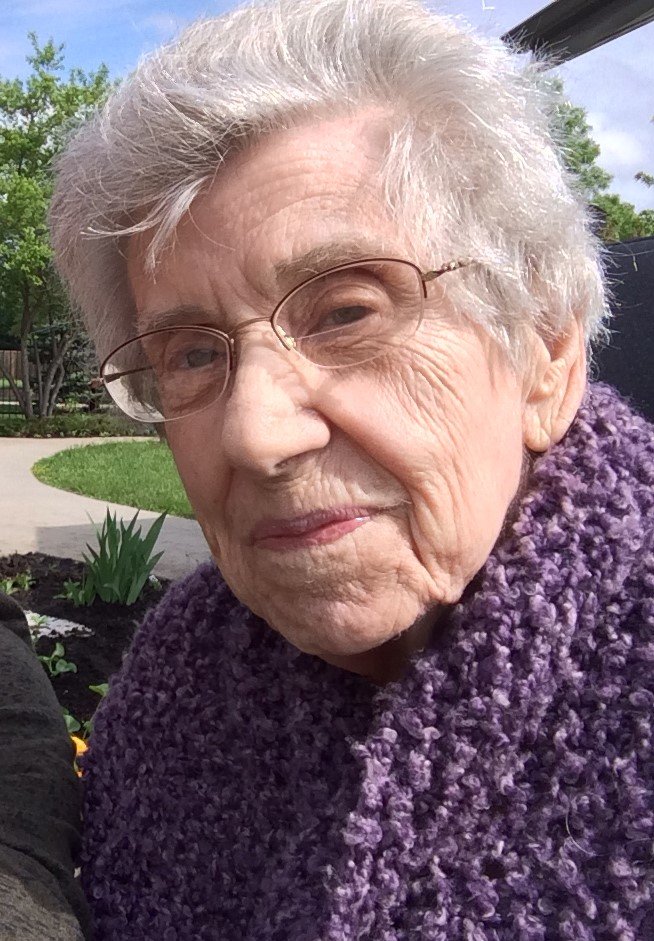 Jessie is survived by five children: Eric (Joyce), Victor (Sylvia), Clara Sawatzky (Ray), Edwin (Valrea), and Harold (Juanita Doerksen); 29 grandchildren and 31 great-grandchildren. She was predeceased by her husband Heinz (Henry) in 2016; by one daughter-in-law, Rose Peters; by two granddaughters, Leanne Peters and Faye Peters; by her parents Johann and Margarete Peters; and by her sisters, Margarete Hildebrand (Franz), Sara Peters, and Marie (Mary) Enns.

Jessie was born on October 18, 1924 in Gnadenthal, Molotschna, South Russia and immigrated to Canada with her family in 1925 and settled a few years later in Grunthal, Manitoba.

Jessie went to public school in Grunthal and finished grades 11 and 12 at the MCI in Gretna, graduating at age 17. Her hours of religious instruction in classroom and choir laid the foundation for her faith. She loved working with numbers and how the interpretation of poetry stimulated the imagination and felt that the memorization of German literature greatly enriched her life. It was here that she learned her traits of patience and service and her love for classical music.

After her MCI graduation, she took a 6-week teaching permit course and in the fall of 1942 started teaching at the Maitland school (Plumas). The next year, she went to Normal School in Winnipeg to obtain her teacher’s certificate. After Normal School, she moved to New Bothwell to teach Grades 1-3. Hardships there taught her that, “…you can do some planning for your life ahead, but you have to learn to be very adaptable to what the future holds for you.” The next year, Jessie moved to Prefontaine where she taught for six years. In those days teaching also included arising early to walk to school through winter snow and spring mud to start the fire and ending the day by hosing down and shoveling out the muddy floors.  In 1950 she began teaching in Grunthal and lived at home. Her hundreds of students were blessed by her intelligent and patient schooling.

While teaching in Grunthal, Jessie was courted by a widower with four young children, a Heinz (Henry) Peters who was farming in Chortitz (Randolph). They were married in 1960 and Jessie gave up her teaching career for a life of farm homemaker and mother to Eric (15), Vic (12), Clara (9), Ed (5). Harold was born in 1961. Mom faithfully tutored her children’s music practices and attended many music festival competitions. Even as the farm expanded in size and children married, Mom and Dad still found time for vacations to parks and extended family across Canada and the USA. They lived on the farm until 1976 whereafter they semi-retired to a home on Hwy 52.

Mom loved to read and would be seen doing so whenever time permitted; there was always a large stack of magazines and books in the home. Her love of classical music meant the radio was always on and tuned to CHSM’s classical music programs. She taught Sunday School throughout her life and for many years led the Ladies Mission and Fellowship group.

The 1980s and 1990s gave Mom the opportunity to engage in many enjoyable activities. She taught English as Second Language classes and relished being back in a teacher’s role. Mom and Dad loved interacting with their grandchildren and Oma was very involved in their home and school lives. Their church-sponsored refugee family became a part of their extended family and they supported and visited with them for decades. Travelling was a favorite pastime and frequent winter trips to Palm Springs, Mexico, and Hawaii were anticipated and enjoyed. Every year, numerous daytrips and multi-day excursions around Manitoba were undertaken; Mom enjoyed birdwatching so frequent stops were made at bird sanctuaries.

In 1999, they moved to a condo in Steinbach and remained active in church, family, farm life, and traveling. A highpoint for Mom was touring in 2000 with the Mennonite Heritage Cruise to see her homeland in the Ukraine. In her 80s, Mom’s life began to be affected by dementia. Dad took care of her for years but as he also aged, they moved into assisted living at Bridgepark Manor in 2011. Increased dementia precipitated her move into Bethesda Place in 2014. Her life slowed down, but she enjoyed receiving and listening to visitors, music programs, getting outside, and while her mind still allowed, reading, puzzles, and Scrabble. Henry joined her at Bethesda Place in 2015 and died in 2016. The family is deeply appreciative for Mom’s caregivers in the last years of her life at Bethesda Place.

Mom had a selfless servant’s heart and never complained about her work or duties. She lived her life to be dutiful, diligent, trustworthy, modest, and always grateful for what she had. She always talked about loving others, and faith and church were the foundation of her life.

Mom’s scripture choice for her burial was John 1:12, “All who believe and accept him, they are children of God.”

If friends so desire, in lieu of flowers, donations in memory of Jessie may be made to Bethesda Foundation.

A livestreamed private family funeral service will be on Wednesday, March 17, 2021 at 2:00 p.m. at Birchwood Funeral Chapel, Steinbach. MB, with interment to follow at the Steinbach Heritage Cemetery. To view the livestream, please visit the following link. https://www.oneroomstreaming.com/view/authorise.php?k=1615426697105124