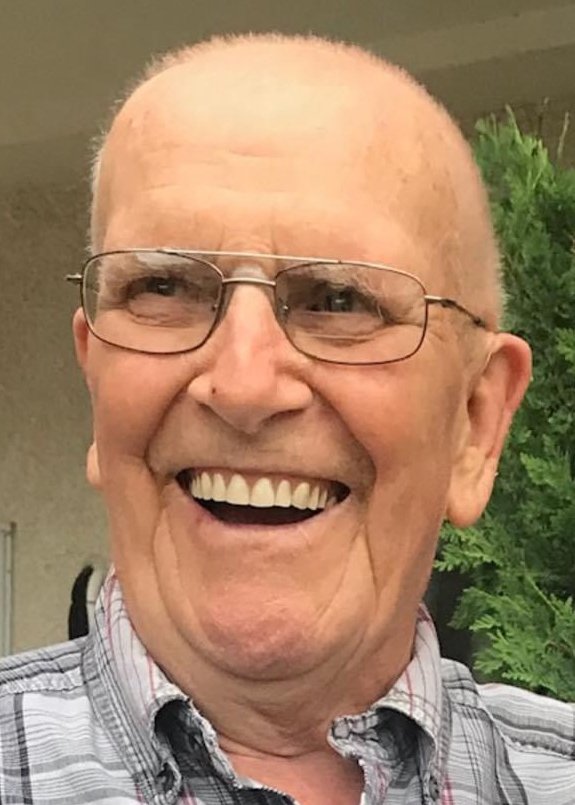 David Harms of Steinbach, Manitoba formerly of Roseisle, Manitoba passed away peacefully in the arms of his loving wife in the early hours of Friday, March 26, 2021 at Steinbach Regional Care Centre.

He was predeceased by  his first wife Katie, daughter Heidi, his parents and parents-in-law, 6 sisters and 2 brothers.

Dad was born on June 30, 1936 in the Morris Municipality in Manitoba to Peter D. and Maria (Friesen) Harms, the 11th of 12 children.  His mother’s death when he was just 12 years old influenced Dad to commit his life to the Christian life and service.  Dad started religious studies at Steinbach Bible Institute (SBI) in 1955.  It was here he took note of and fell in love with a fellow student who happened to be a talented pianist, Katie Janzen.  Dad and Mom were married on July 20, 1957 in the Morden Bergthaler Church.  Dad graduated from SBI with a Bible diploma in 1958 and began working in his brother’s business, Harms Building Mover.

The call to ministry came first to being a song leader in the Rosenort Evangelical Church where Dad had been baptized.  Years later Dad asked us to imagine a baritone/bass like himself leading singing.  Because of outreach initiatives the Rosenort EMC was involved in the leadership decided to elect more ministers to help with the work.  Dad’s name was put on the ballot which led to his election.  Dad was ordained on March 15, 1960.  By that time he and Mom had accepted an invitation to take the leadership of a church plant in Roseisle, Manitoba.  Because this was not a full-time paid position, Dad continued to work full-time, trying a number of occupations to supplement the stipend he received from the church.

Our Mom passed away after a year long illness in January of 1979.  Later that year, Dad met Fran Lepp and they were married on August 18, 1979.  A year later, Dad returned to SBI, now called Steinbach Bible College, to complete his Bachelor of Religious Studies.  Following graduation, Mom and Dad took up positions with Camp Arnes, working in Administration, Maintenance and Hosting for the next 4 years.

In 1986, Dad accepted the position of Chaplain for Resthaven Nursing Home in Steinbach, ministering there till 1999.  In retirement, Mom and Dad dedicated themselves to short term volunteer assignments with Mennonite Disaster Service, Haggai Institute, EMC Board of Missions, and Ten Thousand Villages.  In between service terms they ran a painting business which Dad described as “not their bread and butter, but providing the jam”.  The “jam” helped them travel extensively across Canada, vacationing and visiting their large and extended family.  Each of us have also been recipients of generous MDS (Mom and Dad Service) as we renovated and painted our homes.

As a family, we have been deeply blessed by our father’s love for us, his commitment to God, love of music, deep rich baritone singing voice, joy of life and booming laugh.  Even as his life ebbed in the past five weeks, we were often blessed while he sang hymns of faith along with us.  Dad, we will miss you so much but are so grateful you are now safe in the arms of Jesus.

The family would like to thank the doctors and nurses at Bethesda Regional Care Centre for their kind and tender care for Dad and for us these last weeks.  We would also like to thank Chaplain Lydia Summerville for helping us care for Dad’s spiritual needs as his life waned.

If friends so desire, donations in memory of Dave may be made to the Haven Group (www.havengroup.ca).

A private family funeral will take place on Wednesday, March 31, 2021 at 10:30 a.m. at Birchwood Funeral Chapel, Steinbach, MB., to join the family via livestream please click the following link.