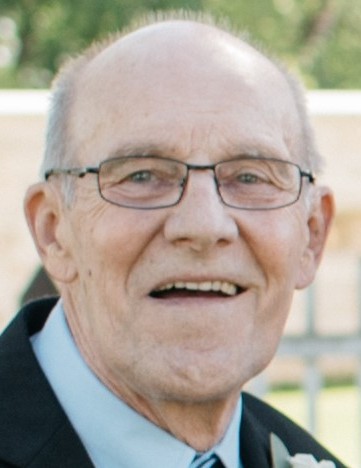 It is with sadness that we announce the passing of husband, father, grandfather and great-grandfather John Gerbrandt on April 3, 2021.

John was born in Winkler, MB on February 17,1937. He grew up on a farm north of Plum Coulee. John & Martha were married September 7, 1958. After living in various locations in southern Manitoba they settled in Winnipeg in the early 1970’s.

John worked at Northern Blower for 30 years. He took pride in his work and enjoyed the people he worked with.

As a young child John had a love for music. He sang in choirs, quartets and was part of a sing-along group for 37 years. He played his harpsichord in the music group and shared music in church and at Riverview, Marion Place, Union Gospel and various other places. John spent many hours fishing in his boat with others. Lots of fish stories to be told. John also had a love for older John Deere tractors. He had quite a collection of John Deere Memorabilia.

John had the ability to connect with people wherever he was. He loved to visit and chat. Monthly breakfasts with his cousins were greatly anticipated and he would never turn down a chance for coffee with friends and family.

The family would like to express their thanks to the Victoria Hospital 5 North staff for their excellent care of John. Visits with the VGH Chaplain were a comfort. The continued support of pastors Al Letkeman and Andy Porter is greatly appreciated.

Donations can be made in John’s memory to Nassau Street Church to continue outreach programs. (nassaustreetchurch.com)

A private graveside service will be held with burial at Green Acres Cemetery, Winnipeg.