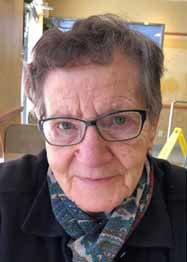 The private family funeral service will be held on Wednesday, June 2, 2021 at 2:00 p.m. at Birchwood Funeral Chapel, Steinbach, MB., with burial to follow at Heritage Cemetery.

To join the family via livestream please click the following link shortly before the time of the service. https://view.oneroomstreaming.com/authorise.php?k=1622491104117906

Mary was born in Arkadak, Russia on August 15, 1934, the youngest of four children. As a young child she lived through the horrors of World War II as her family fled from Russia to the Ukraine then to Germany and finally immigrated to Canada shortly after the war ended. Her family lived in Drake, Saskatchewan and it was there that Mary gave her heart to Christ and was baptized. She moved to Winnipeg as a young adult in 1953 and met Corny Krueger at a Sangerfest in Gretna a few years later. They fell in love and were married in 1959. They lived in Winnipeg where their three children were born. They returned to farming in 1967 in Dominion City, Gardenton and Vita. Corny and Mary were very active in the Stuartburn Gospel Chapel as youth leaders and in other ministries. Their commitment to the Lord was evident as they built relationships and served the people around them. Mary worked in the school cafeteria in Vita for a number of years where she joyfully served the students who enjoyed her great cooking. Corny and Mary also spent a few years in Aylmer Bible School in Ontario, serving as house parents and mentors to the students. In 1986, they moved to Steinbach where Mary worked at Penner Foods and Steinbach Bible College, and after retirement worked at Ten Thousand Villages and then later at the MCC Thrift Store. Throughout her life, Mary was a talented seamstress who served the people around her by sewing, altering and mending clothes. Corny and Mary had an open-door policy in their home and were always welcoming people into their home and their lives. After Corny passed away in December 2016, Mary continued to build relationships with people young and old and the open door to her home continued.

The past few months, as the reality of cancer became evident, Mary continued to live with grace and contentment. The family wishes to express their gratitude to the “angels” at Silver Lining Care who treated her as family as they cared for her and for Homecare and the pallative care nurses who provided support to ensure her comfort.

The private family funeral service will be held on Wednesday, June 2, 2021 at 2:00 p.m. at Birchwood Funeral Chapel, Steinbach, MB., with burial to follow at Heritage Cemetery.

To join the family via livestream please click the following link shortly before the time of the service. https://view.oneroomstreaming.com/authorise.php?k=1622491104117906

If friends so desire, donations in memory of Mary Krueger may be made to Back to the Bible, (www.backtothebible.ca)