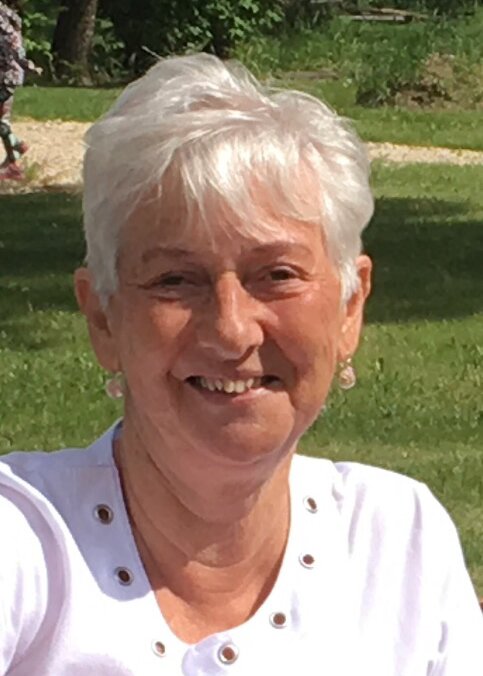 A private family memorial service by invitation only is being planned for Tuesday, October 12th, 2021, at 2:00 p.m. at Heartland Community Church.

A private interment will be held.

To view the service please visit the following link at 2:00 p.m. on the day of the service. https://www.youtube.com/channel/UCmUvLaaIHxFsmEVTxOZO-bg

Hilda Marie Koop aged 77 of Landmark, Manitoba passed away after struggling with the impacts of brain cancer for over fourteen months.  Hilda died at the Maplewood Manor in Steinbach just before midnight on Saturday, August 28th.

She was predeceased by her husband of 51 years, Robert Koop, her parents Margaret and Peter X Reimer, her sister Barbara Plett, and niece Jennifer Geisbrecht.

Hilda was born in Winnipeg on June 7, 1944.   She grew up and lived in Landmark for most of her life.  Planted in the middle and at times feeling lost between two older and three younger siblings, Hilda found ways to define herself and remain close to, depend upon, and appreciate family.

Hilda often told stories of running over to the Hildebrand's home next door.   Hilda and her cousin Violet, who later become her sister-in-law and remained a friend until her last day, spent a lot of time together. By the steady stream of muffins that came from Sharon, it is clear that those cousin connections remain strong.

Although Hilda loved walking, reading, and gardening outdoors, she was not a fan of ‘roughing it.’  This may in part be due to her family not having indoor plumbing until the early seventies and the first home her and Bob built was a basement with a straw bale roof that leaked every spring.

Hilda’s first official job was at Investors Syndicate.  In her memoirs, which she began to write after her cancer diagnosis, she states that she really enjoyed her work and that they appreciated her and wanted her to return to work after her maternity leave.  There is no doubt that Hilda would have been in upper management if she made that her career choice.

Hilda met Bob when she was sixteen.  Shortly after that, they started ‘going steady,’ and soon after that they got married and began a family.  With two young children in tow, Hilda and Bob moved to Elkhorn, Manitoba and then Wawanesa, Manitoba.  Hilda managed the house and the kids well without the support of extended family, while Bob shingled and learned to work as a plumber.  When Denise and Russ were five and three years old, Hilda and Bob rented and moved into a house on the Penner farm property in Landmark.  Construction on their first house build began at this time.  When they moved in, they did have indoor plumbing and they also had mice and indoor eavestroughing.  This was necessary due to water coming in when it rained.  It turns out that straw bales are effective for insulation and they also have a saturation point.  After five years Hilda and Bob had enough funds to build the main floor and get an actual shingled roof in place.

While living in the basement, they had their third child, Matthew, hosted family gatherings, and got involved in the community Church.  Extended family and life at the arena were central to their lives.  Hilda worked in the canteen and was a janitor at both the arena and later at Prairie Rose church.  They took over the local restaurant with Dora and Sid Koop and renamed it K’s Kitchen.  Hilda reflects on these as the hardest times in her life.  She felt like no matter what she was doing or where she was, the restaurant consumed her.  Her recent stories reflect her appreciation for family support in this endeavour, trusty pie bakers, and the relationship she developed with her nephew Stuart and niece April.

Hilda seemed happiest when she could clean a house, complete a project with one of her kids, or work at the Thrift store.  She never shied away from working or walking.  Bob used to comment on the pace she took when doing anything and admitted it was impossible to keep up with her.

Hilda loved to travel.  She loved the laughter and singing that accompanied road trips with her sisters, birthday trips into the Pembina hills with Val and Denise, and the many business trips her and Bob took with colleagues that became friends.  Hilda frequently visited her son and grand-daughter in Kelowna.  Hiking and going to the beach were highlights of these trips.

Hilda loved to socialize. She was never happier than when she had a plan (or two) to meet with one of her friend groups.  These included the quilting group, the canasta ladies, book club, and weekends at Falcon Lake with her friend Ruth.  At the lake, they set a limit of three 1000-piece puzzles per weekend.

Hilda volunteered at the MCC thrift store in Steinbach, travelled to St. Boniface Hospital with a group of women to sing on various wards and was quite proud of her legacy as blood donor.

Hilda loved her grandchildren. She loved cooking for them and teaching them her favourite recipes, playing games, going back-to-school shopping, and just hanging out together watching movies.

Hilda was diagnosed with terminal brain cancer in June of 2020.  It was heartbreaking to watch one so vivacious, disappear by degrees.  The level of adaptation was a steep learning curve for everyone.  Laughter, tears, and many family ‘huddles’ helped everyone get through really tough times.

A private family memorial service by invitation only is being planned for Tuesday, October 12th, 2021, at 2:00 p.m. at Heartland Community Church.

A private interment will be held.

To view the service please visit the following link at 2:00 p.m. on the day of the service. https://www.youtube.com/channel/UCmUvLaaIHxFsmEVTxOZO-bg

Special thanks also go out to family and friends who stood by Hilda and her family throughout her illness, via meals, phone calls, visits, prayers, and words of encouragement.

Donations in memory of Hilda may be made to the Mennonite Central Committee Thrift Store 409 Main St., Steinbach, R5G 1Z6 or to the St. Boniface Hospital Foundation C1026-409 Taché Ave. Winnipeg, MB R2H 2A6.  https://stbhf.ca/en/