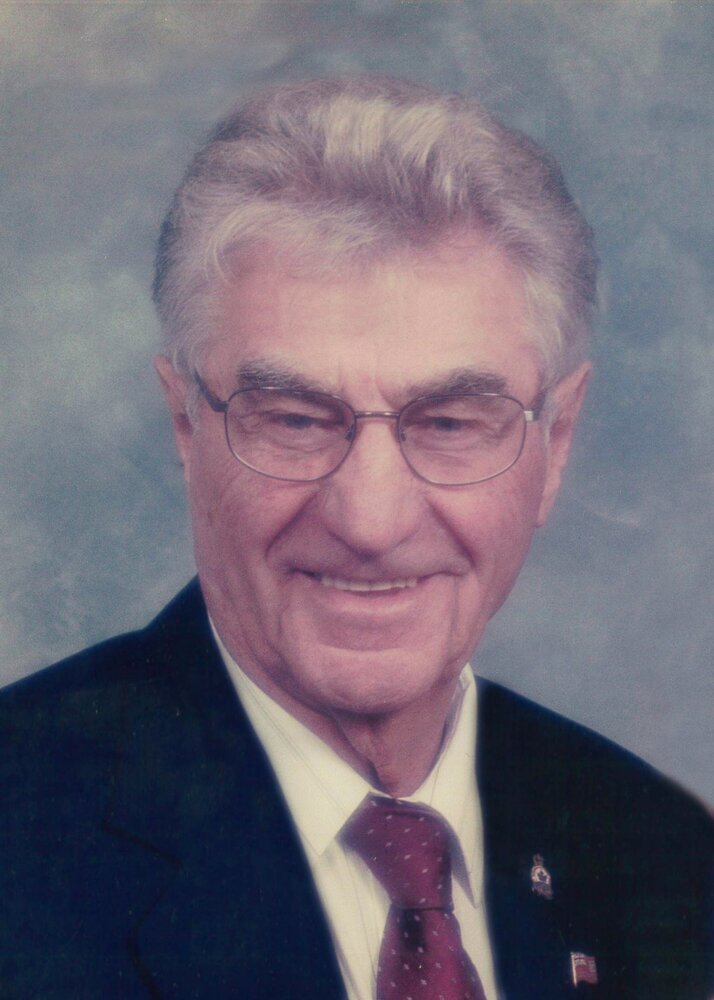 With deep sadness we announce the passing of William Smidt, our dear father, on Wednesday, September 22, 2021, at Niverville Heritage Life Personal Care Home, at the age of 98.

William was born in Arnaud, MB. He had five sisters and two brothers. He developed a strong work ethic from an early age assisting his father in the blacksmith shop. Dad joined the army at the age of 17, taking his basic training in BC. In 1943, at the age of 20, he was called to active duty in WWII and served with the Canadian Infantry Corp, Lake Superior Regiment, 4th Division, across continental Europe until March of 1946 when he was discharged holding the rank of Corporal. He was a Life Member and Service Officer with the Royal Canadian Legion Branch 160 in Dominion City. Dad and Mom never missed a Remembrance Day Service, including two trips to Europe to celebrate the 40th and 45th anniversaries of the Liberation of Holland.

Dad and Mom met in Tolstoi, MB at a dance and were married in Holy Ghost Church in Winnipeg in 1950. Dad purchased farmland in the Arnaud district where he was a grain farmer, supplementing his income during lean years by driving truck and hauling grain. Dad gave back to his community by serving on the Arnaud School Board and on the Committee of Holy Trinity Catholic Church in Tolstoi, MB.

Dad took special care of his vehicles, was well organized, and was always able to offer good advice. He enjoyed fixing things and spending time in his garage. He was a great storyteller, enjoyed meeting new people, and was always willing to help someone in need. Family was a priority for Dad, and we felt his love and support.

In 1989, Dad and Mom embarked on a new adventure. They purchased a motorhome and became snowbirds, travelling to Weslaco, Texas, where they made strong friendships at Ranchero Village. Favourite activities included attending dances, having friends over for meals and lots of canasta, shopping in Progreso, Mexico, and picking oranges and grapefruit. They always brought plenty home for family! During the summer, family was included in RV trips to Detroit Lakes, South Dakota, BC, Ontario and Manitoba.

In 1999, Dad and Mom decided to leave Arnaud and build a new house in Steinbach, where they lived in a home that they loved for 18 years. Family and neighbours enjoyed the apples from their trees and the vegetables from their garden. Dad proudly flew the Canadian flag in his backyard.

The family would like to thank the staff at the HLPCH for their compassionate care and support.

A private family Mass has been planned with ash interment at Heritage Cemetery, Steinbach, MB.

Donations in memory of William may be made to the Salvation Army or a charity of one's choice.