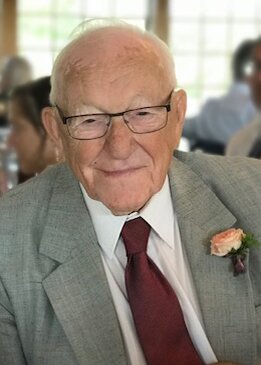 It is with great sadness and a heavy heart that the family announces Herb passed away on Saturday, September 25, 2021, at St. Boniface Hospital, Cardiology, surrounded by his family. He was born at home on the farm in La Broquerie, MB., where he worked hard as a child and young man. He was the third youngest son of nine children. He met the love of his life for 67 years, Eileen Fernsel at a country wedding. They were married and lived in a small rooming house in Winnipeg, eventually building their first home.

Soon after they started a family and were blessed with three children, Wayne (Shelley), Teresa (Larry) and Barbara (Michael). When his kids started to play sports, whether it was baseball or hockey, he was extremely proud of them, driving them to early morning practices and travelling to tournaments where he made lifelong friends. With the arrival of grandchildren Erin, Ian, Jamie, Sara, Rebecca, Adam, Justin, Ryan and Elise, he continued to be the biggest fan, following them to their many games, concerts and activities.

Herb worked in the steel industry with Drummond McCall for 32 years. He ended his career as plant manager, retiring in 1990, earning the respect and friendship of all who worked with him.

His passion for sports led him to a part time job with Winnipeg Enterprises for 30 plus years, as a parking lot attendant. This was not so much about the money as it was about the free entrance to Jets and Bombers games. He remained a loyal fan right until this year’s Banjo Bowl.

After retiring at 57, Herb and Eileen hit the road in their fifth wheel and spent several winters in Texas. His retirement years were spent with family and many friends. Herb loved to play cribbage and rook, enjoyed a good meal,  watching sports, game shows and taking strolls around The Manor.

His 11 great grandchildren brought him happiness. He loved teasing the little ones by poking them with his cane and watching them giggle. His smile and jokes will be missed by many.

Generous with his time and always concerned about others well being, “Herbie” will be sorrowfully missed by many nephews, nieces, his two sisters and three sisters-in-law. He was strong in his faith, as a lifetime member at Church of the Cross and is now resting in his eternal home.

He will be remembered for his kind heart and gentle spirit.

The family would like to extend thanks to the Cardiology team at St. Boniface Hospital.

Celebration of Herb’s Life will be held on Saturday, October 2, 2021, at 2:00 at the Lutheran Church of the Cross, 560 Arlington Street., Winnipeg. Interment to follow at St. Paul’s Lutheran Cemetery, Steinbach, MB.

If friends so desire in lieu of flowers, donations in memory of Herb may be made to Luther Village, 560 Arlington Street, Winnipeg R3G 1Z5 or a Charity of one’s choice.

We will miss you forever.