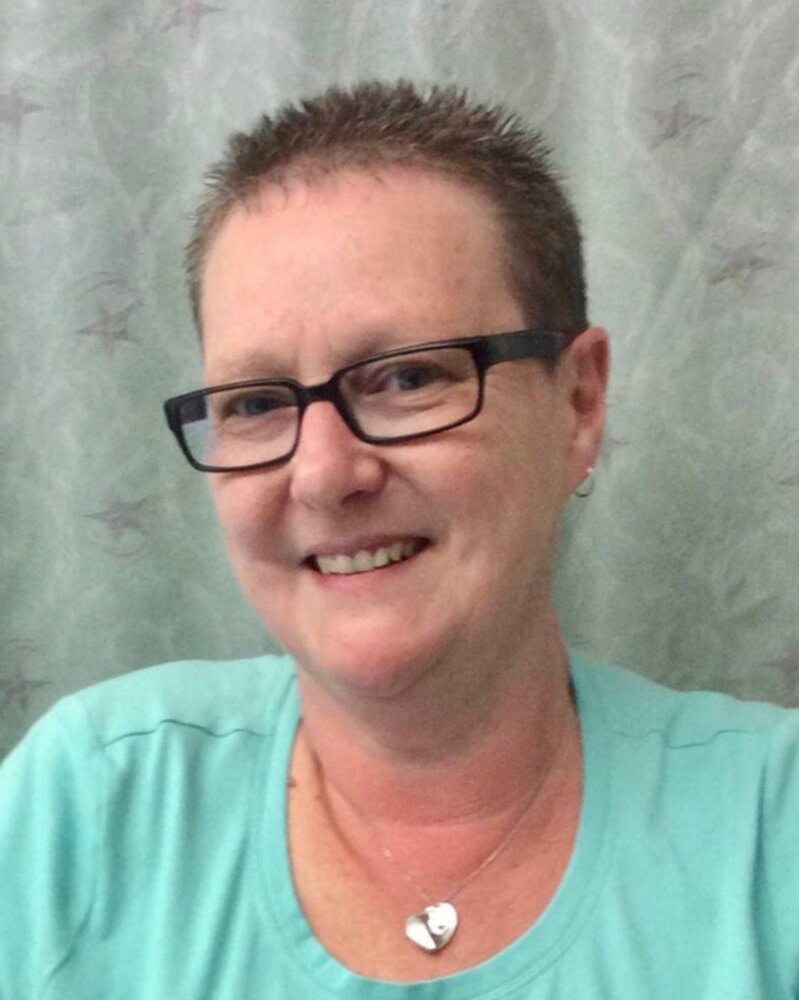 It is with deep sadness that we say good-bye to our wife, mother, grandmother, sister, aunt, niece, cousin, co-worker, favourite cashier, and friend Esther Dueck. Though we grieve, because of the hope that we know Esther had in the Lord Jesus we also have much joy. Her husband Cornie and their children were able to be with Esther, age 62 as she peacefully finished her race on the morning of October 13th, 2021, at the Grace Hospital in Winnipeg, MB.

Her early years were spent living in the country just outside of Steinbach, when at the age of eight her family moved to Winnipeg. Mom lived in Winnipeg until the age of 15, at which time she moved to Steinbach to begin attending Bible School. After grade ten Mom began working at Loewen Windows, where she became friends with Dad’s sister Tina (thank you auntie Tina). Tina introduced Mom to dad in 1978 and they dated for about two years before getting married on June 7th, 1980, at the Gospel Fellowship Church in Steinbach.

Mom had a passion for people. Whether it was connecting with her customers, co-workers, or friends she met at work, or hosting family gatherings, get togethers or messaging with her many extended family members online, she made it a priority to remain connected. One of the ways Mom poured into relationships was by using her gifts to bless others such as crocheting blankets, dish clothes and baking muffins and cookies for literally tons of people. Mom also would often spend hours talking on the phone with family and friends inquiring about the current events and prayer requests of their lives. Whatever she did, she did so by loving people. Mom has left an incredible inspirational legacy that has touched the lives of many.

Mom loved Jesus and demonstrated her faith in Him persistently through her words and actions. Mom was baptized on profession of her faith on July 15th, 1979, at the Gospel Fellowship Church in Steinbach. One of Mom’s special gifts was praying for people. She would pray daily, probably multiple times a day for her friends, family and even people she barely knew.  In the days since her passing, as we have been sorting through papers and documents we have discovered prayer lists she kept going back years and years and filled with names of people we have never met. Dad testifies that every morning before going to work Mom dedicated the time to praying for her co-workers at Canadian Tire. She would often reply to Dad if he would try to speak to her during this time, “Quiet, I am praying for my friends and customers at work.”

We would like to extend our most sincere thanks to the medical staff at the Grace, St. Boniface, and Bethesda Hospitals for serving and caring for Mom with much dignity and compassion even right to the end. We also thank them for openness, transparency and effort put into communicating with our family throughout Mom’s stay.

“Trust in the LORD with all your heart and lean not on your own understanding; in all your ways submit
to him, and he will make your paths straight.” – Proverbs 3:5-6

Cornie and the children acknowledge and extend their deepest appreciation of the overwhelming support we have received during this journey.