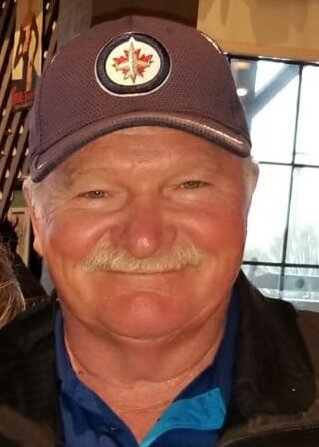 He was predeceased by his father and mother Klass and Mary Plett and in-laws Albert and Tina Kroeker sister in-law Viola (Denver) and brother in-law Harvey (Lorna).

Gary was born April 5, 1956, at the St. Boniface Hospital to Klass and Mary Plett. He was the seventh out of eight children. As he grew up, Gary lived on the family farm on the outskirts of Landmark, MB. He stayed on the farm until he was 16 at which point, he left home with his brother Rod, to join older brother Denver, to go work in the bush in Cranberry-Portage. Gary, having a strong faith in God, was baptized on May 27, 1973, at the Prairie Rose EMC. In his single years, he loved racing cars with his friends. Upon his return from the bush, he spotted a cute little waitress from the community café in Landmark who quickly became his wife. Gary and Joanne were married on Oct 15, 1977 and lived in a house trailer on the family farm. Gary worked at Landmark Agro and also was a roofer with his brother Rod during this time. Jason was born in 1979 and in fall of 1980, the family moved to Alberta where Corey and Anthony were born in 1981 and 1982. To support his young family, Gary worked long hours as a roofer, drove a logging truck and operated a skidder in the bush near Whitecourt, Alberta. In 1986, Gary bought the family farm from his parents and moved his family back to Landmark with Jennifer being born shortly after.

After arriving back in Manitoba, Gary started working for Westgate and was an employee there until the time of his passing. Through the years, Gary enjoyed many different hobbies. He loved playing football in his younger years and enjoyed watching it especially on Sundays. Watching his kids and grandkids playing sports was always a highlight for him, he could always be counted on to come cheer on his family. Gary loved camping through the years and also flying his RC planes. Family vacations were extremely memorable and in his later years, he really enjoyed travelling south in winter.

Gary was a man of great faith, wisdom, love, a quick wit and strong convictions. He loved deeply and was deeply loved. He will be missed dearly.

The come & go viewing will be held on Monday, October 25, 2021, from 7:00 p.m. until 8:30 p.m. at Birchwood Funeral Chapel, Steinbach, MB. Please line up in your vehicle on the west side of the building and a director will usher you in when it is safe to do so.

The private family funeral service will be held on Tuesday, October 26, 2021, at 2:00 p.m. at Birchwood Funeral Chapel, Steinbach, MB. To join the family via livestream please visit the following link shortly before the time of the service. https://view.oneroomstreaming.com/authorise.php?k=1634856366143878