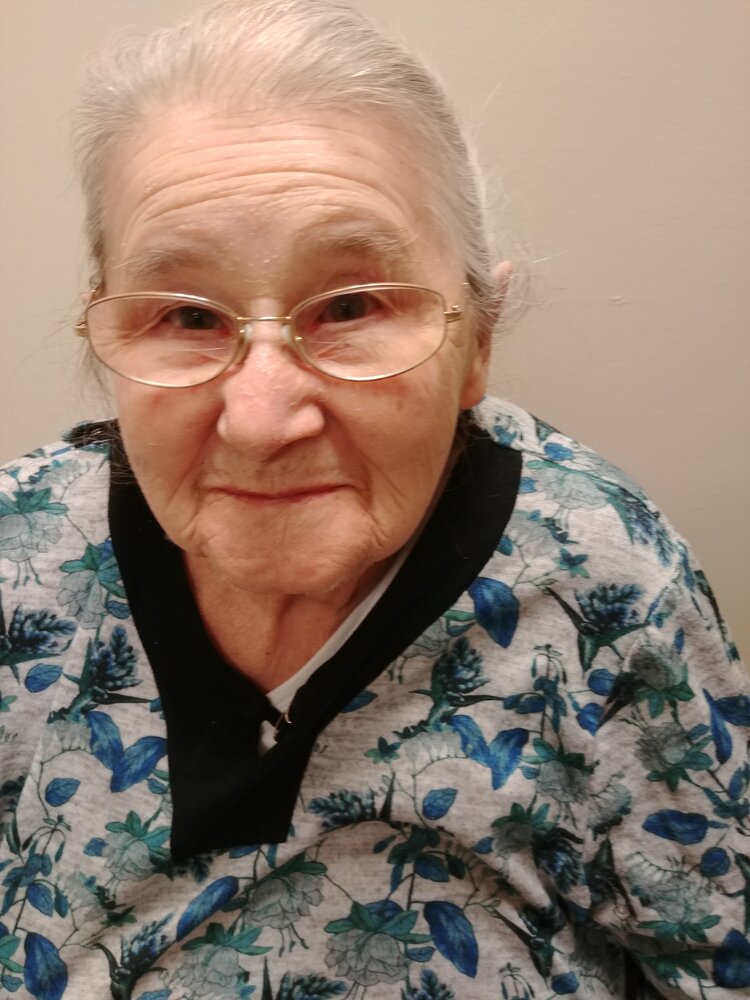 On September 30, 1930, our mom was born to Abram J. J. & Maria Friesen in a small community near Altona. She was the oldest of seven children. They moved to Steinbach and built a house on McKenzie. Years later the SRSS would be built directly across the street from their house.

Over the years, Mom was employed as a live-in Mother’s Helper, as a laundress at the Tourist Hotel, at a peach canning factory in Ontario, and, her last job as a young bride, at the St. Pierre sewing factory.

On May 29th, 1950, Mom was baptized upon her confession of faith at the Steinbach CMC church. On September 27, 1951, she married John F. Wiebe. Their wedding text was Joshua 24:15: “As for me and my house, we will serve the Lord.” And that is exactly what they did.

Mom and Dad bought the farm southwest of Steinbach that would be home for nearly 60 years. Here they raised their family of five children, and welcomed in-laws and grandchildren.

It’s hard to think only of “Mom.” It has always been “Mom and Dad.” Mom’s life was entwined with Dad’s in his involvements.

As a farmer’s wife, mom milked cows, cleaned the dairy, and brought meals to the fields during harvest.

As a Sunday School Superintendent’s wife, Mom was a spare teacher, and then became a regular teacher.

Mom was also involved with the CMC Mission Sisters, finishing the edges of quilts that they made in church for MCC.

Mom planted large gardens, and stocked her freezers and pantry for winter meals. She darned socks, patched jeans, and mended overalls. She loved her flower beds and planters. She washed the car every Saturday in the summer so it would be clean for church on Sunday.

Her life was busy and her days very full. But somehow she found time to read and time for crafts. She made denim blankets for each of her grandchildren, and a variety of other craft items.

When Dad could no longer drive, Mom took Driver’s Ed, and at the age of 78 she took her road test and passed. For the next six or seven years, until she voluntarily gave up her license, she had a perfect driving record.

In 2010, Mom announced that she was ready to sell the farm, and they moved to Stonebridge Villa. They lived there together until Dad moved to Rest Haven in 2011. For the next two years, until his passing in 2013, Mom visited Dad nearly every day. What a blessing that she could drive.

In 2016, Mom flew to BC to visit Elma & John for two weeks, accompanied by their daughter, Gloria. At the end of the visit, Ken flew out there to accompany her home.

Mom’s health was slipping and her strength was failing. In 2018 she moved to Rest Haven, where she was wonderfully cared for with dignity, humour, and gentleness.

On Thursday, November 11th, just after 5pm, mom’s spirit quietly slipped out of the room into the presence of Jesus.

Shirley was paging through Mom’s Bible recently and noticed the things she kept in it. There was a “Thinking of you” card from Elma & John; a picture of Dad; a couple of obituaries cut from The Carillon; two cards from missionaries; a poem called “Jesus’ Love Satisfies;” a note reminding her that her brothers & sisters were coming for a visit, and they would bring the food; and a picture taken during her visit to BC. These were important to her. She leaves a legacy of love for Jesus, for service, for family.

She’s gone now. A few minutes before she died, someone knelt beside her bed and said, “It’s not goodbye, Mom, it’s see you later.”

The private family funeral service will be held on Wednesday, November 17, 2021, at 11:00 a.m. at Birchwood Funeral Chapel, Steinbach, MB. To join the family via livestream please visit the following link shortly before the time of the service. https://view.oneroomstreaming.com/authorise.php?k=1637016182148316