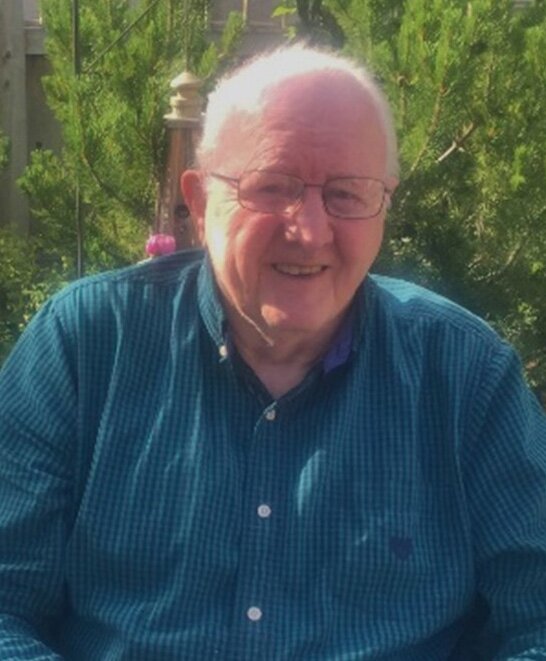 A private family funeral service for Melvin Penner will be held on Saturday, December 4, 2021, at 10:00 a.m. at Birchwood Funeral Chapel, Steinbach, MB., with burial at Blumenort Community Church Cemetery.

To join the family via livestream please visit the following link shortly before the time of the service. https://view.oneroomstreaming.com/authorise.php?k=1638397884151383

Melvin Penner of Blumenort passed away at Bethesda Personal Care Home with his children by his side on Monday, November 29, 2021 at the age of 89. He is survived by two daughters, one son, two sisters and their families. He was predeceased by his loving wife Eva on November 27, 2020, a daughter on September 8, 2020, four brothers, one sister and his parents.

Melvin was born on January 14, 1932 in Blumenort, Manitoba. He was the middle child in the Abram and Marie Penner family. He grew up one and a half miles north of the Blumenhof School. He loved his childhood home and often talked about how he used to sit at his bedroom window in the summertime when the moon was shining and listen to the whippoorwills singing in every direction. Dad enjoyed working hard on the farm as a young boy. He often reminisced about how much he enjoyed being part of the threshing gang because of the hard work, the camaraderie and storytelling and the excellent home cooked meals. In grade 9 Dad stopped going to school for 2 years to help at home on the farm. Due to a shortage of teachers Dad made the decision to finish high school and attend teachers’ college at the Normal School in Winnipeg.  He became a school teacher and taught at the Greenland School, a one room rural school where he taught all grades and all subjects for 5 years. He recalls his years teaching in Greenland with great fondness and as a young bachelor was frequently invited to the students’ homes for fantastic home-made meals. It was during this time that a young woman in nursing training caught his eye. He showed up at the nurses’ residence at Grace Hospital one afternoon to ask Eva out for a milkshake during her last year of nurse’s training.  They discovered a mutual desire to serve in missions and one day start a family. Dad changed his plans to go to Bible School and go into missions in the states and Mom changed her plans to be a missionary nurse in the north. They both felt that God had brought them together and they were married on September 5, 1958.

After they got married Dad started Bible School while Mom worked as a nurse until their first daughter Beverly was born. When Dad finished his Bible School training they moved to Ridgewood where Dad taught school for several years and they had their second daughter Christine. They later settled in Blumenort where their first son Dewayne joined the family. After many years in Blumenort, they embarked on a 3 year adventure in northern Alberta where their youngest daughter Jocelyn was born. They returned to their home community of Blumenort and resided there for over 45 years enjoying the fellowship of many friends from the church and community. Dad was a teacher and principal at the Blumenort School for many years before he retired at the age of 58. Throughout his 34 years as an educator and administrator he served in the Blumenort Church as an assistant pastor, and after retirement from teaching he became the full time pastor for 8 years. When he stepped down from full time service he continued to lead Golden Age Fellowship and later led Bible studies for the residents at Oakview Manor. During his final years at the Bethesda Personal Care Home he provided spiritual leadership to residents who requested to meet with him for Bible study and prayer in his room.

Dad’s favorite pastime as a child was playing hockey. As a young boy he yearned for the weather to turn cold and freeze in the fall so he could prepare an ice rink, skate and play hockey. He played for the Steinbach Huskies and went on to play on the hockey team for the Normal School while he attended teachers’ college. Dad was an athlete and enjoyed many sports but hockey remained his favorite sport throughout his life.

Dad was a lifelong learner and avid reader. He read the newspaper every day and remained well informed about world news throughout his life. He especially enjoyed reading history books and stories about what the soldiers endured during the second world war. His favorite author was Billy Graham. In addition to a love for books both Dad and Mom enjoyed music. As a young man Dad learned to play the accordion, sang in an octet in high school and later served as the church choir director. When they had a family they invested in piano lessons for their children and on special occasions took them to the symphony. In retirement Dad and Mom enjoyed traveling around the world. They attended the Mennonite World Conference in Europe, visited missionaries in the jungles of Venezuela and attended the distribution of New Testament Bibles in the local dialect of a tribe in Papua New Guinea. Dad also went on several trips to Europe with each of his brothers. It was very meaningful to him to visit communities which honored his heritage. One of the most significant trips he took was a memorial tour of historical sites from the second world war. Upon returning to Canada Dad met a neighbour at a local Remembrance Day Service and shared a photo with her of her brother’s gravesite in France. This was a very moving experience for them both.

Dad was a man of deep faith and love for God. He often spoke about his conversion experience at the age of 16 when a friend from the Interschool Christian Fellowship visited him on the last day of February and asked him if he wanted to become a Christian. Dad was supremely happy that he made that decision. He was baptized at the age of 20 in the Blumenort Church and later became the young people’s leader, choir director and minister. In addition to the Bible one of the best books Dad read to guide him on his spiritual journey was What It Means To Be A Real Christian by John R. Rice.  At the end of his life Dad continued to express gratitude for the commitment he made to Jesus Christ in that upstairs room so many years ago. He said that it made all the difference in his life. Dad demonstrated a sincere interest in everyone he met and connected with people of all ages from all walks of life. He served his community throughout his life wherever he lived. In recent years Dad was a great encouragement to those around him at the care home as he exuded a positive attitude and vibrant faith in spite of battling ongoing health challenges and grieving the loss of his daughter and wife in extended isolation.

Special thanks to Dr. Jessica Allen and all the staff at Bethesda Place Personal Care Home for the care that Dad received and for being family to him when we were unable to see him during a very difficult time in his life.

As Dad reflected on his life he often commented on how grateful he was that he married Eva and he marveled at how compatible their marriage was right from the beginning. His happiest time in life was being a father to his children. When asked how he wanted to be remembered he said he would like to be remembered for encouraging others, especially those with struggles in the faith.

Dad was a remarkable man. He was a farm boy, an athlete, a leader, an educator, a pastor, an encourager and an amazing father. We love you dearly Dad. We will carry you in our hearts forever.

A private family funeral service for Melvin Penner will be held on Saturday, December 4, 2021, at 10:00 a.m. at Birchwood Funeral Chapel with burial at Blumenort Community Church Cemetery.

To join the family via livestream please visit the following link shortly before the time of the service. https://view.oneroomstreaming.com/authorise.php?k=1638397884151383

Share Your Memory of
Melvin
Upload Your Memory View All Memories
Be the first to upload a memory!
Share A Memory