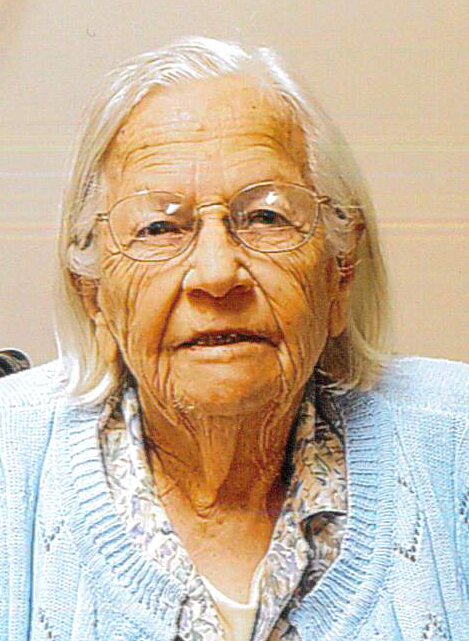 Maria Koop was born March 22, 1924 and died on December 4, 2021. Her parents were John N and Aganetha Koop. Her family lived in the area of Blumenort, Manitoba. Maria was proud of the fact that she was the oldest person in her entire extended family. She was aware of no one in her family tree that had lived longer than her.

She was predeceased by her parents and all her siblings but has two sisters-in-law, nieces and nephews and many friends in the church and community to mourn her passing.

Maria has always been a witty and strong person. She was never someone afraid to voice her opinion and right to the end of her life could engage knowledgably in a discussion on any topic of current events.

As a teenager Maria heard of missionaries for the first time from her brother Jacob who was attending a church in Winnipeg that supported missions. Even though missions were not encouraged in her local church at that time, Maria decided this is what she wanted to do with her life. In spite of discouragements and difficulties she never changed her goal once she had decided on missions.

At age 25 she started to attend Prairie Bible Institute in Three Hills, Alberta for 5 years of school to prepare for her chosen career. This was not an easy task for someone who had not completed high school and had virtually no money, but with her usual determination she completed her education.

During this time she was thinking about where to go as a missionary. The first country she selected was India until they closed the doors to missionaries. Her next country of choice was Germany. It had the advantage of having a language she could speak but this mission required her to be rebaptised which she refused to do. When her home church embraced missions about the time of her graduation she decided she would go to Mexico where they were setting up medical clinics. This required her to take a year of basic medical training and midwifery courses in Ontario. In 1959 she was ready and left for Mexico.

Her first station in Mexico was Pikachu, Mexico which was very isolated. In spite of all her training for missions one thing had been overlooked - Maria could not speak Spanish. She felt very lonely and isolated living in a place where she could speak with no one, but with her strong determination she eventually learned to speak Spanish. She never had her own place to live in during the early years of her life in Mexico but was given a bedroom in the home of other missionaries. Her work in Mexico at first was to run a medical clinic. It was operated like a walk-in clinic with people coming in with all variety of medical needs to be treated. This included people bringing in their sick chickens, cows or pigs. She delivered many babies, usually walking long distances out into the countryside to the women's homes. It was at these times; waiting for the baby's birth (once she could speak Spanish) that she would tell the women about Jesus. Eventually she started a children's Sunday school, going door to door to invite them to come.

When the church closed the medical clinics Maria moved to Western Mexico. Her work as a missionary changed to doing children's and women's ministries and in the summer cooking at children's camps run by the Mexican churches. Eventually she moved to Soto Maynez and in her last years as a missionary where she managed a Christian bookstore. In 1989 Maria retired.

Everyone who knows Maria knows about her love for her pet birds. She usually had a parrot as a companion in Mexico, teaching them to speak a few words in English, Spanish or Low German. She loved the sound of their welcoming screeches when she approached her home.

The largest regret in her life was how much of the life of her siblings and their children she missed by being so far away. She loved them all and wished she could have been more a part of their daily joys and struggles.

Maria remained her feisty self until only a few weeks before her death. After a fall in the hospital she made one of her last comments with her unique sense of humor. As the nurse came to assist her off the floor Maria said, "l thought I would have my nap on the floor today."

Maria was loved by many and will be missed by them all.

Safe in the arms of Jesus.

The private family live streamed service will be held on Tuesday, December 7, 2021, at 2:00 p.m. at Birchwood Funeral Chapel.

To join the family via live stream please click the following link shortly before the time of the service. https://view.oneroomstreaming.com/authorise.php?k=1638830865152187

The interment will take place at the Blumenort Community Church Cemetery.