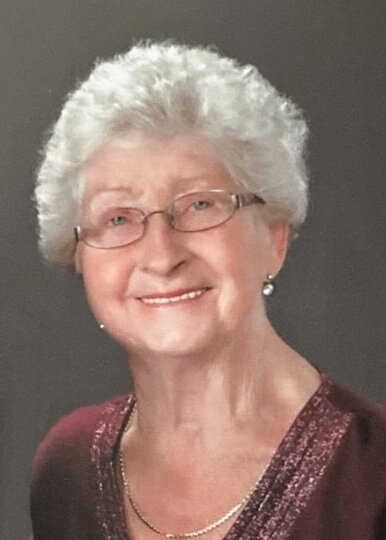 Naome (Dueck) Friesen, age 80, passed away on December 5, 2021. She was the beloved wife of Jim Friesen. She was pre-deceased by her parents, two sisters and a son-in-law.

Naome was born at home in Blumenhof, Manitoba on February 20, 1941 to John and Margaret Dueck. She was the third of seven girls, although the second born passed away as a toddler. Since there were no boys in the family, Naome always said she was like a son to her dad and helped him with the farming. She loved to work with animals and she loved being outside with her father. Naome simply loved to work.

On June 6, 1959 she married Jim Friesen. They had many adventures together. Jim says they lived in about 26 different places during their marriage. When they were first married, they worked construction jobs up north and Naome cooked for the crew. Jim mentioned a few of the places where they worked, Easter Ville, Big Trout Lake, Sandy Lake, Ear Falls and I’m sure there were more.

They started a family while they were living this nomadic lifestyle. The cooking for a crew of men and taking care of children became too much for Naome and so they eventually decided to stop.

A few years later they bought a hog farm and built up that homestead and business together. Naome loved farming and preferred to be outside taking care of the animals instead of being a housewife, although she managed both well. She was always a very hard worker. Hard work never intimidated her.

Later on, when Jim started trucking and drove long distance, Naome eventually joined him. She got her Class One license and drove big semi-trucks for five years.

Naome (my mother) was the strongest and hardest working woman I’ve ever met. Nothing seemed to ever intimidate her, she was a brave soul.

Serving her family was her way of showing love. Big family meals and get togethers were the norm at their house. She would regularly invite everyone over and treat us all to a fantastic meal. She was an excellent cook.

Naome was a very honest woman. She always had strong opinions and didn’t mind voicing them. Sticking up for her children and for herself came easily for her. As she aged, she grew frail and lost some of that fire in her soul. In spite of her strong character she always had an easy smile.

Although she didn’t have the easiest life and lived with a lot of pain, her trust in God never wavered. She clung to her Savior through all the difficult years. As long as she was able, our mom faithfully prayed for all her children and grandchildren and listed them each by name.

Rheumatoid arthritis was a burden she carried for a good portion of her life. She also had numerous surgeries and dealt with some cancer. Her pain was heavily medicated and that was how she was able to cope for many years.

We’d like to remember her the way she was in her prime - strong, brave and capable of anything. From cooking for a large crew, to farming, trucking, being a prayer warrior, a wonderful grandmother, a great cook and housekeeper and loving her family well, she truly was an amazing woman.

The private family funeral service will be held on Friday, December 10, 2021 at 3:00 p.m. at Birchwood Funeral Chapel, Steinbach, MB.  To join the family via livestream please click the following link shortly before the time of the service. https://view.oneroomstreaming.com/authorise.php?k=1639089474152965.