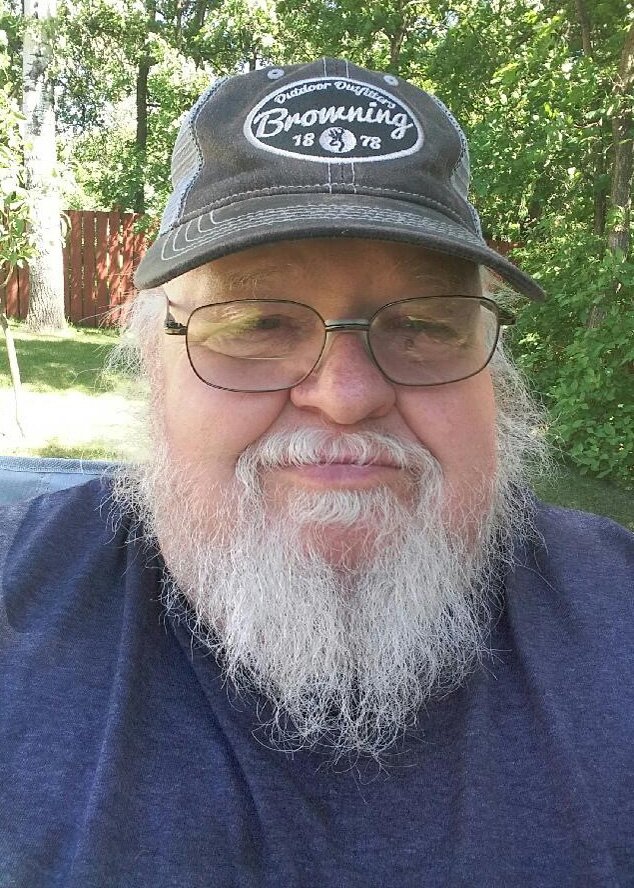 Ed Falk was born October 24, 1948, to Cornelius and Gertrude Falk in Winkler, Manitoba. He went home to his Lord and Savior whom he loved with all his heart and soul on Sunday, December 19, 2021. Most of his family surrounded his hospital bed with love, tears, prayers and goodbyes as he passed away.

Left to mourn his passing are his wife Sandi, children: Gerry (Corinne) and Audra (Jason); grandchildren: Tristen (Shaeleigh), Riley (Taylor), Jessica and Alexis (Jeremiah); and great-grandchildren: Ivy, Adeline and Jackson. He is also survived by his sister Elfrieda (Gerry), nieces and nephews and many friends.

Ed grew up on a small farm in the Grunthal area and attended a one-room country school and high school in Grunthal. Coming from a home where many stories were told about life, times and people, Ed continued this practise and told anyone who would stop to visit stories of his home, school days and his young adult life. When Ed was 18, he moved away from home to seek his way in the world. His first move was to Winnipeg to live with an aunt and uncle. Soon that move was not far enough away or adventurous enough (even if his cousin did introduce Ed to rock and roll music) so he followed that move by moving to Terrace B.C., Vancouver, and Toronto for a time. Many people learned to recognize what story was coming from him by his opening line, “When I lived in....."

Eventually, in 1976, the ill health of his father required Ed to move back to Manitoba to assist in the care of his parents.

Ed and Sandi started to date in 1980. Ed knew from the first date that he and Sandi would marry and on March 28, 1981, they began their married life.

In July of 1985, they adopted Gerry, a nine-year-old boy and the following summer they adopted five-year-old Audra. Ed and Sandi had moved to a small farm in the Pansy area, as Ed saw from his own childhood, the value of such an upbringing. Although Ed was often gone from home as a long-distance truck driver, he was deeply committed to his family. Every action, decision, discipline, teaching or fun activity was done with thought and the question "What affect will this have on the kind of man or woman my child will become?"

During his many hours spent driving down the highways, Ed started to listen to Christian radio. There he first listened to the verse-by-verse Bible teaching of John MacArthur and it had a profound effect on Ed. He grew in his Christian faith into a man who took his calling as a believer in Jesus Christ very seriously. He seldom had a conversation with anyone after this time that did not turn into a deep spiritual discussion of some kind. His friends started to call him a preacher long before he preached his first sermon.

Ed also had a heart for music. He could not play any instrument, could hardly carry a tune but next to God and the Bible, music was the strongest influence in his life. If he was listening to music, everyone had to stop talking because Ed listened to every word sung. The song became who he was in that moment. With new technology Ed could share this love with others and he frequently sent out links to new songs he had discovered.

Ed had always said that when he would no longer be living in a country home he would buy a property somewhere out in the wilderness. When he heard that three acres surrounded by the Sandilands Forest were for sale he didn't wait a day to snap up the place. Here in his last few years he found so much joy and relaxation. He loved to ride his quad far down a lonely trail, turn it off and just listen to the silence.

On November 8, 2021, Ed began his last journey on this earth. What started as a scratchy throat, developed into a serious illness that resulted in him being in the ICU for a month before his passing. He finally had no strength left in his body to fight off the invading infections and on Sunday evening, December 19, 2021, he passed peacefully into the arms of the God he loved so much. Although Ed is not here physically, he lives on in our lives through the profound effect his deep love for Jesus Christ had on us and he lives eternally with his Father in Heaven. The family wishes to thank all of those who cared for Ed during the time they could not, the ambulance attendants, the staff at Bethesda Regional Health Centre and the staff at St. Boniface ICU. Your care, for not only Ed's wellbeing but ours as well, was obvious and appreciated by us.

A come & go viewing for 25 people at a time will take place on Wednesday, December 29, 2021, from 6:00 p.m. to 9:00 p.m. at Birchwood Funeral Chapel. Please line up your vehicles along the west side of the building and wait to be invited in.

A private service and burial have been held.