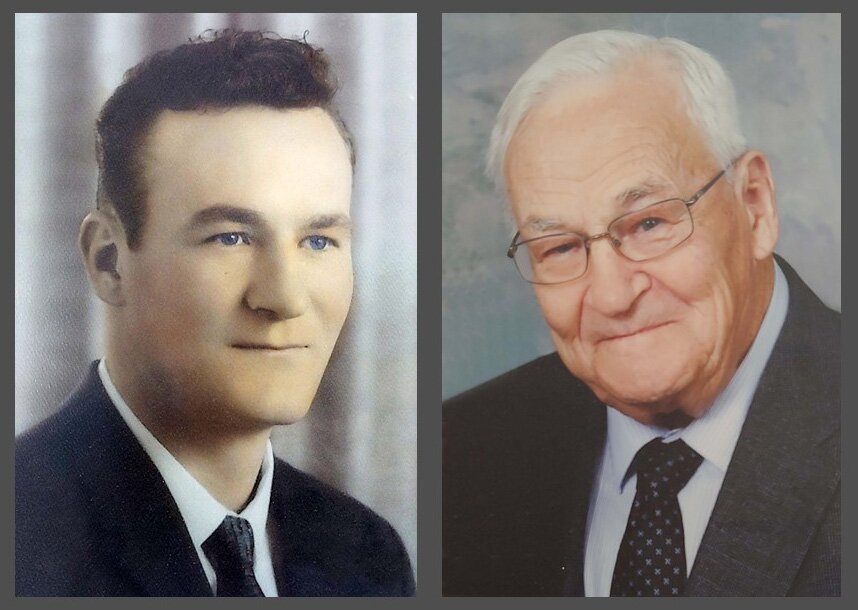 He is predeceased by his wife Lena, parents Gottlieb and Christine (Grienke) and grandson Nikolas. He was also predeceased by his in-laws: Rudolf and Olga Schnellert, Anne and Henry Schalla, Ida and Reinhard Kisser, Fred, Arnie and Harold Schnellert, Lorin Holme and nephews Lawrence and Ron Kisser, Brian Freund and niece Sharon Holme.

Art was born on January 25, 1933 on his family farm in Friedensfeld. He helped his parents on the farm and worked at Steel Briggs in Winnipeg. Art married Lena Schnellert on June 17, 1961 and they built a house and started to farm across the road from his parent’s farm while he worked in Winnipeg. He and his father were progressive farmers at the time, being the first to purchase a self-propelled combine in the area which they also used for custom combining. On October 1, 1965 they took over his parent’s farmyard moving their dairy cattle across the road as they had retired to Steinbach. Dad was most at home on the farm working the land. Together our parents enjoyed snowmobiling, playing rook and whist and square dancing. Art was known to be a joker and loved to tease. He was fond of heavy horses having worked and ridden them to country school. He also enjoyed going to auction marts and the Morris Stampede where the Ferris wheel was his favorite ride which he enjoyed both with his children and later with his grandchildren.

He was also involved in the local community as he was a founding member of the Friedensfeld Community Centre which was built on the site of his childhood school, about 1 ½ miles from the farm where he lived most of his life and was a faithful member of St. Paul’s Lutheran Church.

They dairy farmed together until selling the cows and milk quota in August 1993 due to health reasons and subsequently moved to Steinbach in 2001. In total dad lived on the farm for 58 years of his life.  The family farm became a Centennial Farm in 2005 as it has remained in the Weidman/Grienke family.  Together they enjoyed traveling to Hawaii, the East Coast, Australia, cruising by ship to Alaska and annual visits to Alberta.  Dad enjoyed a good meal and loved his sweets and would help Mom with the garden and the fruit preparation in his retirement. When Mom got sick with cancer in 2015, Dad became her primary care giver until her passing in March of 2016. He dearly missed the daily banter and the steadfast companionship of their 55 years together.

Art enjoyed wood carving, puzzles and in later years watching the Blue Jays, The Price is Right and Dr. Phil. He enjoyed taking Sunday drives in the country, playing cards and chatting with people and visiting the senior’s center. Art instilled in his children a strong work ethic and by example taught us resilience and self-sufficiency.

In the last few years his brother Harold became his lifeline and support.  Social interaction due to the pandemic became centered on his homecare workers and he enjoyed the chats and interesting conversations that would result.

The come and go viewing will be on Sunday, January 2, 2022 from 1:30 to 4:00 p.m. at Birchwood Funeral Chapel, Steinbach, MB., Please line up in your vehicle on the west side of the building and a director will usher you in when it is safe to do so.

A private family graveside service will be held on January 3rd.

In lieu of flowers, if friends so desire, donations in memory of Art may be made to St. Paul’s Evangelical Lutheran Church Memorial Fund, 465 Henry St., Steinbach, MB R5G 1A1