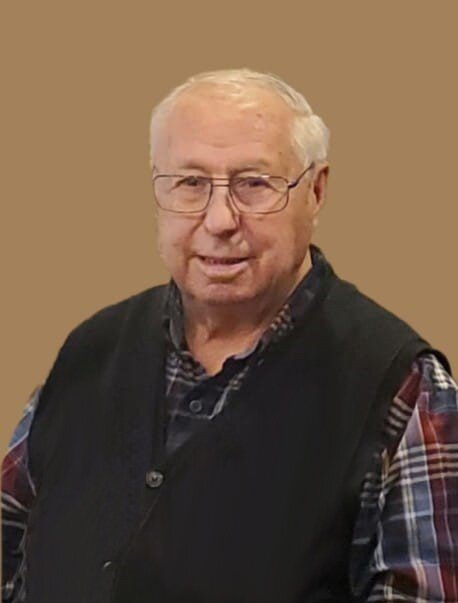 He was predeceased by his parents. As an only brother, he will be lovingly remembered by his five sisters: Mary Martens (Bill), Betty Friesen (Jake), Agnes Penner (Dennis), Linda Sawatzky (Tony), Alda Hildebrand (Phil), and their families.

Dick was born to Abram F. and Susanna Enns on March 3, 1941 in Steinbach, MB. He grew up on a farm with his 5 sisters in the Blumengart area (south of Landmark). He made the decision to follow Christ as a teenager and was baptized at the Silberfeld Church in 1960. He married Nettie (nee Friesen), the love of his life in Silberfeld, MB. on July 23, 1961. They were blessed with one son and one daughter.

They built a small home on his parents’ farm and spent the first 5 years living on the homestead while employed as a drywall taper. In 1966 they moved the home onto their own property and built a chicken barn to start Dad’s farming career. Farming was Dad’s passion and involved many hours of hard work and much perseverance. They moved off the chicken farm in 1979 and moved down the road to focus on grain farming.

Dad’s faith was important to him and was a member of the CMC Conference and served in many capacities throughout his life. Dad had a servant heart and always wanted to help people and was known in the neighborhood as the person who could fix almost anything. Dad also exemplified this attitude by serving in other areas. Mom & Dad had the opportunity to volunteer on mission trips and spent time in Italy and Ireland using his skill as a drywall taper. Long lasting friendships were created through these mission trips. Dad had several health challenges during his life but never lost his faith in God. A verse that became very important to Dad was Proverbs 3:5-6:

“Trust in the Lord with all your heart and lean not on your own understanding; in all your ways acknowledge Him, and He will make your paths straight.”

They semi-retired in 2003 and moved to Steinbach. Semi-retirement involved custom mowing, and later installing garage doors. Dad always seemed to find jobs that allowed him to work together with Mom. Dad spent much time helping Mom plant flowers and groom the yard. You would often find Dad tinkering in his shop or making something for the grandkids while listening to messages or gospel music. In 2016 they finally entered full retirement and moved into Stone Creek Courts. Mom and Dad were able to spend a lot of time together, enjoying their condo and retirement.

Dad suddenly fell ill on December 29, 2021 and was admitted to Bethesda Emergency on Jan. 8, 2022. After a short struggle, he passed away on January 10, 2022. Dad was dearly loved and will be greatly missed by family and friends.

A come and go viewing will take place on Saturday, January 15, 2022, from 4:00 p.m. to 6:00 p.m. at Birchwood Funeral Chapel, Steinbach, MB. Please line up in your vehicle on the west side of the building and a director will usher you in when it is safe to do so.

A private family funeral service will be held on Sunday, January 16, 2022, at 1:30 p.m. at Birchwood Funeral Chapel, Steinbach, MB. To join the family via livestream please click HERE shortly before the time of the service.