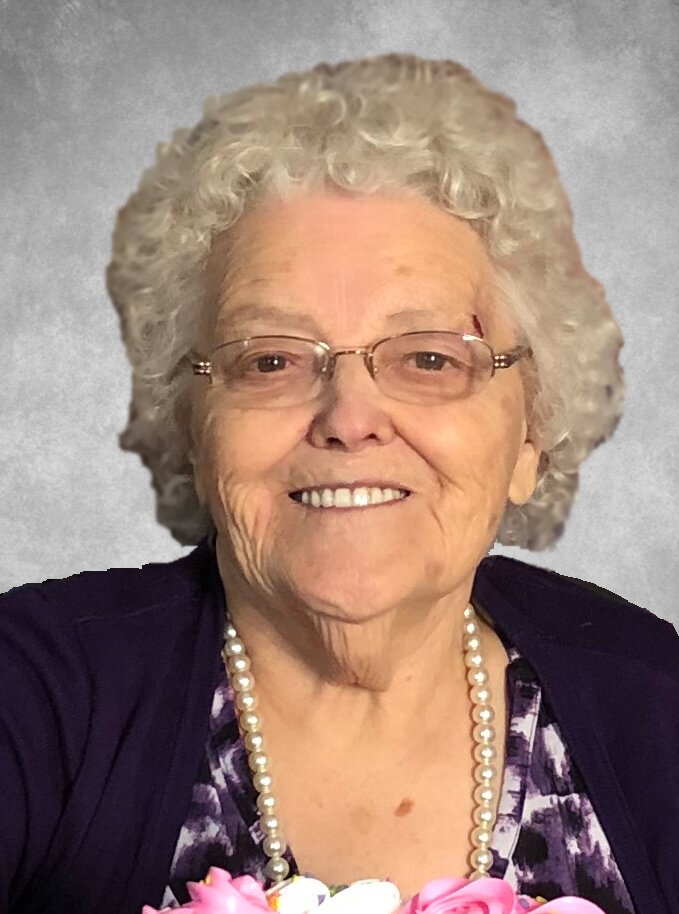 Margaret Funk was the firstborn to John F. Krahn and Margaret on a farm near Grunthal, MB on July 20th, 1933, later joined with 1 brother and 2 sisters.  The family moved to Paraguay in 1948, together with a lot of other Mennonite families that were promised new opportunity.  However, when they arrived there after a 3 month voyage, they realized that all they had given to them was jungle and so they were forced to live in tents while clearing the jungle so they could create space to build houses.  After 2 years of incredibly difficult conditions, her dad made the decision to move back to Canada, so they made the long return voyage in 1950.  When back home in Grunthal, mom got a job in Ontario where she met Otto Funk, from the Altona area, while working at Canadian Canneries in Grimsby, ON.  They were married May 16, 1953 and made their initial home in Winnipeg, then a few years later moved out to a 1 acre property on Highway 59, near Prefontaine Road.

For most of her life, mom was a devoted homemaker who took pride in making sure everyone had clean clothes, fresh buns and bread baked, and her home was cleaned corner to corner.  This was during a time when automatic washers were coming into the marketplace, but mom felt that they just didn’t get clothes as clean as they could be, so she would choose to “pre hand wash” by scrubbing each item on a washboard before throwing the clothes into the ringer washer for an extra level of cleaning!

Together mom and dad would plant and tend their large garden.  Mom had a real green thumb and her vegetable and flower gardens were evidence of that!  In the fall, all the vegetables would be gathered and many were frozen or canned for use over the winter.  Our cold room in the basement was always stocked and we needed 2 freezers to hold all the rest of the meat and baked goods she would make.  They grew enough food to feed the family and sold extra vegetables and raspberries to people driving past their house, with a little stand on their driveway.

Her cooking and baking were also strengths.  She would make a cream cookie called a “Fat Mama” which were craved by a LOT of people, and held a high trade value for Jeff during school lunches!   And her thin crepes were simply the best…..with either Roger’s Golden Syrup (that we bought in 1 gallon pails) or just white sugar sprinkled on them, chased down with about a half gallon of milk straight from the farm.

Mom’s gift was hospitality, and her house was always open to anyone; whether it was family, friends or people they didn’t know well.  She was always smiling, and loved to laugh.  She had a servant’s heart, usually doing the things she could do behind the scenes.  She would open her home to host neighborhood kids for 5 day clubs, taught Sunday School and Pioneer Girls clubs.

She loved coffee!  Edwards was her favorite brand, she drank it black and wanted it hot!

Both mom and dad were very involved in the formation and growth of Word of Life Mission Church in Niverville.  Her faith in Jesus was very important to her, she was a prayer warrior who would pray daily for her children and grandchildren.

After retirement, they sold their rural property and were among the residents in the first phase of Silver Courts life lease facility in Niverville, where they enjoyed the interaction with all of the other residents.  Life changed with the diagnosis of dad’s dementia, and when mom could no longer care for Dad at their home in Silver Courts, he awaited placement in a care facility.  After a brief period, he settled in at Heritage Trail Personal Care Home in Niverville, where he remained until he left us for his new Heavenly home on May 3, 2017, with family at his bedside.  Around that time mom needed more help as well, so she moved into the Niverville Credit Union Manor, an Assisted Living facility, where she resided until her death.

Just before the new year, mom took a turn for the worse and was admitted into the DeSalaberry District Health Centre.  She was there for almost 4 weeks, during which time her health rapidly declined to the point that she took her last breath just before 2am on January 23rd, with family at her side.

Mom is predeceased by her husband, Otto, her oldest daughter, Carolyn, her parents, her brother John and her brother-in-law, Jake.  She is survived by 2 daughters; Connie (Abass), Judy, and 1 son Jeff (Leona).  10 grandchildren and 11 great grandchildren.

Mom taught us to Love God, Love each other, and Love others.  She also taught us by her example, in life, to be faithful in marriage, have a strong work ethic and not to just think of ourselves, but rather look to those around us and do whatever we could to increase their quality of life.  Her legacy lives on in us!

The public come & go viewing will be held on Friday, January 28, 2022, from 6:00 p.m. to 8:00 p.m. at Birchwood Funeral Chapel, Steinbach, MB. Please line up in your vehicle on the west side of the building and a director will usher you in when it is safe to do so.

A private family service will be held with interment at Hespeler Cemetery, Niverville, MB.

In Mom’s memory, donations may be made to Union Gospel Mission in Winnipeg, who administer love and care to the hungry, impoverished, maligned and addicted people in downtown Winnipeg.