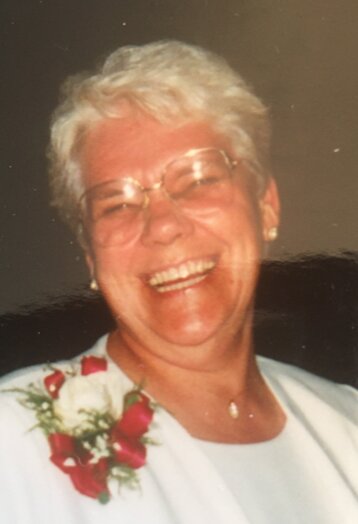 It is with profound sadness that we announce the peaceful passing of our mother and grandmother, Germaine LaPalme on Monday, January 24th, 2022 at the age of 83.

Germaine is survived by her daughters, Pauline (Reg) and Tania, her son Denis, as well as her five grandchildren: Robert, Brigitte, Colby, Reagan and Faith.  She is also survived by her sisters: Jeannine, Margaret (Peter), and sister-in-law Laurie and many other family members.

She was predeceased by her parents Rosina and Charlemagne Courchaine, her husband Maurice LaPalme, 11 brothers and sisters (Hector, Arthur, Louis, Thérèse, Victor, Gérald, François, Joseph, Jacques, Anne-Marie, Hector) and many in-laws including her best friend, Marilyn.

Germaine was born on March 28, 1938.  She grew up in Winnipeg.  After graduation, she spent six years in the convent, before meeting her beloved Moe.  Maurice and Germaine were married on August 22, 1964 and had three children. Because of Moe’s employment with the Air Force they travelled to many countries and lived three years in Germany.  After Moe retired from the Air Force, they purchased their first home in La Rochelle, Manitoba in 1974.  Soon after, she began her career at the Workshop in Saint Malo, educating people with developmental disabilities, which she enjoyed tremendously and excelled at.

Besides being a generous, caring and loving person, there was no challenge too great for Mom.  She could do anything she set her mind to, including ceramics, knitting, crocheting, sewing, cake decorating, writing poetry, wood working, home renovations, painting, and dancing, to name a few.  She even took a computer class in her sixties so that she could learn to email with her friends and family.  She was involved in many faith-based groups such as Foi et Lumière and Nathanael.  She was a devout Catholic and was actively involved in the Parish of Saint Malo well into her retirement.

One of Mom’s many passions was travelling. At the age of 18, she spent a year at Madonna House in Northern Ontario.  After leaving the convent, she travelled to Mississippi where she worked as a nurse’s aide for six months.  Once married to Moe, they had the opportunity to travel across Canada and western Europe which she enjoyed tremendously. Later on, she got to visit places like Jerusalem, Dubrovnic, Medjugoje, the Dead Sea and even Las Vegas.  She and Dad also enjoyed camping, especially with Uncle Jim and Aunty Marilyn.  With all of her great accomplishments, she also really knew how to slow down and enjoy the simple things in life and express gratitude for everything, including her amazing grandchildren.

The family would like to acknowledge the hard work and dedication of the staff at the Repos Jolys this past year.  Their care and dedication made mom’s life enjoyable.

A private service will be held for the family at a later date.

In lieu of flowers, donations can be made to the Alzheimer’s Society of Canada at 120 Donald Street, Winnipeg Manitoba, R3C 4G2, Alzheimer.mb.ca