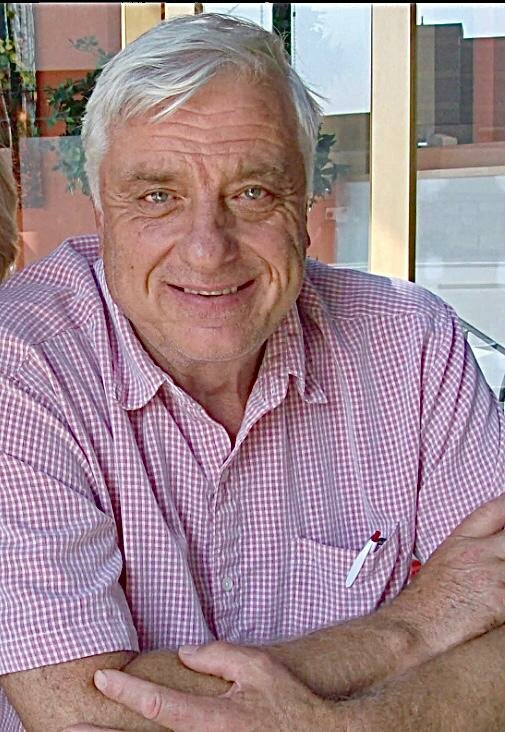 On Wednesday, March 9th, 2022 just after 6 pm, Waldon (Wally) Clifford Doerksen peacefully passed away at Bethesda Regional Health Centre. On a sunny and still wintery day, he held the hands and had the loving presence of family and close friends around him. He will be deeply missed by his family: wife Ruth, sons Trevor (Sveta) and Kris (Gennein), daughter Lori Mae (Matt) and his 6 grandchildren (Bailey, Addi, Ulyana, River, Ivy and Willow). He is also survived by his brother Arnie, sister Donelda, in-laws Jo (Gary), Carol and Jake.

Nearly 10 years ago, Wally was diagnosed with multiple myeloma, a type of immune cell cancer affecting his spine and other bones. He persevered through various treatments which included successes and setbacks. He endured the loss of vision in one eye (thanks to the speed of a hockey puck) and hip replacement surgery (giving him back increased mobility) - all the while focusing on mindset and the good things in his life. A true inspiration of walking through some of the valleys of life. After these many years, the treatment options shifted and his body was ready to finally rest. After 3 short days in hospital he died quickly and peacefully. The family would like to thank the staff and volunteers at CancerCare as well as his doctors, Dr. Krahn, Dr. Dao and Dr. Morden ND for their years of support and care.

Wally was born on November 29, 1946, in the area of Steinbach, Manitoba. The middle child in a family of 5 children, he grew up helping on the family farm and attended Mitchell, Twin Creek and then Blumenort schools. He had an early love of reading and enjoyed memorizing and reciting poems. He described playing soccer and hockey in winter, and softball and swimming at the local creek in summer.

Wally moved to Flin Flon after his grade 11 year in Blumenort. After working in the smelter for a time, he completed his grade 12 year and graduated from high school. Being a man of adventure, he biked all the way back from Flin Flon to Steinbach with a sleeping bag in tow (finding random grain shelters along the way to sleep in). The Carillon news did a story on Wally for this physical feat!

In the summer of 1968, he married his love Ruth. They first lived in Blumenort while he attended University of Manitoba, and then moved to Saskatoon while Wally completed his Physical Education degree at the University of Saskatchewan. He was involved in the National Parks program called Conservation Core at Riding Mountain National Park for four summers during his education degree. Trevor and Kris were born during these years - making them a family of four.

After a year of teaching Phys. Ed. at MBCI, and having stayed on Ruth’s family homestead (between Steinbach and Blumenort), they purchased the farm and began life as chicken farmers. Over the next four decades, they grew the chicken farm business - adding a second farm location and small restaurant shop to their experience. Lori Mae was born during these years on the farm and even after settling into retirement, Wally loved their home and yard - wanting to stay there until his final days.

Wally had many interests and passions. These often led to volunteering opportunities and various board involvements. He taught Sunday school from an early age and was involved in InterVarsity Christian Fellowship for many years. Coaching hockey started while in university and continued later with his kids' involvement, including ringette with Lori. He was on the boards of El’ Dad Ranch, Manitoba Chicken Producers, Nuffield Agriculture Scholars, Inner City Youth Alive and served as the chair for The Project Builders for 14 years. Travel was another keen interest of Wally’s, learning more about geography and the lifestyle of the people he’d meet. Wally and Ruth shared many small and large trips together in their 53 years of marriage - traveling with some of the organizations they were involved with as well as spending time with family and friends.

And while he farmed, served his community, sought learning and questioned the status quo, above all, he was a kind and generous father and friend. His faith and spiritual path evolved and grew over time, and he was so open to discussing this and asking questions along the way. He loved his family in his unique way, repeatedly expressing how time with his kids and grandkids gave him life, something beautiful to look forward to and “so many keys to (his) mental and physical well being”.

Wally had an amazing sense of humour and didn’t take himself or others too seriously. He enjoyed the fun and play of life, especially with loved ones. Sports (including hockey, fastball and football), singing and playing music (mandolin and guitar), hikes in the bush, rides on his RTV, or a sunset drive on his boat. But he could also sit and contemplate life over a cup of coffee or a good book - admiring the breathtaking view from his sunroom. Wally was an intelligent word-bird, thinker and philosophizer. He taught and guided so many through his own openness to learning and growth, writings and his listening ear. So many lives have been touched by this amazing man - and he will be missed dearly.

The memorial service will be held on Saturday, March 19, 2022, at 2:00 p.m. at Birchwood Funeral Chapel, Steinbach, MB., to join the family via livestream please click HERE shortly before the service.

In lieu of flowers, donations may be made to EMC Project Builders (https://www.emconference.ca/project-builders) or a charity of one's choice.