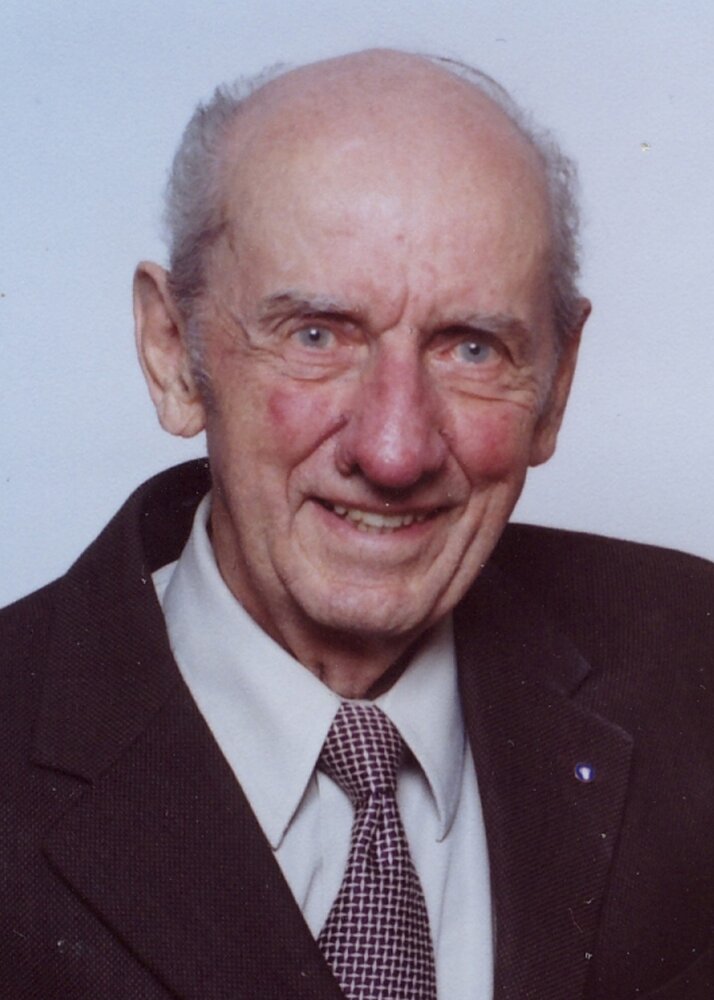 The spirit of Bill (William Edgar) Redekop gently departed from his body on March 24 at the Bethesda Regional Health Center in Steinbach. Born on Valentine’s Day in 1925, he lived three years less a century, demonstrating a life of care and consideration for others as individuals as well as communities to which he belonged.

Married in 1947, he was predeceased by Loreen (Kroeker), his lifelong partner of 67 years; his grandson Darcy Kehler; his sister Ruth Sapinsky and brother Wally; and three brothers-in-law: Hans Sapinsky, Henry Dueck, and John Dyck.

He is survived by his two children: Jennie and her husband Wes Kehler, and Vern Neufeld Redekop and his spouse Gloria; his six grandchildren: Quinn Redekop, Michelle Kehler Woodward, Natasha Redekop, Lisa (Redekop) Hayden, and Shaun Kehler; his twelve great-grandchildren: Ben and Linzi, Kiarra and Brooke, Maleana and Blaine, Clare and Lauren, Lily and Julian, and Easton and Ella; and sisters Lois Dyck and Helen Dueck, and sister in-law Chris Redekop.

He lived in the house he was born in, in Herbert, Saskatchewan until 2012 when he moved to Steinbach, Manitoba.

Bill’s life was dedicated to a ministry of service as a Christian layperson. From the age of 17 till he was 42 he was a John Deere Dealer going out of his way to empower farmers by selling them tractors through honest deals and supplying them with parts sometimes from early morning until evening hours. When Loreen exhibited the chronic symptoms of Multiple Sclerosis, he put his energy into farming and the development of a feedlot.

His civic leadership involved 60 years in the Chamber of Commerce at the local and provincial level, a number of years on the regional school board, and nearly 20 years as mayor of Herbert, which included active committee work for the Saskatchewan Urban Municipalities Association and the Federation of Canadian Municipalities.

His involvement in Christian organizations included a stint as Moderator of the Saskatchewan Mennonite Brethren Churches and 70 years as a Gideon, serving in a variety of leadership positions.

As important as his formal positions was the behind the scenes informal work he did in making representations for the Town of Herbert, offering personal counseling to marginalized youth, customers, business leaders, and Saskatchewan Premiers of different political parties.

Bill—“Dad” “Grandpa” “Opa”—was an inspiration to us his family.  He was a great role model.  At key times he was the “Rock” for some family members as they faced challenges. He showed his love to us by his continuous support spiritually and financially.  His love of classical and gospel music, as well as classic movies was contagious: especially Bells of St Mary, Miracle on 34th Street and Christmas in Vienna.

In his final years at Bridgepark Manor in Steinbach he was known for his generosity, his friendliness, his encouragement and affirmation of others, and his public expression of gratitude to visiting performers.

A public memorial service will be held on Saturday, May 28, 2022, at  4:00 p.m. at Birchwood Funeral Chapel, Steinbach, MB. To join the family via livestream please click HERE shortly before the time of the service.

An ash interment will be held at a later date.

Donations may be made to Gideons.