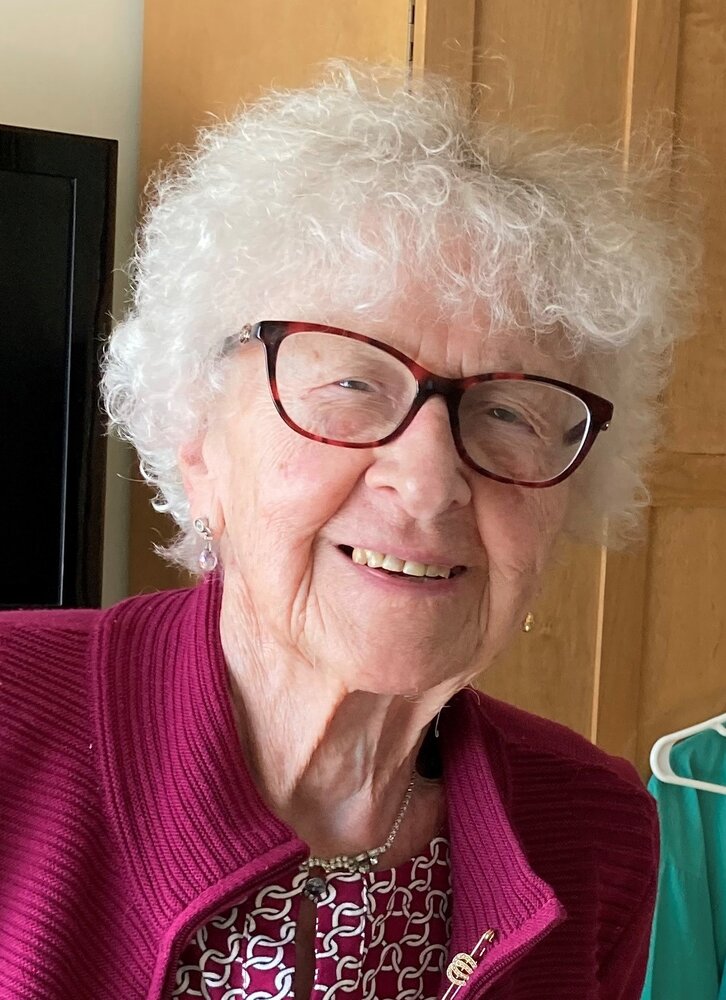 A memorial service to celebrate the life of Marie will be held Saturday, May 21, 2022, at 11:00 a.m. at Birchwood Funeral Chapel, Steinbach, MB. To join the family via livestream, please click HERE

Marie passed away peacefully at the age of 98 on Friday, April 22, 2022, at Bethesda Place Personal Care Home (PCH) in Steinbach.

Marie was born to Aaron L. and Katherina (Loewen) Friesen on Dec. 13, 1923, and grew up in the town of Gretna, Manitoba.

Marie married the love of her life, Leonard “Leo” Funk, on Aug. 28, 1955. She took great delight in her family and was very proud of their three sons and daughters-in-law, grandchildren and great-grandchildren. She enjoyed the time spent with each one.

Marie’s career followed a number of different paths after her high school graduation from the Mennonite Collegiate Institute in Gretna. A move to Winnipeg led to administrative work for Björn Kjellström and the Silva compass company’s entry into the Canadian market, and for A.J. Thiessen of Thiessen Bus lines. This time also included a stint with the Manitoba Telephone System. Mom then went on to pursue teaching, a path also taken by her siblings. She completed Normal School training and taught in a variety of communities including Brunkhild, Rhineland, and Steinbach (Kornelsen School). Following her marriage to Leo, she took on full-time parenting where early family life often included traveling to road construction sites where Leo was employed with Paul Braun Construction, Brandt Construction, and then later with Penner Construction. But, Steinbach soon became their life-long residence. As their children grew and entered school, she was recruited to become the Welcome Wagon Hostess for Steinbach, a role in which she excelled with her friendly and hospitable personality. She was recognized for her 25+ years of welcoming folks, as well as new babies, to the Steinbach community. Following Leo’s death in January 2015, Marie moved to Bridgepark Manor and enjoyed this new community of contemporaries from her years of living in Steinbach. Just prior to her 98th birthday, Marie moved into Bethesda Place Personal Care Home where she appreciated the care and attention she received.

Marie’s faith and church life were very important to her. She and Leo became active members of the then Steinbach Bergthaler Church, which later became the Christian Fellowship Church. She frequently participated in various ministries like Women’s Sewing Circle, teaching Sunday School, and singing in the choir. In her retirement years she also sang together with Leo in the 55 Plus Choir in Steinbach. She was a faithful prayer warrior, always concerned that her kids, grandkids, and great grandkids would choose to become followers of Jesus.

Marie is predeceased by her parents Aaron and Katherina (Loewen) Friesen; brother and sister-in-law, Ernie and Elizabeth Friesen, sister and brother-in-law, Anne and Henry Goertzen.

A memorial service to celebrate the life of Marie will be held Saturday, May 21, 2022, at 11:00 a.m. at Birchwood Funeral Chapel, Steinbach, MB. To join the family via livestream, please click HERE

The family would like to thank the staff at the Bethesda Place PCH for the wonderful care they provided to Marie during her last 5 months.