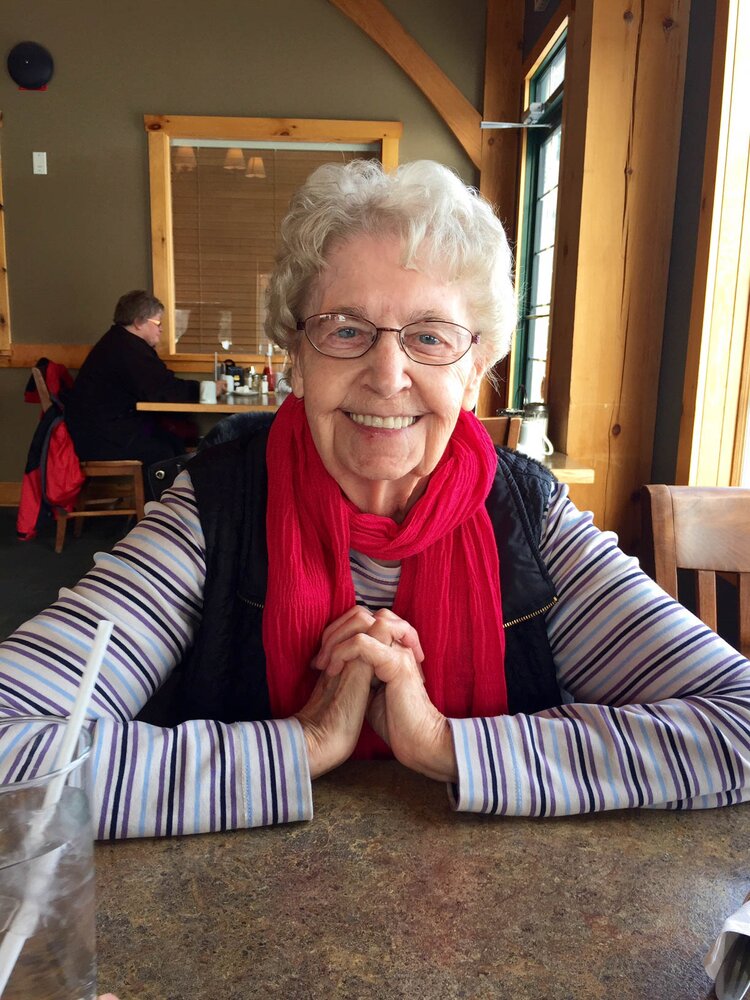 Our mother, grandmother and great grandmother Sara Friesen passed away Friday, April 29, 2022 at the Bethesda Hospital in Steinbach.

Sara was born July 5, 1928, the youngest of eight children to Abraham and Elizabeth Wiebe of Lowe Farm, Manitoba.  Mom is survived by her sister Ann Kushner.  Mom married David Friesen on July 16, 1949.  Together they had six children.

Mom grew up on a farm.  Her father, a veterinarian, passed his love of animals on to her.  From her mother she received her quiet nature and her love of cleanliness.

In the mid 1950’s mom fully supported dad as he entered the ministry.  She played that role to the best of her ability all while being the primary caregiver for their six children.  Together they pastored the Morris Mennonite church for nearly 15 years.

The doors of our 700 square foot bungalow were always open to visiting missionaries from multiple countries.  Mom often said in spite of the inconveniences of hosting guests for night she felt blessed to have her children experience foreign countries through the life and eyes of these missionaries.  God also used mom and dad to do a church plant in Richer Manitoba and also lead a small church in Kenora Ontario.

Mom and Dad operated a mixed farm of grain, laying hens, cattle, hogs and dairy all while dad managed the Rosenort Credit Union for 17 of those years.  Mom was always thankful for our mixed farm and large garden because she knew there would be plenty of food to feed her family for the next year.

Mom and dad travelled extensively across Canada, US, South and Central America, Africa and Europe.  Mom enjoyed each trip but was always glad to be home.  They made numerous trips with grandchildren to Africa, Mexico and US.  As they aged, the trips became shorter.  They travelled by bus with grandchildren to Minneapolis to watch their favourite baseball team: the Toronto Blue Jays.  Mom remained a Blue Jays fan her entire life.  One summer they directed a bible camp in Quebec.  The highlight of all her travels was six months spent working for MDS in South Carolina after hurricane Hugo.  Experiencing a southern culture (she hasn’t eaten a sweet potato since), and perseverance of the people who underwent extreme poverty; working side by side with numerous multicultural groups brought her much satisfaction.

Mom cared patiently and quietly for dad in his last months after being diagnosed with pancreatic cancer.  Dad passed away in 2007.

Mom enjoyed hosting pizza parties as she called them whenever the family was able to get together in the summer.

After the age of 90 life became a little challenging.  While she was grateful she was able to live on her own, she rarely left her condo. Receiving company was a special highlight particularly if you came with treats like an ice cap from Tim’s, a chocolate fudge Sundae from DQ, Strawberry tart from MJ’s or coconut cream pie from Oakridge.  After she would chat about the inconveniences of her health, she would always say “God is so good.  He has been with me in the past and He won’t leave me now”.  Using her term, she “motored” in her condo with her walker saying “Old age is not all its cracked up to be and whoever talked about the golden years didn’t know what they were talking about.”   She never failed to ask if our families were OK and she never missed standing at her patio door waving goodbye as we left her apartment.

Our mom Sara Friesen leaves a legacy of grace and unwavering faith.  She is survived by her six children, 18 grandchildren and 28 great-grandchildren:

Daughter Audrey & Harry Brandt of Niverville, and their children:

Son Gary & Rowena Friesen of Nashville and their children:

Daughter Gwyn & Larry Kornelson of Winnipeg and their children:

Daughter Sandra & Balex Kabamba of Winnipeg and their children:

Son Mark Friesen of Steinbach and his children:

We want to express our dearest thanks to:

The public memorial service will be held Thursday, May 5, 2022 at 2:00 p.m., at Birchwood Funeral Chapel, Steinbach, MB, with interment at Heritage Cemetery, Steinbach, MB. To join the family via livestream please click HERE shortly before the service.

Donations in memory of Sara may be made to the Mennonite Disaster Services.