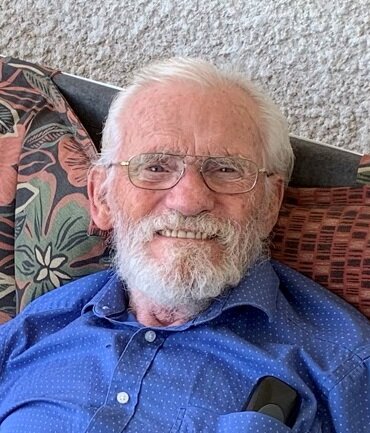 A funeral service will be held on Tuesday, May 17, 2022, at 2:00 p.m. at Steinbach EMC, Steinbach, MB., with a viewing at the church prior to the service.  To join the family via livestream, please click HERE

Cornelius Plett, born September 27, 1935 to Jacob and Helen (Reimer) Plett, of Steinbach, MB passed away peacefully on Thursday, May 12, 2022 at his home.

He was predeceased by his wife, Berni Plett, and four siblings (Violet Wall, Jake Plett, Tillie Loewen, and Trudie Friesen) and daughter-in-law Lenore.

As a young boy, Cornie, along with his family, moved to Mission, BC for a short time, where his Father was employed as a work-hand on various fruit farms. The family all picked berries, raspberries, strawberries and hops. They returned to Steinbach, trying their hand at mixed farming.  Later on, the family started a butcher shop which became known as “Plett Vurst”.  As a young man Cornie also worked as an electrician.

Cornie started dating Berni at age 15, and so deep was his love, that he often reminded his children of the first time he kissed her, even his homecare workers were told this story.  Cornie was in love with Berni from the first day he saw her in a potato field.  He offered to carry her crate of potatoes, but in her own feisty manner, she said “No! I can do my own work.”.  Nonetheless, this relationship blossomed into a loving five year courtship, during which time they devoted themselves to ministry.  Their shared love of music grew throughout their life together. Directing choirs, leading and singing in groups, Cornie singing with Berni, the family singing together, were the many ways in which Cornie loved to serve through music.

Cornie was married on June 24, 1956 to Berni Toews, of Steinbach, MB. Together they ministered in various communities in Canada and the USA.  He first pastored in Wymark SK, followed by Burns Lake BC, Winnipeg (Aberdeen church and then Braeside church), attended seminary in Fresno, CA, and pastored in nearby Reedley CA,  then back to Winnipeg at Braeside and Douglas churches.  He also taught at Steinbach Bible College, and pastored in Snow Lake until Cornie retired at the age of 65.  Even in retirement, Cornie served as interim pastor at Crestview church, then continued to serve others as chaplain at Woodhaven and Cedarwood apartments.  Even in the last months of his life, and in spite of poor eyesight and physical limitations, Cornie would naturally show love and care to the numerous caregivers that would visit him by praying and blessing them during their visits.

In the midst of the many years of service, Cornie had a wide range of interests.  Along with taking long summer road trips with Berni and their children, he loved golfing with friends, and enjoyed making use of the pastor’s discount he got at Girouxsalem golf course.  He also enjoyed fishing and doing yardwork.  Cornie had a passion for travelling, so after having attained his Class 1 drivers license, he found time to take the occasional trip as a long distance driver for Reimer Express and Penner International trucking.  While pastoring in Snow Lake, Cornie was trained as a first responder and ambulance driver.

In the midst of Cornie’s life story of love, service and devotion, another chapter must be told.  He also faced periods of depression at various times in life.   While depression was a challenge, and at times debilitating, he sought professional help, he prayed, he read, and he focused on gratitude, all of which deepened his empathy and understanding as he cared for those who faced similar struggles.

All who knew and loved Cornie will miss him deeply.  His dry humor, his smile, his storytelling, his love for Scripture and his deep compassion for others will live in us not only as a memory but a way to live.

A funeral service will be held on Tuesday, May 17, 2022, at 2:00 p.m. at Steinbach EMC, Steinbach, MB., with a viewing at the church prior to the service. To join the family via livestream, please click HERE

Much thanks to all the homecare and Silverlining workers who took such beautiful loving care of Dad. Also we are so grateful for Doctor Karen Toews’ care and even personal house calls she made to dad. We’ve also been very blessed by Debbie Krahn and the Palliative Care team.

Get Directions
Tuesday
17
May