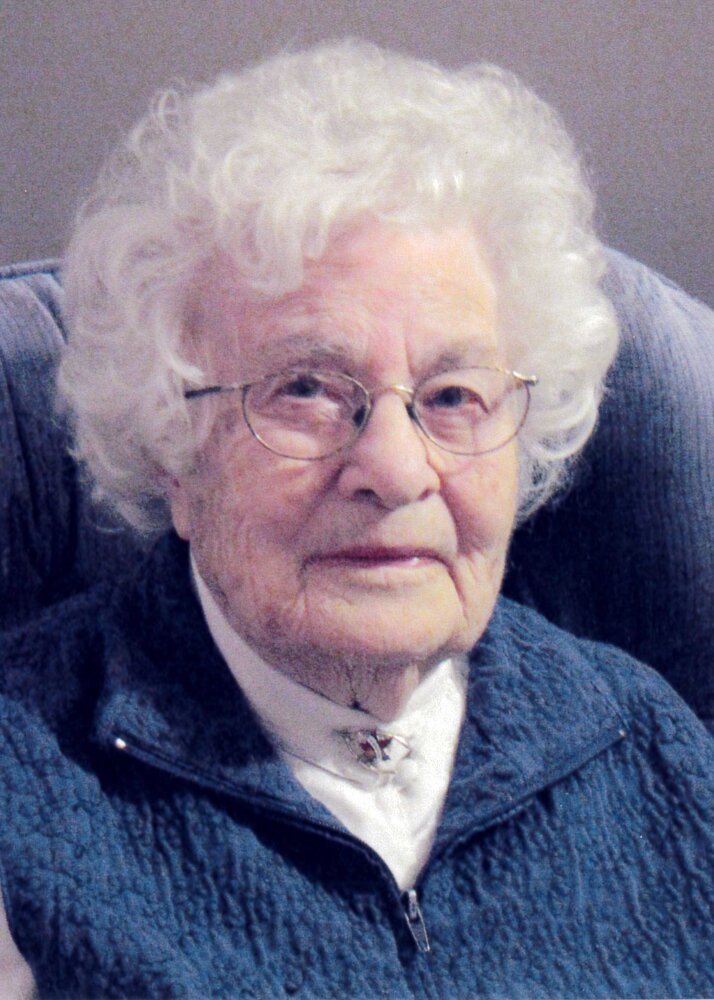 The funeral service will be held Monday, June 6, 2022 at 2:00 p.m. at Birchwood Funeral Chapel, Steinbach, MB., with interment at Grunthal Cemetery.  To join the family via livesteam, please click HERE shortly before the service time.

Catherine (Kay) Harder of Grunthal, formerly of Winnipeg and Kleefeld, passed away on Saturday, May 28, 2022, at the age of 100 years and eight months.

She leaves to mourn her passing, her sister Lena Bartel, brother Ed and Lena Harder and sisters-in-law Anne Harder (Harry) and Anne Harder (Peter) as well as many nieces and nephews.

I Have a Story to Tell   by Kay Harder

I was born September 14, 1921, weighing in at approximately 7 lbs, at my Grandpa and Grandma Harder’s farm in Silberfeld. My Grandma was a midwife. I went to elementary school in Niverville until I was nine and attended German night school once a week from ages seven to nine.

When I was nine years old we moved to Kleefeld and lived on a farm about two miles from town. Because of the mixed farming we did, we always had sufficient food on the table.  We had five gardens, one being all potatoes. School was three miles away from home and we had various ways of getting there. Many a time we walked. Sometimes a good Samaritan gave us a ride. Other times we took the sleigh and horse with old Peter Friesen taking us. We also went by dog and toboggan at times. After the good old Ford car came, Dad took us on occasion.  Our parents were extra good to us!

When I was 19 years old, a friend, Dorothy Buhr asked me to help clean their house because she was planning on getting married outside under the trees at home. She explained to me that when they asked a Bergthal minister to marry them, he could not marry them because they were not born again. So he explained it to them and they were truly born again. The Holy Spirit kept them in Christ Jesus for the rest of their lives.

Then Dorothy asked me if I didn’t want to be born again. Of course in that day I didn’t know what that meant. My parents had taught me about Jesus dying on the cross, rising again, and that he is coming back again but the new birth was foreign to me. Since I was scared of God and of dying, I consented to kneel down by her bed and she gave me the words to say:  Jesus forgive my sins and come into my heart. When I went home that day, I knew that something inside me was different. I couldn’t explain it, but I knew something changed. Was someone praying for me? And the Lord Jesus has kept me all these years, born again in the power of the Holy Spirit. Yes, I have failed Him, but He has never failed me.

When I was 20 I attended Winnipeg Bible Institute together with my sister Aggie and her husband, Jim Enns. Dad helped me with the finances at the time. I also had a part-time waitress job to help support myself. It was called “The Homestead”.

In 1952, I took a one-year Licensed Practical Nurses course. In January, 1953, I applied for work at the King George Hospital due to the biggest Polio Epidemic.  I worked there for seven and a half years. Then, because there were four from our family expecting babies, and I was scared to hold a baby, I applied at the Women’s Pavillion and worked in the nursery for three and a half years. Then I decided to make a change so I wouldn’t forget everything I had learned. I applied at the Misericordia Hospital and worked there for almost 23 years.

In 1986, the year I turned 65, I retired from work. I slowly weaned myself from city life to live with my mother, who still lived in a house in Grunthal, my dad having passed away in 1979 at the age of 81. To my surprise, I found that my 86-year-old mother still believed she could do everything herself, including gardening. In 1991, we decided to move to a two-bedroom apartment in Oakview Manor on Main Street, which we enjoyed until my mother was having a problem breathing and general weakness. We moved her to the Menno Home on November 29, 1999, where she lived until her passing, at almost 100 years old, on June 27, 2000.

Now here I am again living by myself, still in Grunthal.  God planned it all and I’m thankful He did the planning. Mom used to say:  “Der Mensh denkt, aber Gott lenkt”.

Kay moved into the Manitoba Housing units in 2002 and then into the Menno Home for the Aged in 2012 where she lived until her passing. She is now home with Jesus.

The funeral service will be held Monday, June 6, 2022 at 2:00 p.m. at Birchwood Funeral Chapel, Steinbach, MB., with interment at Grunthal Cemetery.  To join the family via livesteam, please click HERE shortly before the service time.

Donations in memory of Kay may be made for camper sponsorships to Roseau River Bible Camp Box 110, Roseau River, MB., R0A 1P0. or send an etransfer to office@roseauriver.ca ~  please add note for the Jared Zacharias Memorial Scholarship Project.