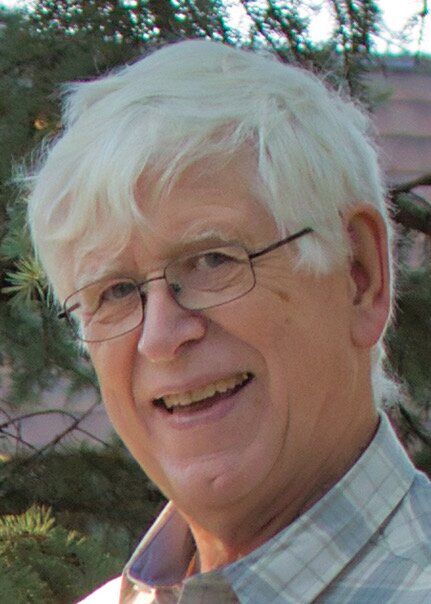 Donald Edmund Collins, youngest child of James and Mary Collins, was born on July 12, 1945. He passed from this life into the arms of Jesus, with Lois at his bedside, on Saturday, August 13, 2022. He was 77 years old.

Don is survived by Lois, his wife and best friend of 52 years; by his children, Melanie and Jon Mushaluk, Keith and Tannis Collins, Stephanie and Brent Woelke, and Bethany and Dave Miller; and by his 13 grandchildren—Ethan, James, Owen, Adeleine, Elinore, Kai, Veda, Milla, Abigail, Jack, Imogen, Emric, and Gus. He also leaves two brothers and their wives, and many other extended family members and friends.

Don grew up on a farm near Kenaston, Saskatchewan, and walked to school—uphill both ways, as he said. Immediately following high school he enrolled in Teacher’s College in Saskatoon. During his time there, he attended an evangelistic crusade, where he received Christ as his Lord and Saviour.

After teaching for four years, Don enrolled at Prairie Bible Institute, where he met Lois. She soon noticed his bright blue eyes, warm smile, gentlemanly demeanour, musicality, and sense of humour; it wasn’t long before she also discerned his patience, wisdom, and leadership skills, along with his love of Christ—something which they shared. Don and Lois were married after graduating from Prairie in 1970.

Don became the pastor of two small churches, in Leader and Burstall, Saskatchewan. Two years later Don and Lois moved to Moncton, New Brunswick, with Don’s appointment as the Atlantic Director of Child Evangelism Fellowship, or “CEF”. They soon came to love the East Coast, with Cape Breton being a favourite vacation spot.

In 1978, Don was invited to be the National Director for CEF, and the family, now including Melanie, Keith, and Stephanie, moved to Winnipeg, where Bethany would be born. During his time as National Director, Don loved to care for the overseas missionaries. He was a servant-leader to them, working tirelessly behind the scenes, and was instrumental in making a number of strategic moves, ensuring that individuals were serving in places of “good fit”. Don travelled to numerous countries, and was able to visit many missionaries personally, becoming dear friends with them. Serving on the Executive Committee of CEF of Nations, he treasured his interactions with CEF leaders from around the world.

After 33 years with CEF, Don began work with Open Circle, a prison ministry of Mennonite Central Committee. He enjoyed surprising people by telling them that he had been in and out of prison many times.

Don enjoyed serving on various ministry boards, such as Missionfest, the District Board of the Evangelical Free Church, and Canadian Sunday School Mission—now “One Hope Canada”. He was respected for his thoughtfulness, attention to detail, verbal acuity, and insight.

From 2009 until his retirement in 2011, Don served as the National Director of One Hope Canada, guiding it through a major reorganization. He continued actively to support One Hope Canada in various roles until early this year (2022).

Don was a self-taught plumber, electrician, carpenter, and all-round handyman. He worked hard, but he also knew how to play, tinkering with projects in his workshop, and enjoying games with his family. An avid reader, he loved the English language, frequently showing his quick wit with words. Not many knew how much he enjoyed listening to Classical music.

His grandkids will miss sharing with him in puns, table games, and Meccano builds, and hearing his thoughtful questions and encouraging messages. His children will miss being able to call on him in emergencies, reading his loving thoughts in birthday cards, benefitting from his ingenuity and creativity, and experiencing his support and care. Lois, his sweetheart, will miss his strong shoulder to lean on, his wonderful humour which made her laugh every day, his willing, practical help with daily chores, his organization throughout the home, his encouragement, and his prayers.

Don’s trust in God’s sovereign and loving hand allowed him to accept his grim cancer diagnosis with courage and peace. His prayer to the end was, “Fill us with power; flood us with peace.” God answered that prayer for him and will continue to answer it for us.

A celebration of Don`s life will be held at Calvary Temple in the Buntain Chapel at 440 Hargrave Street, Winnipeg, MB, on Monday, August 22, 2022, at 2:00 p.m. (Visit ctwinnipeg.com to view the service by livestream.) Interment will precede the service at 11:00 a.m. at Chapel Lawn, 4000 Portage Ave.

In lieu of flowers, donations can be made to One Hope Canada or Canadian Cancer Society.