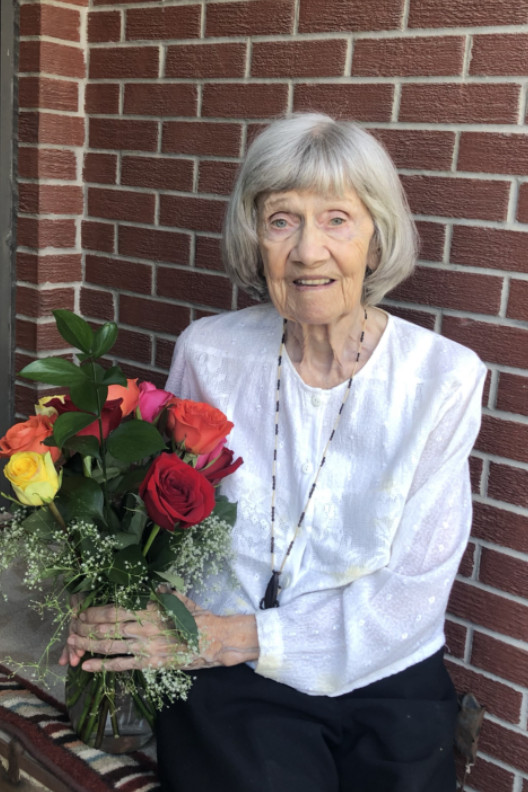 The memorial service will be held on Monday, August 29, 2022 at 6:30 p.m. at Birchwood Funeral Chapel, Steinbach, MB. Burial prior to the service at Prairie Grove Cemetery. To join the family via livestream please click HERE shortly before the time of the service.

Nettie Buhler, loving sister, aunt and friend, passed away at Victoria Hospital, Winnipeg, MB., on Sunday, August 21, 2022. She was born on July 14, 1928, the seventh of 17 children born to John and Nettie Buhler in Rosenfeld, Manitoba. From there the family moved to Mullingar, Saskatchewan, when she was six months old. In 1939, they moved to Arden, Manitoba, where she grew up.

Nettie looked at the tragedy of the drowning of her older brother as a turning point that God used to bring the family to the Lord. After she met the Lord at the age of 18, she ministered to children by teaching Bible classes in several public schools near Ochre River. The next step was working in Winnipeg where her older sisters were already working.

Nettie enrolled at Winnipeg Bible Institute. While studying there, the president of Gospel Missionary Union presented the needs in foreign missions. She was interested in the ministry in Alaska, but during her candidate time she realized that God had called her to serve in Ecuador. Nettie graduated from the school and then went on to go to school in Steinbach, receiving her license as a practical nurse in 1962.

In 1963, Nettie began her missionary journey with Gospel Missionary Union in Ecuador. She spent the first years learning the Spanish language. While learning the language she taught Sunday School and hosted visitors and tourists. She spent a year in Sucua, where she assisted with the medical clinic and helped in the church. Later she moved to Macuma to reach out to the native Shuar people (traditionally known as headhunters). She was in charge of the clinic. Once an RN came to work at the clinic, she was able to teach Bible classes and work with young people & women. She continued to serve in other places in Ecuador and assisted in ministry in a variety of ways. She retired from the mission in 1994.

After a short time of serving in Texas, Nettie made her home in Winnipeg.  She was involved in ministry at the Nassau church, with Child Evangelism Fellowship and worked with Chinese students.

Nettie’s hobbies included creating sketches and paintings. She loved to keep a garden and flowers. She easily sewed without a pattern. She enjoyed the times she spent with her siblings and many nieces & nephews, as well as meeting with other single gals. Nettie enjoyed her years at Bethel Place and then spent almost two years at Riverside Lions.

Nettie is survived by four brothers, one brother-in-law, two sisters-in-law, as well as many nieces and nephews and their families. She was predeceased by her parents John and Nettie Buhler, five sisters and seven brothers, one niece and one nephew.

The family would like to express their thanks for the staff at Riverside Lions for their love and care, as well as the staff at Victoria Hospital for their care of Nettie for the month before her passing.

The memorial service will be held on Monday, August 29, 2022 at 6:30 p.m. at Birchwood Funeral Chapel, Steinbach, MB. Burial prior to the service at Prairie Grove Cemetery. To join the family via livestream please click HERE shortly before the time of the service.

If friends so desire, donations in memory of Nettie may be made to Avant (Missions) Ministries Canada.