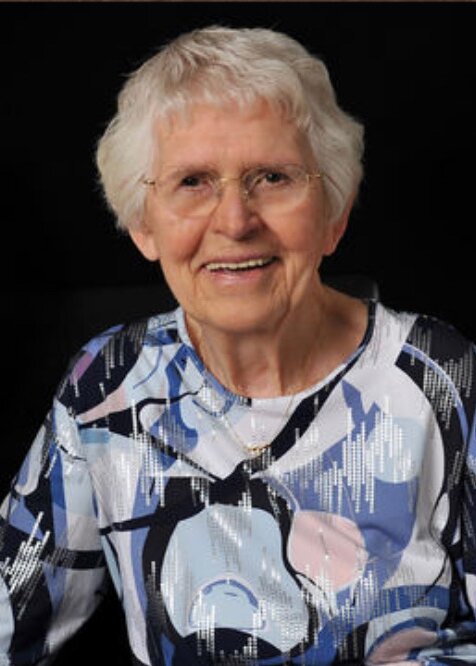 After many years of appreciating good health and fulfilling countless goals and aspirations, Susie Esau of Steinbach, MB, passed away on August 25, 2022, at age 94. We are grateful for the late-stage care and support that she received from professionals and family members during the past few weeks, enabling her to pass away peacefully while in Palliative Care at the Steinbach Bethesda Hospital.

She was predeceased by her husband, Peter Esau, in 1978; by brothers Ben, Ed, John, Arnold, Irwin and a sister Linda who died in infancy.

Mom’s parents were Bernhard and Lena Heinrichs. Her father was a farm labourer, which meant that they lived wherever Grandpa could find work, and therefore they endured an endless number of moves. Pay was extremely poor and living conditions were shoddy, even for those days. Household conveniences and luxuries were nonexistent.

Being the third child in a family of ten meant that Mom had to take on a significant role in helping with household chores and looking after her younger siblings. Despite the workload at home and the challenge of moving from school to school, she completed grade eight and shortly after started working at various housekeeping jobs for neighbours to help her family pay the bills.

Our parents, Peter and Susie, were married in Lowe Farm on October 21, 1947. In 1948 they moved to Grunthal and bought a 40-acre farm north of the village. Here they raised some livestock and milked a few cows while Dad worked at the Grunthal Cheese Factory to supplement the income.

In 1952 our parents bought a 160-acre farm in the Bristol School District southwest of Steinbach, where they raised their five children and struggled to grow their dairy operation. Even with farm production on the increase, Dad continued to supplement the farm income by working at various jobs such as the sugar beet refinery in Winnipeg and on construction for the Manitoba Telephone System. Sometimes these jobs took him away from home during the week, so the workload was especially heavy for Mom during these times. She had to look after the family, put food on the table, do the household chores, and take care of much of the milking and barnyard chores. Eventually Dad gave up employment, doubled the size of the acreage, and for the first time became a full-time farmer.

Back then, Mom achieved a great amount of satisfaction from planting, weeding, and harvesting her large gardens that contained many varieties of fruits and vegetables. She was resourceful; nothing went to waste. The result was a cellar full of all kinds of fruit preserves, jams, sauces, juices, and pickled vegetables. We did not have a freezer in those days, so Mom also canned various kinds of meat, which meant that there was always a “takeout” meal (including dessert) for when she had limited time to cook or if we had unexpected guests show up for Sunday lunch after church. We were fortunate to have had a selfless, caring, and hard-working Mom. She had an enormous workload, but she stayed on top of it quietly, without complaining, despite many backaches and pains.

Dad had a heart attack around 1971 that really slowed him down, but with the help of the boys the family was able to continue farming. In 1974 he was diagnosed with cancer and shortly after suffered kidney failure. It was time to sell the farm. On July 1, 1976, Mom and Dad moved to a small acreage just outside of Steinbach. After a long battle with his illness and surviving for about a year with the aid of a kidney dialysis machine, Dad passed away on February 1, 1978, aged 53.

Eventually, maintaining the acreage became too demanding for Mom, so in 1992 she moved to a bungalow on a smaller lot in the Town of Steinbach.

Mom has enjoyed a tremendous amount of travelling in her retirement years. She has travelled by bus, car, and air from coast to coast within Canada, and to many places in the U.S. She has been to Vancouver Island, Alaska, Newfoundland, Washington DC, New York City, New Orleans, Denver, Colorado Springs, and many other destinations.

In 2007, Mom decided it was time to sell the single detached home in Steinbach and move to a third-floor condo where she would not have the responsibility of any exterior maintenance. It was a very good move for her; she really enjoyed all the benefits of that lifestyle, especially the social atmosphere.

After all the years of hard work on the farm, Mom adjusted well to a slower lifestyle when she retired. She was never bored and always kept her hands, feet and mind productively busy! She enjoyed a long list of activities, including quilting, sewing, cooking, and baking. She also occupied herself with puzzles, reading, and various games. Mom was blessed with the gift of hospitality and anyone coming to her home at any time enjoyed a delicious home-cooked meal, which was always finished off with home-baked pie, cinnamon buns or other sweets. No doubt, Mom enjoyed cooking and baking for her family, especially for special occasions, but her greatest satisfaction came from the opportunity to pass on her culinary skills to her grandchildren, teaching them to bake bread, make perogies, and prepare other traditional dishes.

Mom really enjoyed puzzling. She would spend many hours at her table working on her two or three-thousand-piece projects. Her oldest grandson, James, loved to challenge her with various games and extremely complex puzzles. A few years ago he bought his Grandma a puzzle that was labeled "The World's Most Difficult Puzzle". Mom was very competitive and never wanted to concede defeat to anyone or any project; however, after many hours and much effort at her table, she finally admitted that she terminated the project, although she likely never did admit defeat!

Due to COVID and self-isolating regulations a few years ago, it wasn't feasible for families from Ontario to visit her in Manitoba, so arrangements were made to gather at a cottage in Northwestern Ontario in the fall. Mom was still healthy enough to make the trip, and it was a great blessing for her and others to spend several days together and enjoy that visit.

Mom was saved as a young woman and baptized in the Lowe Farm Bergthaler Church. After dad passed away, she spent endless hours serving at the Steinbach Christian Fellowship Church with the sewing circle ladies, and even served as president for a season or two. Having been widowed young she also became a close friend and taxi driver for other widows from the church who often called on her for rides. For many years she helped to prepare for the seniors’ lunch which was held at the church monthly, and she finally “retired” from serving the seniors at age 80.

Mom didn't often speak of her personal faith and love for the Lord, but she expressed her love and gratitude by faithfully caring for her family, and without fail, demonstrated her gift of hospitality to everyone who came to her home. She also exemplified a spirit of forgiveness - responding with gentleness; contentment - always thankful within all circumstances; and perseverance, throughout her entire life, even to her last days.

We are comforted by the words in the Bible, 1 Thessalonians 4:13 - We do not want you to be uninformed, brothers and sisters, concerning those who are asleep, so that you will not grieve like the rest, who have no hope.

Mom’s hope was in Jesus Christ knowing that being absent from this body she would be present with Him in heaven as it says in 2 Cor 5:6-8.

You’ve done well Mom - you fought the good fight, finished the race, and kept the faith.