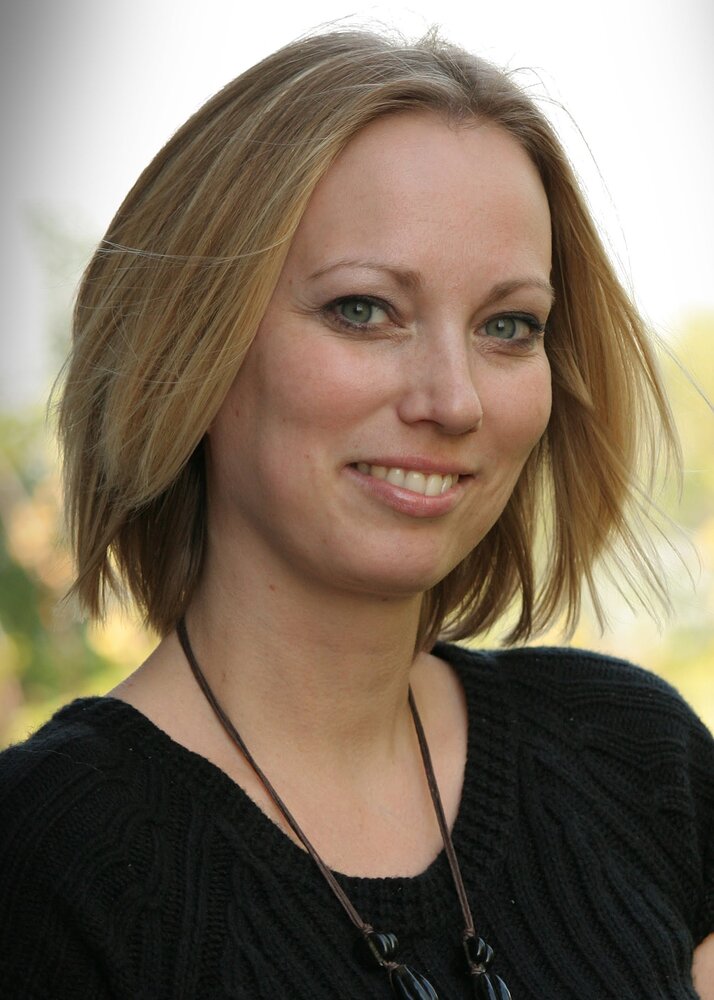 A celebration of her life is planned for December 29, 2022, at 1:00pm at Birchwood Funeral Chapel in Steinbach, Manitoba. To join the family via livestream, please click HERE shortly before the start of the service.

It is with the deepest sorrow we announce the passing of Elin Rasmussen Hiebert, age 47 of Niverville, Manitoba. Elin passed away peacefully at home surrounded by her family following a 3 ½ year battle with brain cancer on Saturday, December 17th, 2022.

Elin was born Elin Rasmussen to parents Tone (née Moen) and Tor-Egil Rasmussen on January 9, 1975, in Notodden, in the province of Telemark in Norway. Her father passed away when she was three years old and she, her older sister Anne-Marith, their mother, and their grandmother lived on a small family farm for most of her formative years. At 16, Elin’s mother remarried a local man, Kjetil Frøland and Elin gained a stepfather who doted on her and her sister.

She was very involved in youth groups and choir and developed a real heart for people. Her love for cooking and baking was born here too and she used it in good stead all through her life.

In 1994 at the age of 19 she decided to go to Capenwray Bible School in Carnforth, England, where she met and fell in love with her future husband Clint Hiebert, from Niverville, Manitoba. A short courtship ensued and within a couple of weeks of meeting each other, they began dating.

After Capernwray, Elin moved back to Norway to finish some schooling, and then made the decision to move to Manitoba, Canada, to be closer to Clint as well as further her education. Elin enrolled at Providence Bible College and Seminary to work on her degree in Sociology.

Elin and Clint moved to Niverville, and she began the work to attain her status as a landed immigrant. During this time, she volunteered in several places, including at their home church doing secretarial work.

Once Elin was granted landed status she began working at Southern Health in Steinbach, Manitoba, directly under the Medical Officer of Health, where she worked as an admin until her first child, Eilish was born in 2001. From 2001 to 2014 Elin made the decision to stay home and raise their 4 children: Eilish (2001), Liam (2003), Kylah (2005) and Keegan (2007). In 2014, she returned to work at Southern Health, this time in the area of mental health, again as an admin.

Elin has always been known for her huge heart and love for people. She loved to entertain, cook, bake, and just sit and get to know people as they really were. She was always available to hear someone out or encourage them. People were simply drawn to her because she was always so genuine. Her heart was first and foremost for her family, though, and she made sure everything she did in life did not take away from precious family time.

She loved to work alongside Clint to help bring the dreams they shared to fruition, whatever it was. Every house they built she got in and laboured tirelessly, often painting and cleaning all by herself it as it was being built. She was no stranger to hard work and loved to see the fruits of her labour. She was always the first one to get up and get something done.

She loved to adventure. She was always a ‘yes’ when anyone would propose a camping or fishing trip, a hike or some travel. She loved walks in the woods in BC and loved standing on the beach in the rain. Her eyes would light up when she was able to discover new things and new places.

In 2019, after a few years of preparation, she and Clint made the decision to pick up their lives and move to British Columbia, to follow another dream that they both had shared for many years. “I want to be where the mountains meet the ocean” was what was said over and over. They sold their last house and in August of 2019 they packed up and were ready to move.

Several weeks before leaving she experienced a sharp and enduring migraine that never went away, and finally a week before leaving in August 2019 she was diagnosed with stage IV Glioblastoma Multiforme, a rare and deadly brain cancer and given between 6 and 12 months to live. This forced them to change their plans to move and stay in Manitoba to fight the disease, as the care she needed was more accessible where they lived. She beat her prognosis by 3 more years and fought a courageous and amazing fight, right to the end. She finally passed from this life to the next on Saturday, December 17, 2022, in the arms of her husband and surrounded by her children.

Through it all, Elin’s faith in God did not waver and she did not complain. She spoke much of this life and the next, and always said that although the next life would probably be great she didn’t feel she was done yet or ready to go. Too much to do.

She is survived by her beloved husband Clint, their daughters Eilish and Kylah, sons Liam and Keegan, and sister Anne-Marith Rasmussen, her stepfather Kjetil Frøland, various uncles, aunts, and cousins in Norway, and extended family in Canada. She is predeceased by both her parents.

A celebration of her life is planned for December 29, 2022, at 1:00pm at Birchwood Funeral Chapel in Steinbach, Manitoba. To join the family via livestream, please click HERE shortly before the start of the service.

Elin will be laid to rest at Heddal Stave Church in Norway on April 28, 2023.

If friends so desire, in lieu of flowers please consider making a donation to Wheels of Hope, the CancerCare charity that provides rides to cancer patients to and from the hospital.