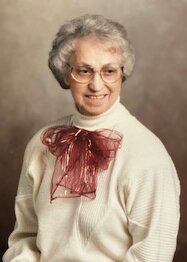 A funeral service with a light lunch and open mic will start at 10:30am on Wednesday, January 25, 2023, in the East Chapel at Birchwood Funeral Chapel in Steinbach, MB. Interment will follow. To join the family via livestream, please click HERE shortly before the start of the service.

She is survived by her children, Allan (Laura Sue) Dueck of Hyattsville, MD, Stanley Dueck of Peterborough, ON, Rosemarie Dueck of Calgary, AB, and Lynnette D'anna of Winnipeg, MB.

Pearl was renamed Helena when she was taken in as a one-year-old by her adoptive parents, Anna (nee Reimer) and Peter U. Kornelsen. They raised her, along with sister Elizabeth and foster brothers Jacob and Peter Kroeker, in the Manitoba community of Heuboden. She remembered hers as a happy childhood in a loving family. Her greatest regret was that, as a Mennonite girl, she was not allowed to complete her high school education.

In 1943 at the age of 21, Helena Kornelsen married Ben B. Dueck, son of Anna (nee Barkman) and Peter R. Dueck in the neighbouring village of Kleefeld. Ben's teaching career moved their growing family from Winnipeg to McTavish to Blumenhof to Grunthal before they settled in Steinbach in 1963, where Ben taught English in the high school. They were active members of the Steinbach EMC congregation for more than forty years.

Helena used her considerable talents and skills to keep her family of seven well fed and clothed on a budget. Her children were blessed to wear her beautifully tailored clothing, and to enjoy her bright patchwork blankets and the handmade quilts that kept them warm through the long, cold Manitoba winters.

Every autumn, she preserved, canned and froze enough garden produce to stock her pantry for another year. She was a gifted home cook. Her flavourful soups and other traditional Mennonite dishes, and her baked breads, zwiebach and pies were staples in her kitchen.

After Helena's mother died in 1959, she cared for her father until he remarried. In addition to raising her five growing children, Helena worked independently through the sixties to complete her secondary school education by correspondence. In 1968, at the age of 46, she finally fulfilled her dream of graduating from high school.

She tenaciously searched for her birth mother for decades until she found her in the mid-seventies. Pearl Smith (nee Krouse) had also long been searching for the daughter whom she had named Pearl in 1922. Helena was embraced by the whole Krouse family, and she was delighted to claim her Scottish ancestry. Their reunion put to rest her lifelong fear that she had been unloved and unwanted by her birth mother. She changed her name to Pearl Helena to honour both her mothers in 1979, after she and Pearl reunited.

Writers' groups and conferences became an integral part of her life after raising her children. An accomplished writer, she wrote a weekly news column for The Carillon, chronicling the social life of Steinbach and surrounding communities. She also wrote a regular Toastmasters report, and hers was invariably among the winning entries in The Carillon's annual Christmas story contest which she entered every year. Pearl Helena was a devoted reader, and if there was quiet in her home, she could usually be found curled up with a book. She passed on her great love of reading to all her children.

Her hands were seldom idle. She was always doing what she could to lighten someone else's burden without thought of personal reward. Her deeply-held Mennonite faith was her guiding force, and her strong belief in God's love comforted her throughout her life.

Pearl Helena's family is grateful to the staff and companions at Newport Harbour Care Centre in Calgary for their dedication to maintaining her quality of life during her final years. They also thank Rosemarie Dueck and family for the countless hours devoted to caring for her over the past seventeen years. Special thanks to Choice Memorial in Calgary and Birchwood Funeral Chapel in Steinbach for tending to the family's needs professionally and with compassion.

A funeral service with a light lunch and open mic will start at 10:30am on Wednesday, January 25, 2023, in the East Chapel at Birchwood Funeral Chapel in Steinbach, MB. Interment will follow. To join the family via livestream, please click HERE shortly before the start of the service.

The family welcomes donations to MCC Manitoba in lieu of flowers.