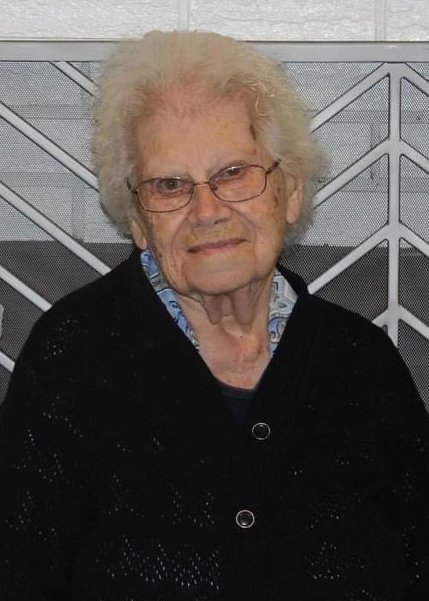 She is survived by her nieces and nephews, and their families: Gordon Enns; Marilyn Kroeker, and her daughter, Jenna (Ellery Burton); Garth Enns and son Brayden; Bev (Brian Jantzi their daughters (Becca and Dan Kobus with Riley, Kylie and Aubrie); Ashley, Kayla, and Megan; Sherri Enns and cousins in Manitoba, Ontario, BC and Brazil.

Susie Enns, was born to Aron Enns and Katharina Neufeld Enns on April 27, 1924 in Ohrloff, Molotscha, Russia. At the age of five, Susie with her parents, sisters: Katie and Agnes; and Brother Willie (Bill) immigrated to Canada. After living a few short years in Steinbach, they settled in Pigeon Lake, where they lived with their uncle, Isaac Berg until buying a farm in the Ekron School district near Friedensfeld in 1941.

Susie enjoyed attending school in St Francois Xavier until grade eight. Her mother encouraged all her children to read and Susie continued to read until her death. After grade eight she helped on the farm and in 1958 went to work for Bethesda Regional Health Centre in the laundry and later sterilization departments until after the age of 65. She made many lifelong friends at the hospital and recognized many of them during her on and off stays in recent years. She recalled the time in the Blizzard of 1966 when someone picked her up on snowmobile and drove her to work. Quite exciting for her.

She loved writing letters. Susie and her pen pal, Bea Preston, from BC, wrote each other regularly for over 80 years, meeting each other once when Bea and her husband visited Steinbach. She had exquisite penmanship and her handwriting was admired by many. She also wrote many journals, documenting her workdays, church activities and visits with friends and family.

As a teenager, she accepted Jesus as her Saviour and remained faithful all her life. She was baptized at the Sargent Mennonite Church, later becoming a member at Steinbach Mennonite Church. She enjoyed all church activities, Ladies groups, making blankets, swapping recipes and socializing.

She was able to travel during her retirement, taking bus trips; a highlight was a 14-day tour to Eastern United States and accompanying her mother to visit Aron’s Family in Ontario and cousins in Brazil.

Susie enjoyed many happy years living at Linden Place, making new friends during their daily game nights, bible studies and other activities. Her hobbies included reading, crosswords, Scrabble, Skip-Bo and many other games. Many benefited from her knitting and crocheting skills with blankets, scarves, mittens, dishcloths, and socks. She volunteered many years at the MCC thrift store until her early nineties. Her favorite task was sorting linens. She also brought fabric home, continuing to sew in her spare time.

It was a sad day for her when she had to give up her car at 90 years old. She had learned to drive at age 30, chauffeuring many people to appointments in Winnipeg and touring the countryside for Sunday afternoon drives. All her life she was relatively healthy until a few years ago when she had heart issues and mini strokes. At age 95 she had a pacemaker put in.

Thank you to the many friends who picked up Susie for lunches, MCC volunteering, church activities, appointments, grocery shopping, etc. She always appreciated all the rides and enjoyed the time spent together.  A special thank you, to the staff and residents at Linden Place for looking after her over the years and to all of the wonderful healthcare workers at Bethesda Regional Health Centre who showed so much kindness and consideration toward Susie. We want to further acknowledge her homecare workers who she always looked forward to seeing, as well as Dr. Jessica Allen who gave Susie such compassionate care.

The come & go viewing will be held on Saturday, October 17, 2020 from 2:00 p.m. to 4:00 p.m. at Birchwood Funeral Chapel, Steinbach, MB. Interment to take place at Heritage Cemetery following the viewing.

If friends so desire, donations in memory of Susie Enns may be made to the MCC or to Youth for Christ, Steinbach.