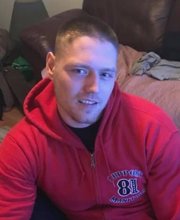 It’s with heavy hearts that we have to announce the sudden passing of our son, Michael Carriere at the age of 32, in Winnipeg, Manitoba, on Sunday, January 3, 2021

Michael is predeceased by his grandmother, Carol Curtain (Summers) and his father, Edward Domino. His cousin Derek Fletcher and his dog Bolo.

Michael spent his young life on his grandparents farm, his love for animals kept him occupied for hours on end. When Michael got tired you could find him napping in the bales with the family dogs.

Michael attended Richer School for his early years, before moving to Winnipeg for High School.

Michael was a hard worker and was employed in the areas of construction and landscaping. He was ready to embark on new adventures of work in Northern Alberta and was quite excited when talking about it.

You could often find Michael pulling pranks and jokes on loved ones and friends. When reminiscing about some of the things he did, you could hear his infectious laughter from across the room. He certainly had a knack for pulling these things off.

He was adventurous and always on the go. With the many friends he had there was never time wasted, .....  except when making sure he looked good and everything was in place.

Michael had to have things perfect and sometimes this got in the way with finding peace in certain areas of his life. He was often hard in himself and in return worked even harder to gain that perfection. Not always successful, causing much disappointment in himself.  He didn’t like asking for help as he knew he could it himself.

He was unsure which pain was worse, the shock of what would happen, or the ache of never doing.

Michael will be forever loved and missed by many.
May you R.I.P and find the beauty and pleasure heaven has to offer.

When tomorrow starts without me,

And I’m not here to see,

If the sun should rise and find your eyes,

Filled with tears for me.

I wish so much you wouldn’t cry,

They way you did today,

While thinking of the many things

We didn’t get to say.

I know how much you love me,

As much as I love you,

And each time you think of me,

I know you’ll miss me too.

When tomorrow starts without me,

For every time you think of me,

I’m right there in your heart.