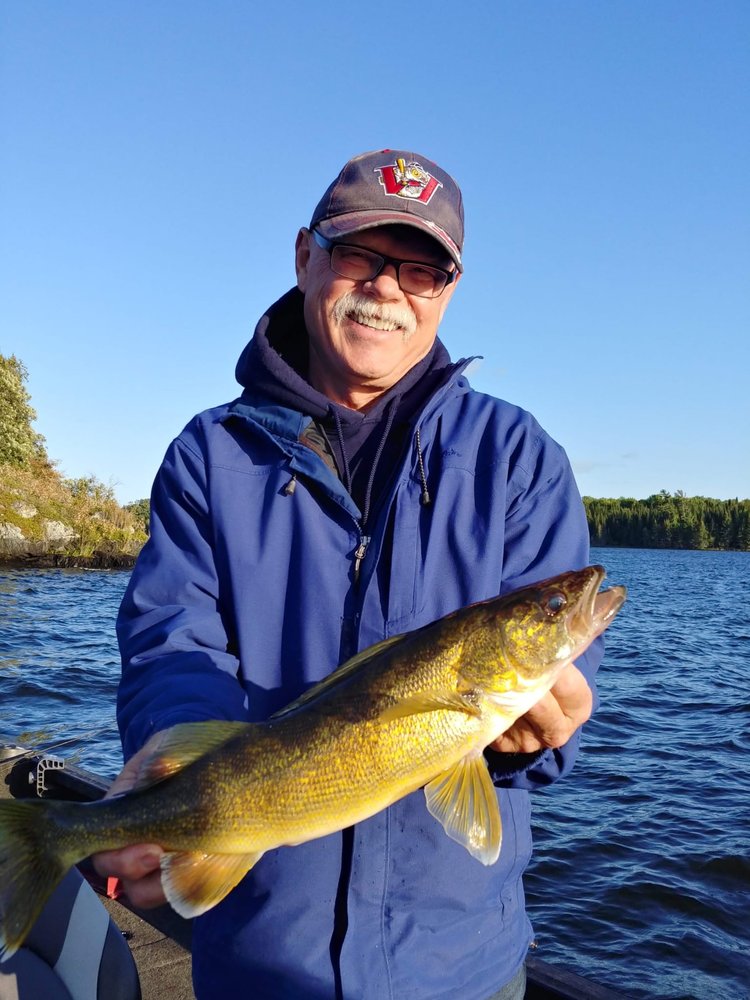 Daryll Fenton, 68, of La Broquerie, Manitoba, passed away suddenly on Saturday, May 29th, 2021. He was doing what he loved, fishing with his wife and dogs at Moose Lake, Manitoba.

He joins his father and mother, John and Joan, as well as his sister, Gwen, in Paradise.

Daryll was a loud and vibrant character. He had a love of life that overflowed into all that surrounded him. He loved to meet new people. He would make new friends everywhere, whether it was in his daily life, or when he was traipsing about the world. Going anywhere with Daryll was always a risk because you knew if anyone talked to him, you’d be stuck there for hours as he chatted aimlessly to whomever the poor sucker was. If you got him started on a subject he was especially interested in, you’d never get a word in edgewise. One of his favorite subjects were his grandkids. He would beam with pride as he talked about their antics, or how they were doing with school or activities.

Daryll had an adventurer's spirit. He would jump into each exploit with reckless abandon. He was often searching for new things to try and do, or places to go. He loved to travel; his dream was to one day own a motorhome and just drive wherever he wanted to go. He lived his life with no regrets and charged headfirst into any challenge, often knocking his head in the process.

Daryll LOVED broken things and broken people. He was a fixer. If he couldn’t fix it, he’d find a way to turn whatever was broken into something useful and loved-even if it turned out to be more inconvenient and time consuming. He didn't replace anything on a whim. This passion was poured into his cars and trucks, and his many ‘toys’ laying about the house. It was poured into finding houses that needed some love. It was poured into animals that were broken by birth or abuse. We will never forget his love for a small, deformed kitten or how broken he was when it was time to put him down. Or the lengths he went to, to save his dog when she was injured. Most importantly, it cascaded into people who needed to be loved. There are so many people Daryll cared about and would speak of often, as he gazed out into the sky as if he was saying a mental prayer for them.

Daryll loved to be outside. He is missed by his dogs Eddison (Eddy) and Remington (Remi), as they would be by his side when he was scouting out new areas to go hunting. He loved to be on a lake fishing or going camping, whether it be at a provincial campground or some place he just found out in the middle of nowhere. If there was something to do, and it could be done outside, that was where you’d find him. He’d often take his morning coffee on his deck, just enjoying the beauty of God's Creation.

Daryll’s greatest Pride was in his children and his eight grandchildren. He loved taking his grandchildren on his adventures and teaching them skills that they would need later in life. Some of his happiest moments were spent with his grandkids in his boat, catching their first fish. He loved to be with his grandkids when they experienced something new. When his children were hurting he worried for them and did what he could to help. He was determined that all of his kids and grandkids would be able to do anything they wanted without anything holding them back.

The most important thing in his story, Daryll loved Jesus Christ. He wanted everyone to feel the peace that he had from his faith. He was up every morning doing his devotionals. He would work his Lord and Savior into every conversation he had. He loved to be a part of his church, working in the Cafe where he could chat with people as they came in. He enjoyed studying his bible with his cell group, and his bonds with people through Jesus Christ were unbreakable. Jesus’s love and handiwork is surrounding his death which makes it so easy to know that Jesus called him home according to HIS timing.

In lieu of flowers, we ask that Donations be made to the HEART team. Daryll had a special place in his heart for the Hutterite people, and he was a fan of the HEART team preceding his death. To have them be a key component in his recovery is not lost on any of us. We wish his death to be a blessing to the HEART team so they can continue to bring closure and healing to families of tragedies like ours.

The memorial service will be held at a later date once restrictions allow for a larger gathering. Please check back for futher details.

Cheques can be sent and made payable to: HEART Team Inc Box 819 Morris, MB R0G1K0 or visit the website to find other ways to donate. https://www.hearteam.ca/donate/