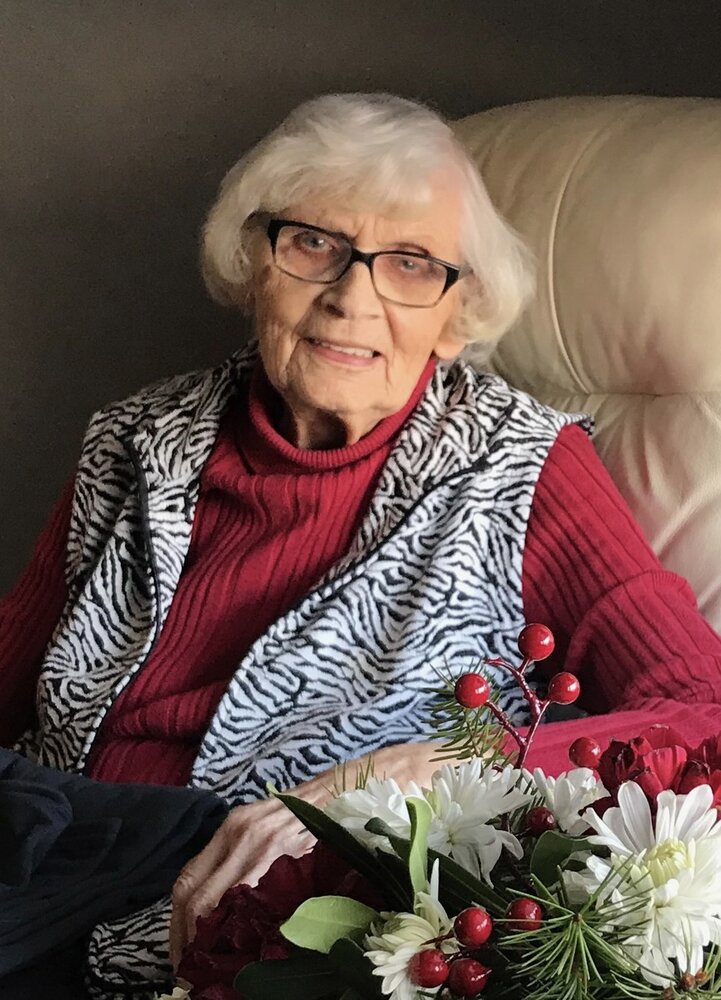 Leona Toews Rempel passed away peacefully on Wednesday, January 26, 2022 at the age of 97 at Bethesda Regional Health Centre.

She is survived by her two children, James (Cindy Driver) of Brooklyn, NY and Margaret (John Wiebe) of Steinbach; her grandchildren Brett Daley (Winnipeg) and Meredith Hutchinson (Scott) of Steinbach and her very special great-granddaughter Aubrey.

Leona was predeceased by her husband Arthur B. Rempel, her mother Helen Hiebert Toews and her father, Jacob Toews.

Leona was born on March 27, 1924 in Steinbach, MB. Her father died when she was only 5 and her mother, who had been a school teacher, was dismissed because of her widow status. The small family of two survived by taking in boarders and fostering children. Despite a tough childhood, Leona thrived in school and was on a path to university when a cheating scandal within the senior examination process prevented her entry. She found her way into the medical field, initially at Misericordia Hospital and then at Bethesda Hospital as an x-ray assistant.

She married Arthur in 1944. In their home together, Leona was the hostess. She loved entertaining and any reason was reason enough to celebrate and gather with people. She and Art housed medical students and Mennonite Central Committee trainees and missionaries. She always seemed to know who needed an invite for a warm meal in a cozy home. Even if you entered her house as a stranger, you left a friend. Her love of baking fed many families over the years; she was humble and generous and always thought of others before herself (maybe to a fault; she could hardly bear to ask someone to please pass the salt!).

Gardening was another great love, one she probably inherited from her mother. She had a huge garden on Hanover Street. When they moved into Bridgepark Village, she had a small plot dug out next to their patio so she could plant tomatoes, cucumbers and flowers. When she moved into Bridgepark Manor, her small deck had to have flowers.

Traveling was something both Leona and Art enjoyed immensely, from the east coast to the west coast of Canada, almost all the US states and Europe. In the mid 70’s they started traveling by motorhome. Winter months saw them heading to Florida, summer trips with the grandchildren to any place with a pool or  beach and in fall, they headed east to “see the colors”.

Leona’s family meant everything to her, particularly her two grandchildren and later, her precious great grandchild. Any time she could spend with them was special. Whatever they were involved in, she wanted to be there, cheering them on. Even in her last days and hours, she was asking about school and work and life at home.

Her faith and community were important to her; she had a servant heart. She sang in the EMB church choir, taught Sunday School and played a central role in opening the church library. Leona and a small group of citizens helped start the public library and the Southeastern Manitoba Music Festival in the 60s.

She was an intensely curious person and an avid reader, consuming every newspaper and every book. Well into her 90s, Leona could keep up in a conversation about politics, religion, education or sports.

When her husband died, Leona moved to Bridgepark Manor. Life shifted to a slower pace; she loved her recliner, the local evening news, her ipad (keeping in touch with family and friends by email, even at the age of 97!) and the Jets hockey games. At one point during a short hospital stay, she told the family she wouldn't need a tv in her room; the Jets were sidelined due to Covid so she saw no need for it.

Leona always took everything in stride, even when she knew her journey on earth was coming to an end. She was very content when admitted to palliative care; her first comment was, “Well, I didn't want to live to be 100!” She spent her final weeks surrounded by family - both in person and online - and was very humbled when messages came pouring in from friends and family all over the globe. We will remember our mother and our mama for her strength, hospitality, charm, cinnamon buns and her commitment to faith, family and friends.

The family wants to offer their deepest gratitude to Dr. Karen Toews, who has been such a strong and loving support for our whole family in the past years. We want to also thank the Home Care staff and the nursing staff at Bethesda for their patient and gentle care of her. Special thanks to Pastor Mel Letkeman for his prayers and comforting presence the past number of years. She was blessed with a team of angels guiding her home.

My latest sun is sinking fast, my race is nearly run; My strongest trials now are past, My triumph has begun.

I've almost gained my heavenly home, my spirit loudly sings; the holy ones, behold, they come! I hear the noise of wings.

O, come, angel band, come and around me stand, O bear me away on your snowy wings to my immortal home.

Cremation has taken place. A private family memorial will be held at a later date.

In lieu of flowers, donations can be made to The Bethesda Foundation.