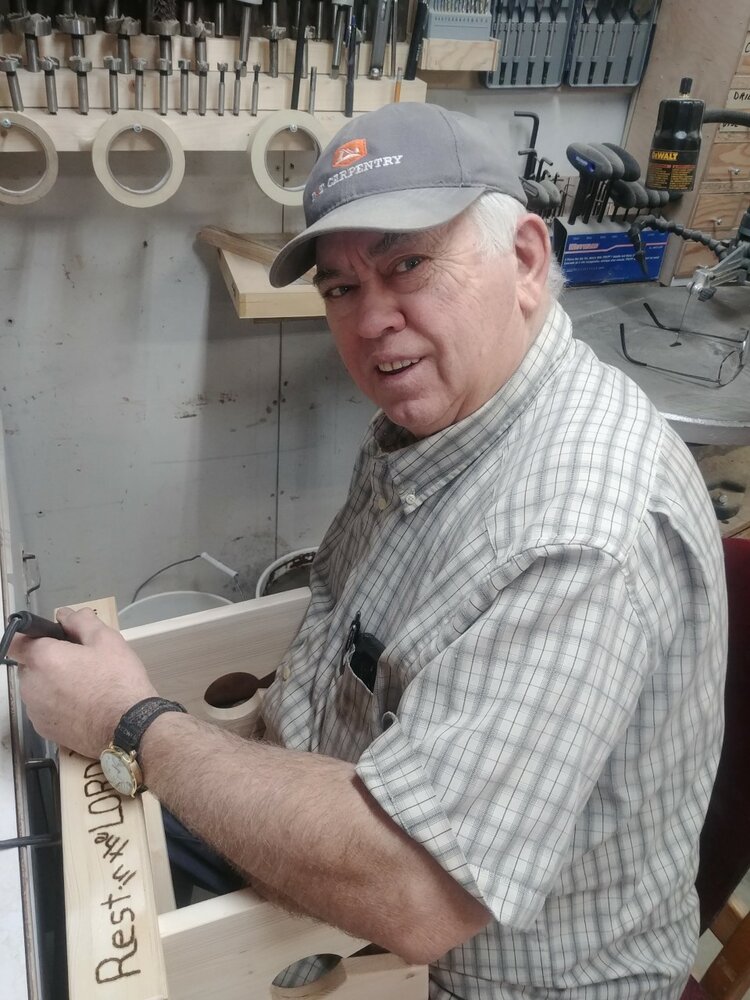 WHITMAN, Lester, age 68, of Grunthal, Manitoba, passed away peacefully on Thursday, March 17th, 2022 at the Health Science Centre in Winnipeg.

Lester was born in Osterwick, Manitoba near Winkler to parents Lester and Helen Whitman on February 4th, 1954.  He married Susanna Reimer on May 4th, 1975 in Winkler, Manitoba. This union was blessed with five children. They later moved to an acreage near Grunthal.  In his teenage years he professed his faith in Jesus Christ and became a member of the Winkler Sommerfeld Mennonite Church. Over the years, he served in various capacities in the church he attended, like Sunday School teacher and Board Member. He enjoyed creating unique Christmas gifts for his students.

His first job was at Morden Tom Boy, and then he went to Monarch in Winkler and worked at various places throughout his life including Rempel Cabinets, Loewen Windows, Mid Canada Millwork and with his carpentry skills he was self employed for many years.   He was known for his business Lester’s Workshop.

Lester was a quiet man, with few words but strong faith and concerned for his family. He prayed often and would go to work early to have time to read his bible before starting the day. As a result, he had a generous spirit and pleasant personality, and was loved by many. His influence will forever remain in the lives of all who knew him.

Lester is preceded in death by his sister Kathy and her husband Dennis Atkinson, brother George and his wife Agatha Whitman, two brothers-in-law Dave Friesen and George Klassen, two grandsons Mason and Jadon as well as his parents Helen & Lester Whitman.

The public viewing will be held on Tuesday, March 22, 2022 from 7:00 - 9:00 p.m. with a devotional starting at 7:30 p.m. at Birchwood Funeral Chapel, Steinbach, MB. To join the family via livestream please click HERE shortly before the viewing.

The public funeral service will take place on Wednesday, March 23, 2022 at 2:00 p.m. at New Bothwell Sommerfeld Church, with burial at the church cemetery. To join the family via livestream please click HERE at the time of the service.

Donations may be made to Birchwood Funeral Chapel to help the family cover funeral expenses.

The family wishes to extend our sincere thanks to the paramedics, the staff at Health Science’s Centre and the staff at Birchwood Funeral Chapel.