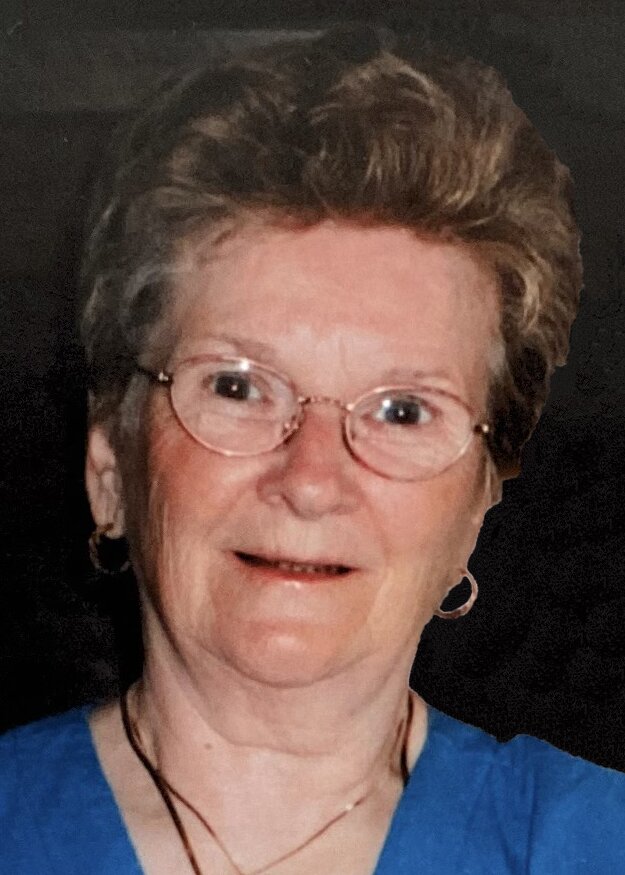 A celebration of Val’s life with be held on Monday, June 13, 2022 at 1:00 pm at Birchwood Funeral Chapel in Steinbach, Manitoba. Cremation has taken place. To join the family via livestream, please click HERE.

Valerie Penman passed away peacefully at age 91 on June 4, 2022 at the Niverville Heritage Life Personal Care Home. She is survived by her children Pamela (Roy) and Stephen & Sheri, grandchildren Kathryn, Taylor, and Tanner, and numerous nieces and nephews.

Val was born early in the morning on Valentines Day in 1931, hence her name. She was the sixth of seven children born to Charlie and Elsie Steadman in Wolverhampton, England. Val grew up in England during World War Two which came with many challenges such as food rations and the constant threat of bombing. This taught her to be thrifty and make do with the little that they had.

Val married her first husband at nineteen and had her daughter Pam in Wolverhampton before emigrating to Canada for the first time two years later. She lived in many places in Ontario including Toronto, Barrie, Orillia, and Owen Sound before divorcing and moving to Winnipeg. She later remarried and moved back to England in 1964, this time to Blackpool, which is where her son Stephen was born in 1966. A year later they returned to Winnipeg where she continued to live until her marriage dissolved. In 1981, Val married Dave and they enjoyed retirement life living in Sandilands together and eventually moved to Steinbach.

Val had many jobs over the years and was well-loved by all her employers. She worked as a telephone switchboard operator, a receptionist at a doctor’s office, and a childminder. She also worked in a clinic, in retail sales, and was employed at Autopac for many years. While living in England, Val ran a Bed & Breakfast.

Val was always willing to try new things. She loved dancing, especially ballroom dancing, in her younger years. She was taught a variety of dances by her sister Joan (known as Daisy), and she was a natural. She was offered a job as a dancing instructor at Arthur Murray’s dance studio in Winnipeg. Val retired at the early age of 53 and explored a variety of hobbies. She enjoyed painting landscapes on canvas as well as painting animals and buildings on rocks. Val loved to bake delicious treats for her family and made everyone’s favorites. She was known for baking elaborate birthday cakes for her grandchildren. Caring for her beloved dog Mandy, tending to her many house plants and picking blueberries brought her much joy. Val also joined the choir at Emmanuel Evangelical Free Church and loved the sense of community she felt there.

Family was always the most important thing in Val’s life. She adored her mother and father, and she and her sister Daisy were as close as any two sisters could be. They caused trouble and hilarity wherever they went. Laughter was guaranteed whenever Val was with her family. The thousands of miles that separated them never got in the way. Val was the best mother to her children and considered herself very lucky to have a daughter-in-law with whom she was very close. She was a doting Nana to her grandchildren and loved them dearly. She spoiled her children and grandchildren with love and treats. She would defend them to anyone and was fiercely loyal.

Val’s health difficulties began in 2010 when she had her first stroke. A second stroke in 2014 propelled her into the advanced stages of dementia. At that point she went into nursing care and spent time at the Vita Personal Care Home, Bethesda Place, and finally the Niverville Heritage Life Personal Care Home. Even though her mind was deteriorating, she remained very talkative and grateful to her family and the staff in the care facilities. Her unfiltered, vibrant personality shone through, and she charmed everyone with her witty remarks. Val loved her regular visits with Sheri where they would listen to music and eat chocolate together, both of which brought her joy.

We want to extend a massive thank you to the wonderful staff at the Niverville Heritage Life Personal Care Home for taking such good care of Val over the past 4 years. We are grateful for their loving care and attentiveness.  We are sad that she is no longer here with us, but we are so happy and thankful that she is fully healed now.

A celebration of Val’s life with be held on Monday, June 13, 2022 at 1:00 pm at Birchwood Funeral Chapel in Steinbach, Manitoba. Cremation has taken place. To join the family via livestream, please click HERE.

In lieu of flowers, donations can be made to the Niverville Heritage Life Personal Care Home Memorial Fund.