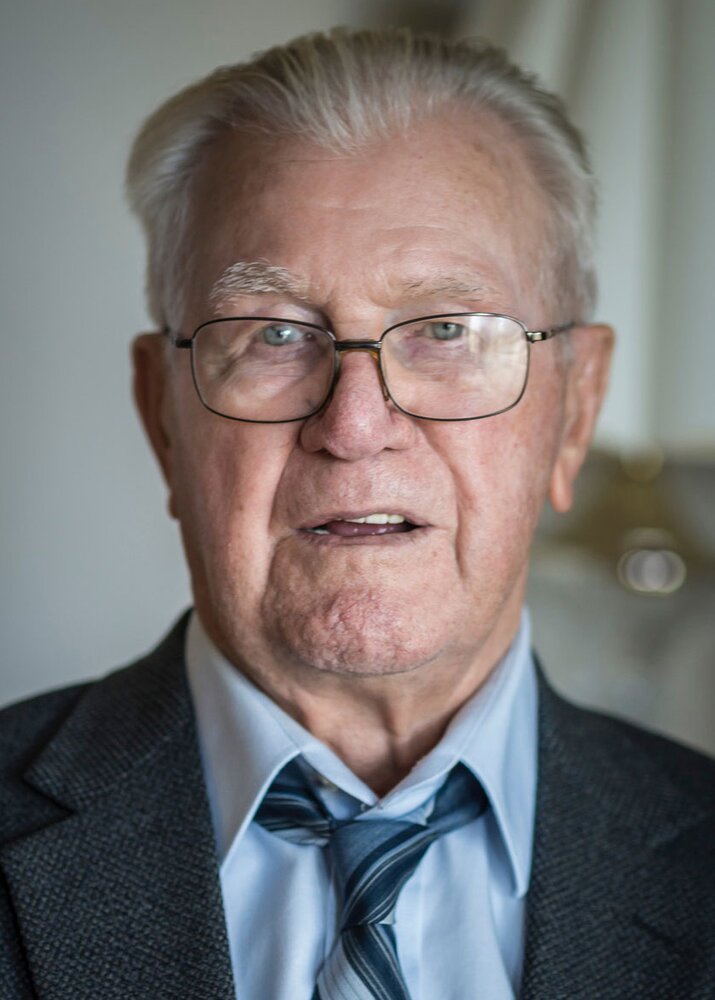 A joint funeral service for Corny and Helga Nikkel will be held Friday, August 5, 2022 at 2:00 p.m.. at the Steinbach Mennonite Church, 345 Loewen Blvd, Steinbach, MB.

To join the family via live stream, please click HERE

Cornelius (Corny) Nikkel was born Kornelius Nickel on April 12, 1926 in Steinfeld, USSR to Kornelius and Justina (née Peters) Nickel. He was the second of four children, the two eldest, boys, the two youngest, girls. His mother died in childbirth when he was only five years old. A few years later his father married Susie Berg and they had two sons together, giving Corny two half-brothers, Franz and Peter.

In 1929, when word spread of an opportunity to exit the USSR and its farm collectivization programs, to which they had lost their farm, the Nikkel family abandoned their home in Steinfeld and joined thousands of other Mennonite families in Moscow, hoping to obtain exit visas and immigrate to Canada. While some families were allowed to leave, for many Mennonite families the effort was futile, and eventually the Nikkels had to give up and return to Ukraine. Not having a home to return to in Steinfeld anymore, they relocated to the village of Schoeneberg in the Chortitza Colony.

One night in 1938, when Corny was twelve, his father was arrested in the middle of the night while the children were sleeping. They had no chance to say goodbye, and they never saw him nor heard from him again. Corny’s father was one of many men taken in this manner in those days. Most ended up doing forced labour in the forests of Siberia, but others died along the way and some were simply put to death. The family never knew what became of their father, but losing him precipitated the breakup of the remaining family: Corny and his brother Hans went off to live and work in other households, the two sisters were taken in by other families, and the two half-brothers remained with their mother.

In addition to the loss of both parents and home in his early years, Corny grew up amid famine and war and his education was mostly a secondary concern. His schooling years, few as they were, were mostly in Russian, a language not spoken at home or in the village. After four years in the local primary school, he and his brother would walk 5 kilometres to a school in Osterwick, the neighbouring village. Dad never spoke of this as a hardship; rather it seemed an opportunity, even though most of his school stories were about not quite getting there. There were too many friends, open fields, gopher holes, fruit trees and other distractions along the way. Corny seldom wanted to talk about the difficult times of his youth. He preferred to reminisce about pleasant things like a day of herding cattle with his father or an evening of raiding orchards with his friends.

Then came the war. In 1944, at age 18, Corny, along with others from his village accompanied the retreating German army on the trek out of the USSR. Travelling on foot alongside draught animals and wagons, they walked through muddy terrain and hostile territories, foraging for anything to eat and taking shelter when and where they could. He told about finding eggs and consuming them on the spot, raw, and about eating potato peelings that someone else had thrown away. For the rest of his life he would refuse to eat potatoes with peel. After months spent fleeing, Corny wound up in a refugee camp in Annaberg where he and other displaced Germans received six weeks of training for the German army. Despite the depleted state of the German military at that point, Corny was too small to be accepted into its ranks. If there was any silver lining to come from years of malnutrition, this was it. Our mother always said it was God’s grace that spared him serving in the German army. So, instead of joining the German war effort, Corny found work as a labourer on the German railway, working for two years in various locations in eastern and then southern Germany.

In 1947 Corny joined a group of 29 young Mennonite men in a group immigration to Canada, supported and coordinated by Mennonite Central Committee. Coming over in a ship, they arrived in Halifax and then took a train to northern Ontario, where they worked for the winter in a lumber camp in the Nipigon region. It was here that Corny had a growth spurt, growing several inches at age 21, and he credited the lumber camp life for this. This was a special time for Corny, and he often reminisced about the companionship, the abundant food, the hard work in the winter snow, the fresh air, and the generally wonderful treatment they received from the lumber company. He made lifelong friends in the lumber camp, and he and Helga always looked forward to their periodic ‘Lumberjack Reunions’.

After working in the bush to repay the costs of his voyage to Canada, Corny moved on to Manitoba to his uncle Peter Nikkel’s farm in the Steinbach area. This was where he found a home and a family for the next few years. He worked summers as a farm labourer, winter in the bush. After several years of this routine, he was hired at Neufeld’s Garage in Randolph and this was the first step on his path to being a master mechanic. Corny worked at a number of automobile repair shops over the course of his career, including Regehrs, Loewen Chev-Olds and L A Barkman (later Brookdale). Finally, before retirement, he had a short stint as a machinery repairman at Loewen Windows.

Corny liked to work hard and claimed that it cured many ills, but he also had other interests in his life, like church and family and friends.

On May 28, 1950, Corny was baptized on his confession of faith by Elder Johann Enns and became a member of the Elim Mennonite Church in Grunthal. In 1955 he transferred to the Steinbach Mennonite Church, where he remained a loyal member for the rest of his years, attending regularly and serving variously as usher, offering counter, etc. He was a willing worker and a conscientious member of the congregation. Corny lived his faith quietly, but his actions carried the weight of many words.

On June 5, 1955, in the Steinbach Mennonite Church, Corny married Helga Hildebrand and they began a long and happy life together. They complemented each other well and had four children: Rudy, Walter, Linda and Irmgard (Irmy). Corny could be a stern father and didn’t believe it was good for children to be coddled, but his love for his children was never in doubt. Summer vacation road trips were big events, but there were also the day-to-day pleasures: fishing expeditions with the Banmans, drives to the Nikkel farms to see how the harvest was going, regular trips to the Unger sisters’ farm to get fresh milk – we’d get on the gravel road and Dad would stop, slide over, and let one of us children drive the rest of the way.

Corny was a sociable person and he loved spending unstructured time visiting with family and friends. In retirement, as he had more time available, he did more and more visiting and more and more travelling, often with friends. Corny and Helga made several trips to Germany, took memorable vacations in Hawaii, Florida and Alaska, bus tours to eastern Canada and USA, train trips to Churchill and countless road trips to Ontario, BC, and northern Manitoba to visit family. Mom and Dad also loved to gather with friends to play table games, and especially in the later years in their Bridgepark apartment suite, they spent countless nights sitting with friends, talking, laughing, and playing card games or dominos.

Corny enjoyed a quiet and modest life. He valued doing what was right and he took pride in staying within his means. He derived a lot of joy from simple things, like taking long vigourous walks, going for drives, sitting quietly in the sunshine, or having a stimulating argument. He followed world events closely, he loved to read and listen to music. While his early years were very hard, his later years were easy and pleasant and Dad never took that for granted. He was always thankful, and quick to say how lucky he was to have been able to come to Canada and to make this place his home, to live in peace, to worship freely, to do good and be content in his life.

Some years ago Dad began to show signs that he was losing his memory. He’d always been a good chauffeur and careful driver, but now he was losing confidence in his ability to find his way around. Corny liked to be proactive, so one day he marched over to the RCMP office and handed in his driver’s license, declaring that he would not need it anymore. He did not want to drive unsafely and did not want to be in a situation where others would have to take his keys away. As time went on and his memory loss and confusion became more acute, it became harder for Mom to look after him. In 2018, Dad moved into the Bethesda Place Personal Care Home. Though his cognitive abilities continued to diminish, Dad was happy, compliant, and content in his new home. He continued to enjoy reading, often aloud. And he continued to enjoy socializing – especially with Mom. Until her recent illness, Mom visited him regularly, almost daily. Our visits with him would usually end with an appreciative “Come again, soon. Drop in any time.”

In early July of this year, Corny had a fall, and that ended his ability to stand, walk, and to feed himself; it was the beginning of the end. He slipped away in the night of July 23, 2022.

Helga also moved into Bethesda Place in early July, just down the hall from Dad. It was a blessing that the two of them could spend some time together in the last weeks of their lives.

In lieu of flowers, if friends desire, donations may be made to MCC or the Canadian Food Grains Bank.

A joint funeral service for Corny and Helga Nikkel will be held Friday, August 5, 2022 at 2:00 p.m.. at the Steinbach Mennonite Church, 345 Loewen Blvd, Steinbach, MB.

To join the family via live stream, please click HERE